Dumped rubbish, dodgy parking and public vandalism are the biggest gripes angering Australians, with people pulling out their phones to dob in their neighbours for bad behaviour more than 160,000 times this year alone.

The most common complaint nationwide is dumped rubbish, with more than 75,000 reports submitted to local councils so far in 2022. Victorians contributed the majority of these complaints, sending 43,456, while it was also the most common gripe for West Australians. 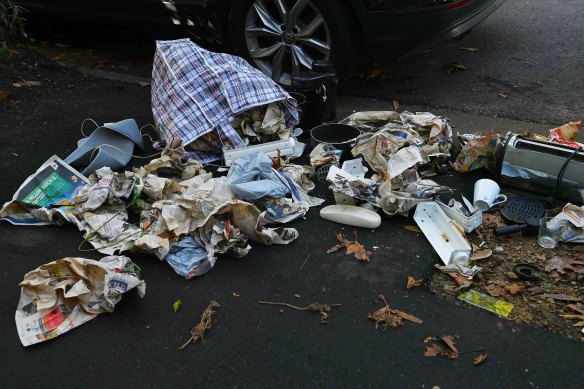 Rubbish dumped in Darlinghurst, Sydney, in May. Credit:Kate Geraghty

In NSW, ratepayers have lodged more than 17,000 complaints about bad parking, making it the most common gripe in the state followed by dumped rubbish (15,201 reports) and abandoned trolleys (11,934 reports).

Parking was the second most frequently reported issue in Victoria, where more than 20,000 complaints have been lodged so far. Reports of graffiti and vandalism have surged in Melbourne since the onset of the pandemic, with Victorians contributing a third of the 36,000 reports lodged nationwide.

Queensland and Tasmania share NSW’s dislike for bad parking, while South Australia and the ACT complained the most about abandoned trolleys.

In the Northern Territory, the most common complaint was overgrown vegetation and trees.

The reports are submitted through the Snap Send Solve app, which allows users to send photos of an issue directly to the relevant council or authority.

Most common gripes by Australian state

Michele Hackney often finds rubbish dumped near trails on her frequent walks in the bushland around her home in Killarney Heights, in Sydney’s north.

“I’m not looking for the mess. But if it’s there, then I’ll just do something about it.” she said.

“I don’t like it when it’s messy out there. I’m a typical mother, tidying up after people.”

She said her local Northern Beaches Council was generally quick to respond when she sent photos ranging from vandalised bus stops to the potholes caused by the record downpours and flooding that hit the city in the first half of 2022.

“They were attended to pretty quickly by the council, so I was really happy with that,” she said.

“If you, as a member of the public, don’t take that photo, they aren’t alerted to it, so nothing can get done.” 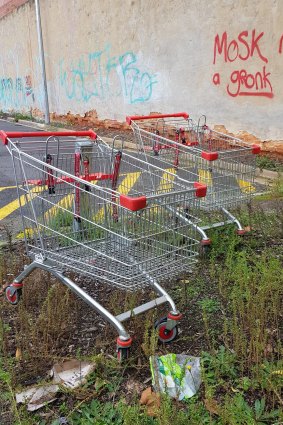 Graffiti and abandoned trolleys are among the most common complaints lodged by Australians so far in 2022.

The top three gripes for Sydney’s northern suburbs were parking, council facilities and parks, and rubbish.

Support worker Eve Lewis, who lives in Richmond in Sydney’s west, used to send so many emails to her local supermarkets complaining about abandoned shopping trolleys that they gave her the phone number of the person responsible for collecting them.

Since her husband introduced her to the app four years ago, she now reports abandoned trolleys along her regular walking route, a habit that attracts mixed reactions from family and friends.

“It’s like trolley avenue sometimes … [it’s as if] they breed overnight,” she said.

“My adult children are quite embarrassed every time I stop and take a photograph of a trolley, but I don’t care – the grandkids love it.

“I can think of worse things than taking photos of a trolley.”

Lewis said she was excited to do her bit to help remove the supermarket trolleys that are quick to appear in her neighbourhood.

“I’m in my element, you know, trotting down the streets taking photos of trolleys, cars that have just been left with a sticker on from the council,” she said.

“Can you imagine what I’m going to be like when I’m out and about next week?”