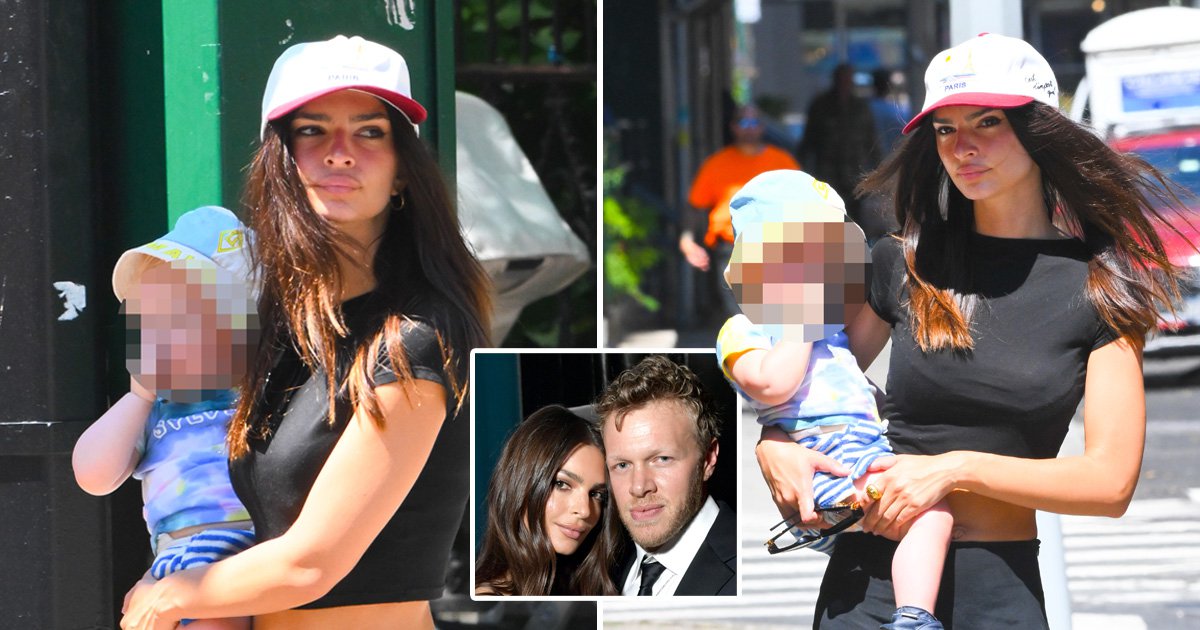 Emily Ratajkowski has been spotted out with her baby son amid reports the star is set to divorce her husband Sebastian Bear-McClard.

Speculation emerged this week that the model, 31, and film producer, 41, would be getting divorced amid infidelity rumours.

Unverified split rumours began last week when Emily was seen without her wedding ring, and a source later claimed to Page Six that Sebastian was ‘a serial cheater.’

The couple have been married for four years, and are parents to a one-year-old son, Sylvester Apollo Bear.

Now Gone Girl star Emily has been seen out with her son in New York City, and again has seemingly foregone wearing her wedding ring.

In snaps taken this week, Emily was spotted enjoying the sunshine in the Big Apple as she strolled down the brightly lit streets carrying her son on her hip.

The star dressed comfortably in a black crop top and short skirt, along with a baseball cap to keep the sun out of her eyes.

Casual as she was, Emily looked gorgeous, her brunette locks hanging loose past her shoulders.

Her son Sylvester, meanwhile, was protected from the sun in a sweet blue hat, along with summery shorts and a t-shirt bearing his name.

Recently, Emily has been seen without her wedding ring, including in a TikTok video and out walking her dog.

On this trip, the star could be seen with a ring, but from the angle of the photographs, it didn’t look like the enormous 5-carat rock placed on her finger in 2018.

While Emily has not been spotted with her wedding ring in recent days, Sebastian reportedly still had his wedding band on when he was seen sitting on a bench outside Cafe Cluny in New York City on Wednesday.

The model happily marked her and Sebastian’s four-year anniversary back in March with a public post on Instagram, but notably did not publicly mark Father’s Day, which landed in June this year.

Emily and Sebastian were last seen out together in mid-June, while on holiday together in Italy where they appeared to be in good spirits.

They went public with their relationship in February 2018, after being in the same friend group for a number of years, and tied the knot just two weeks later surrounded by a small group of close friends and family.

Metro.co.uk has reached out to reps for Emily and Sebastian for comment.