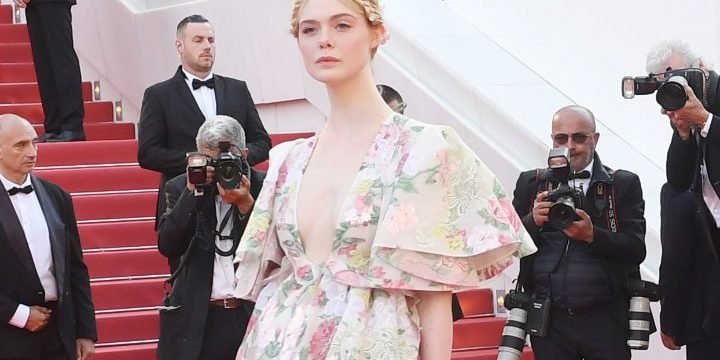 The ‘Maleficent: Mistress of Evil’ star assures her fans and Instagram followers that she is fine after collapsing at the Cannes Film Festival Chopard Trophee dinner on Monday.

AceShowbiz –Elle Fanning is “all good” after having a health scare at the Cannes Film Festival Chopard Trophee dinner. The 21-year-old Cannes juror fainted during the dinner party on Monday night, May 20, but she has taken to Instagram hours later to assure everyone that she is okay despite the incident.

Giving an update on her condition, the “We Bought a Zoo” star posted a selfie in what looks like a dressing room. Ditching her makeup and pulling her hair up in a simple knot, she gave a thumbs up and smiled to the camera. She made light of her faint, writing in the caption, “Oops, had a fainting spell tonight in my 1950’s Prada prom dress but it’s all good!! #dresstootight #timeofthemonth.”

It’s not clear what caused Elle to faint at the dinner function. The star of “The Beguiled” and “Maleficent” collapsed and fell off her chair when actor Francois Civil had just been welcomed onstage by Cannes director Thierry Fremaux.

Fortunately for Elle, her sister Dakota Fanning was sitting at a table next to her and quickly helped her to her feet before security whisked them out of the room. Colin Firth, who was seated close Elle, also rushed over to offer his assistance.

Marion Cotillard appeared to be in shock as well, placing a hand over her heart as Elle was taken away by security. According to eyewitness, the ceremony was briefly paused as the crowd went silent.

Elle was stunning in a strapless cream-colored dress with a fitted bodice that perfectly hugged her slim waist at the event. She accessorized with a choker and matching bracelet, as she wore minimal makeup with a coral lipstick. Her blonde hair was styled in half updo.

The “Super 8” star has been in France for the 72nd edition of the film festival that runs from May 14 until May 25. She is among the jury members along with French graphic novelist Enki Bilal and the Oscar-nominated director of “The Favourite“, Yorgos Lanthimos. Mexican director Alejandro Gonzalez Inarritu will preside over the panel that decides on prizes, including the top Palme D’Or award.