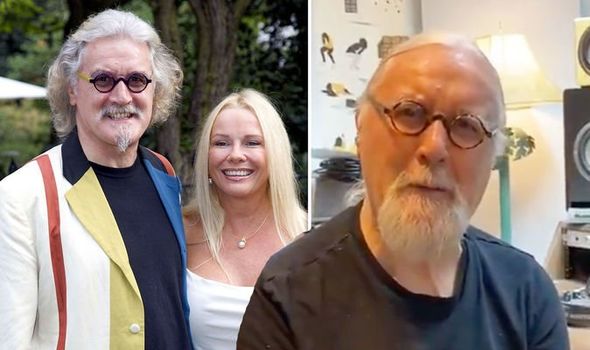 Billy Connolly is now happily married to his long-term wife Pamela Stephenson, 71, but his love life hasn’t always been plain sailing. The comedian claimed that being the “funny guy” got in his way when it came to wanting to date.

Recording for the audio version of his new book Windswept and Interesting, the 78-year-old told fans his wife Pamela is a “sexologist”.

Questioning her job, he said it was a “rather limiting subject” and joked: “How can you study something that only lasts seven seconds?”

He went on to say: “I’ve always had a problem with sex, not so much with sex itself, more the beginning bit.

“I was never really good at chatting people up.

“I don’t know if I was lousy at it and saying the wrong things or being too funny or silly.

“I could never read the signs or tell whether or not it was working.”

Billy added his friends used to have to tell him when someone was “mad” about him.

“Being a funny guy got in my way, women would laugh and laugh all night,” he continued as the video teaser ended.

Pamela shared the video of her spouse recording his book on Twitter.

Many of her fans reacted to the clip.

One commented: “Whatever Billy touches it turns to gold.”

A third cheekily asked: “What chat up line did he use with you?”

A fifth wrote: “Can’t wait for this @PamelaStephensn – I see the big fella is in good form!”

Moving on from his previous dating doubts, Billy tied the knot with Pamela in 1989.

The couple share three children together; Amy, Scarlett and Daisy.

Ahead of this, he was married to Iris Pressagh for 16 years.

The former couple have two children together; Cara and Jamie.