London: Liz Truss, a virtual political unknown in Britain for much of the past decade, has set out her top three priorities for government, promising the nation could “ride out the storm” during a rain-sodden first address as prime minister.

In a speech from Downing Street, Truss named tax cuts, support during the energy crisis and tackling the massive backlog in public hospitals as priorities as she prepared for a whirlwind 24 hours in which she will name a new cabinet, speak to international counterparts and set about tackling a worsening economic crisis. 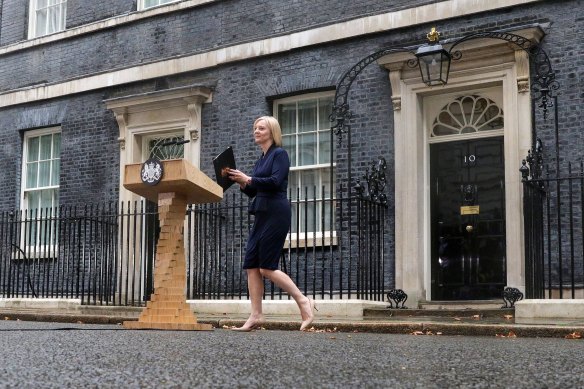 Having met the Queen at Balmoral Castle in Scotland on Tuesday for the transfer of power from Boris Johnson, the arrival back in London of Britain’s third female prime minister was delayed due to fierce rain and storms sweeping across the south of England. Hundreds of supporters and colleagues were soaked to the bone outside Downing Street as they waited for her to arrive.

“I will cut taxes to reward hard work and boost business-led growth and investment,” Truss said, as she dodged torrential downpours outside the famous black door of No.10.

“We will get spades in the ground to make sure people are not facing unaffordable energy bills and we will also make sure that we are building hospitals, schools, roads and broadband.”

She promised to “put our health service on a firm footing”, pledging to “make sure that people can get doctor’s appointments and the NHS services they need”.

The self-proclaimed small-state Conservative is drawing up a two-year energy relief package that could top £100 billion. It is intended to shield households and businesses from soaring bills.

The pound rose 0.8 per cent against the dollar to $US1.16 on Tuesday, having just a day earlier hovered near its weakest point in decades at $US1.1444. Sterling has not traded at such weak levels on a regular basis since the mid-1980s.

She acknowledged that the UK was facing severe “global headwinds” that she said had been caused by Russian President Vladimir Putin’s invasion of Ukraine, alongside the aftermath of the coronavirus pandemic. However, Truss said that she remained confident that the country could survive and thrive despite the challenges.

“We shouldn’t be daunted by the challenges we face,” she said. “As strong as this storm may be, I know that the British people are stronger. Our country was built by people who get things done.

“We have huge reserves of talents of energy and determination I am confident that together we can ride out the storm. We can rebuild our economy, and we can become the modern, brilliant Britain that I know we can be.”

Truss is expected to link the energy package to long-term market reforms and a commitment to increase oil and gas production, along with fracking for shale gas if local communities approve.

For the first time in history, there will not be a white man in one of the four great offices of state.

Truss, who beat Rishi Sunak in the Conservative leadership contest, has appointed James Cleverly as foreign secretary and Kwasi Kwarteng as her chancellor. Suella Braverman is likely to be appointed home secretary.

Kwarteng, whose parents emigrated from Ghana as students in the 1960s, is the UK’s first black chancellor, while Cleverly’s mother came from Sierra Leone. Braverman’s mother was born in Mauritius and her father moved to Britain from Kenya.

The three are among only 11 black or Asian MPs to have attended the cabinet. It was not until 2014 that Sajid Javid became the first non-white Conservative MP to join the cabinet.

Earlier, Johnson made a defiant farewell speech, claiming he had delivered Brexit, a successful COVID-19 vaccine rollout and a series of infrastructure projects — although few have actually been built.

He offered no apologies for his role in a series of scandals, including ‘Partygate’ during pandemic lockdowns, which led to his downfall following a mass mutiny among his ministerial colleagues.

He dropped a classical hint that he might yet make a comeback.

“Like Cincinnatus, I am returning to my plough and will be offering this government nothing but the most fervent support,” he said. Historians pointed out that Cincinnatus later returned to Rome as ruler.

He and his wife, Carrie, later spent almost 40 minutes with the Queen, as she accepted his resignation.

Buckingham Palace said: “The Right Honourable Boris Johnson MP had an audience of the Queen this morning and tendered his resignation as prime minister and first lord of the Treasury, which Her Majesty was graciously pleased to accept.”