A two-year-old girl who was pulled unresponsive from a pond at a park in Melbourne’s inner west on Monday evening has died in hospital.

Emergency services were called to Footscray Park at Maribyrnong Boulevard about 8pm on Monday following reports the toddler was found in the water, about 20 metres behind a gated playground. 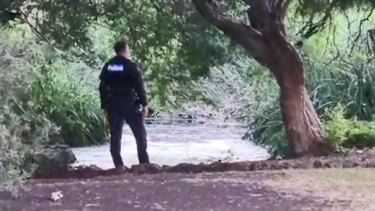 Police at the scene after the toddler was found unresponsive in a pond at Footscray Park. Credit:Nine News

Paramedics treated the girl at the scene before she was taken to the Royal Children’s Hospital in a critical condition. She died in hospital on Thursday afternoon and police are preparing a report for the coroner.

Professor Warwick Teague, the Royal Children’s Hospital director of trauma services, said the toddler was away from her parents for only minutes before she was found face down in the water.

Maribyrnong Council erected temporary fencing around the pond after the incident.

Another three-year-old girl died in hospital in July this year, five days after she was found unresponsive in the Footscray Park pond south of the main adventure playground on June 30.

Victoria Police appealed in November for witnesses to the drowning to come forward.

Footscray Park is a popular picnic and play spot for families and is located on the south bank of the Maribyrnong River.

Professor Teague said the two-year-old was one of several children treated in hospital over the past week as a result of water-related incidents, including one who was injured in a boat engine explosion, and another who was run over by a boat and sustained “significant propeller injuries”.

“[On Thursday] a seven-year-old child was swimming in a backyard pool and drowned after a period of approximately 30 seconds underwater,” Professor Teague said.

“It’s important to recognise that this child was an able swimmer; this child had attended swimming lessons and was being supervised by an adult at the time of the incident.

“They were attended to by a bystander who commenced effective CPR as early as possible and has these kind of qualifications which are important because they resonate with the advice that we and others bring consistently to help our community make positive steps in preventing these very injuries.”

Authorities have urged people to stay vigilant around waterways over the festive and summer season, with the risk of child drownings at a critical high.

Emergency Management Commissioner Andrew Crisp said there had been a number of tragedies in the water over the past week.

“[On] Christmas Day, we had a drowning death; we had a toddler in a lake out at the western suburbs; Eastern Beach, another possible drowning death a couple of days ago, [and we’re] still looking for a woman down at San Remo who has washed off rocks,” he told ABC radio Melbourne on Friday morning.

“We had 61 drowning deaths this financial year. We just cannot afford to again be complacent in and around water. It does kill.”

Late on Friday morning, police said a woman’s body had been found in waters in nearby Half Moon Bay, after she was swept from rocks at San Remo while fishing with family on Thursday. Her death is not being treated as suspicious.

Life Saving Victoria said there had been five fatal drownings across Victoria between December 1 and December 30. Three of those were in inland waterways.