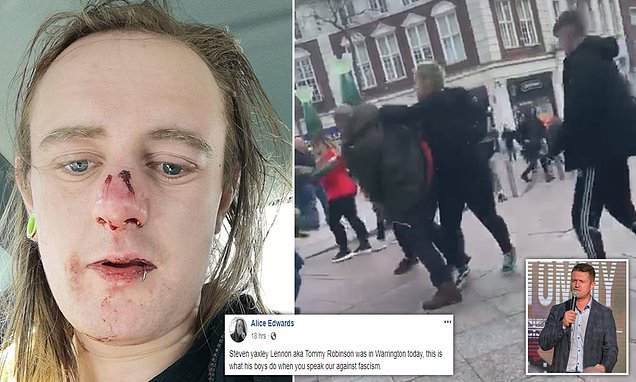 An anti-racism activist says she was punched by supporters of Tommy Robinson during ugly scenes on his campaign trail yesterday.

Fights broke out around Robinson as he took his bid to become a Euro MEP to Warrington.

Alice Edwards says she was set upon by three of Robinson’s supporters, who were seen in footage brawling in the Cheshire town centre yesterday.

She says she suffered a broken nose in the violence, which came shortly after Robinson had a McDonald’s milkshake thrown over him. 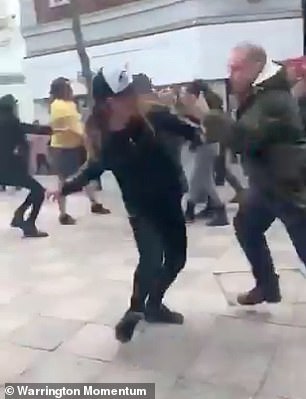 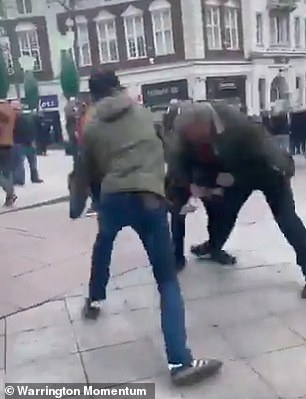 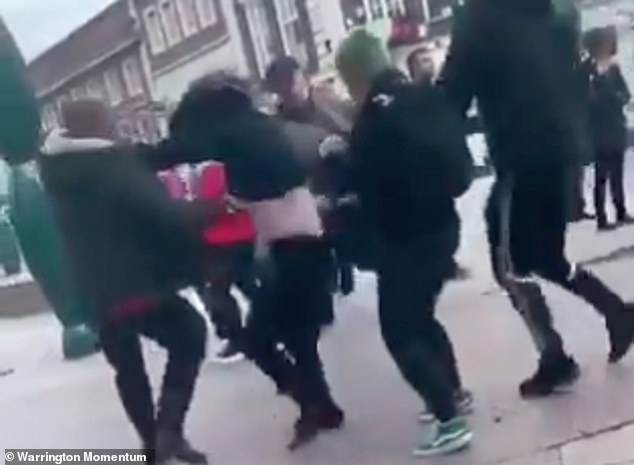 Footage taken earlier on in the day in Warrington town centre appears to show another fight break out among a group of men. 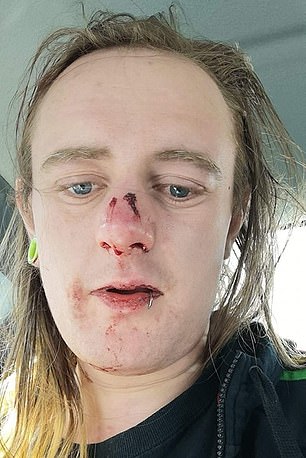 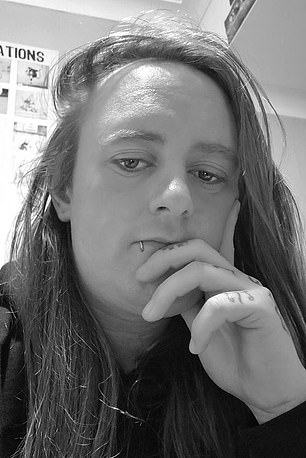 Ms Edwards, pictured (left) after the violence and (right) before, says she suffered a broken nose

Ms Edwards said she and her friends had planned to hold a demonstration against Robinson before the fighting.

She claims one of her friends was pushed and she was attacked as she tried to step in.

She told the Daily Mirror: ‘I got punched in the side of the head and stumbled away, and turned round and I had another one of Tommy’s hooligans running at me, swinging his arms at me.’

She said she suffered a broken nose, broken finger and a cut to her head.

Robinson’s supporters have written online that a friend of Ms Edwards attacked them first.

In footage separate footage taken at the scene, Robinson – who is running as an independent to become an MEP for the North West – was seen talking to an Asian man in the town centre.

He can be heard telling the man that he was ‘overly aggressive’ and that ‘the only person you pushed was a woman.’

But just moments later, the 36-year-old is covered in milkshake before hurling several punches at the man responsible. 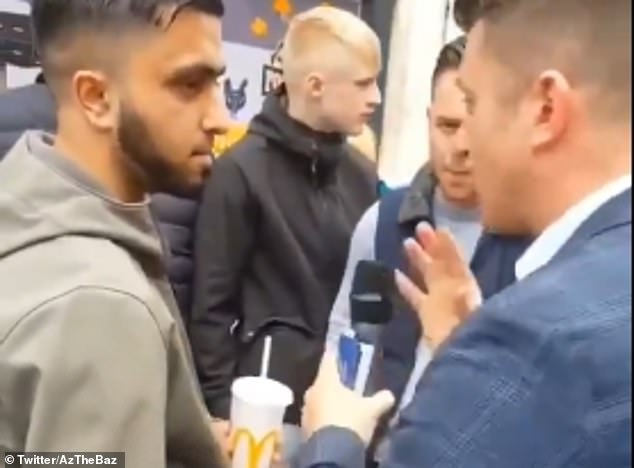 In footage taken at the scene, Robinson – who is running as an independent to become an MEP for the North West – can be seen engaged in a discussion with an Asian man and appears to be referencing an earlier altercation in the town centre 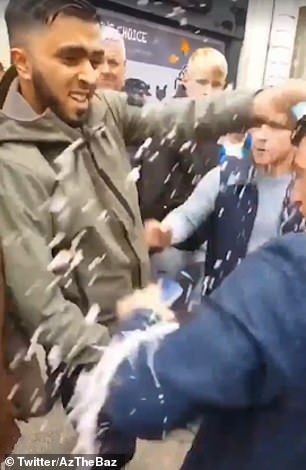 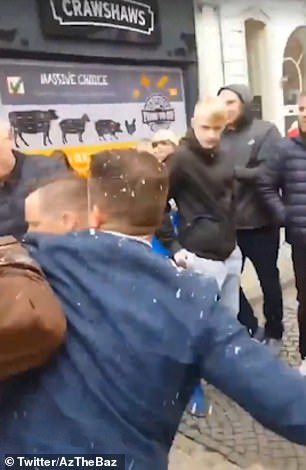 The encounter took place as the far-right extremist was campaigning in Warrington, Cheshire, and left his blue striped suit covered in the sticky McDonald’s drink (left). In footage taken at the scene, Robinson hurls punches after having the fluid thrown over him (right)

The man later spoke to Asian Image, saying: ‘He just kept talking to me. I kept moving location. I was the only Asian guy there.

‘I said to him I do not wish to speak to you on or off camera. I just got annoyed with him. A milkshake ‘slipped’ out of my hand.’

Cheshire Police said: ‘We are aware of an allegation of assault made following an incident in Bridge Street in Warrington this afternoon. We are looking into the circumstances.’

A spokeswoman said the force had given Robinson advice but denied claims on social media that he had been given a police escort.

Footage taken earlier on in the day in Warrington town centre appears to show another fight break out among a group of men. The footage, posted on social media, shows terrified locals running away as the violence erupts.

The incident appears to have taken place just off Bridge Street, where the milkshake hurling occurred. The area is enclosed and connects several other streets in the town centre. 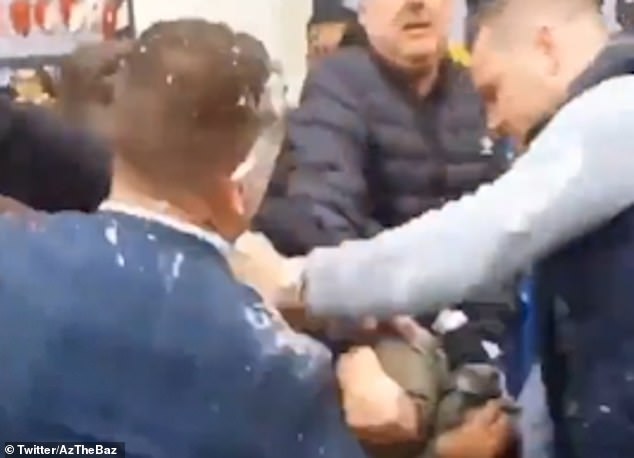 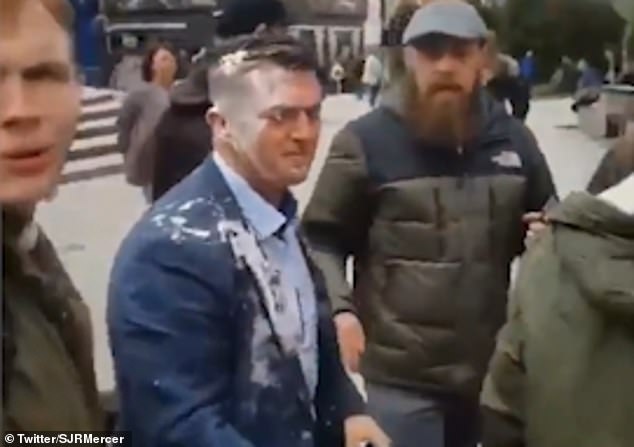 Robinson is left covered in strawberry milkshake following the altercation. It covered his face and upper body

Several of those commenting on the footage have alleged members of Robinson’s crew were involved, and it may have been the incident referenced in the milkshake footage.

Elsewhere on social media, video footage has been posted alleging Robinson was given a police escort out of the city centre. But police have denied these claims.

It comes after the EDL founder was also covered in strawberry milkshake while out canvassing for votes for the European Parliament elections in Bury on Wednesday.

Robinson, who is also known as Steven Yaxley-Lennon, is running for the European Parliament as an independent candidate for the North West of England.

The far right activist claimed ‘some Muslim supporter’ was behind the incident involving an unidentified assailant. Footage of the attack was widely shared online. 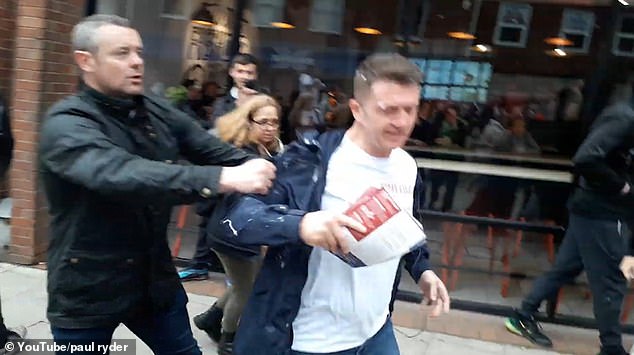 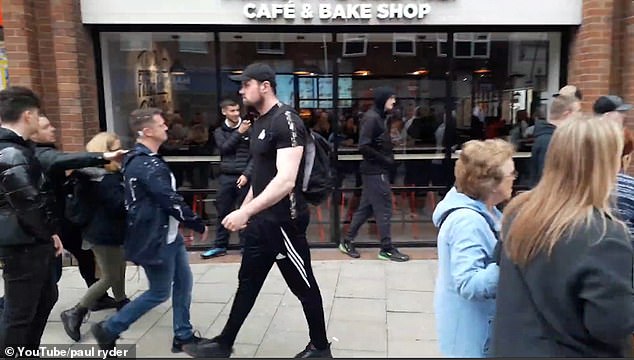 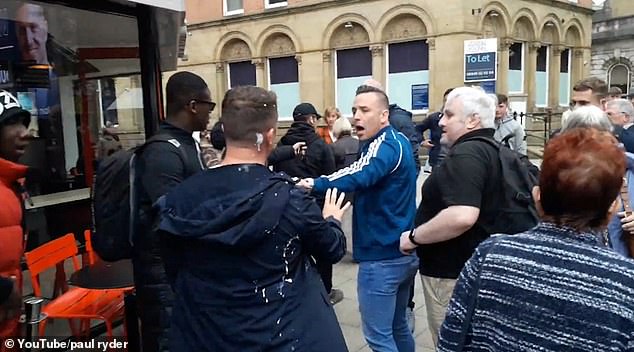 Earlier, a woman in Salford was caught on camera confronting Yaxley-Lennon on the street while canvassing.

In the footage, which has received hundreds of thousands of views after being re-uploaded on Twitter, Robinson talks to the woman about ‘Muslim grooming gangs’.

The woman, whose identity is not known, then responds asking if the former English Defence League leader is ‘just spouting a load of s***’ to get publicity.

Matthew Gaskell, who filmed the video outside a Salford shopping centre on Tuesday, told the Press Association the woman had also asked Robinson ‘why he was focusing on Muslims’. 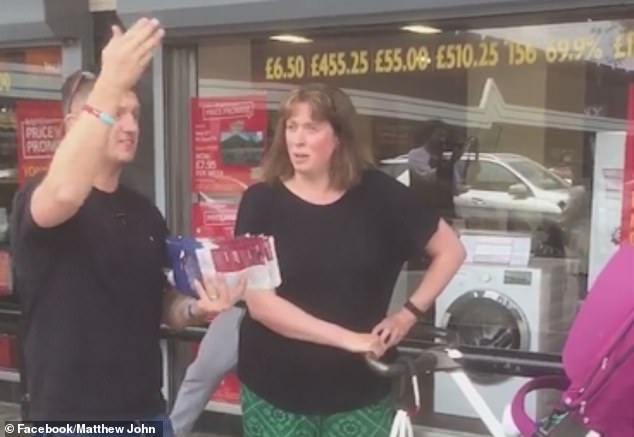 Yesterday, Robinson faced heavy criticism from a woman in Salford while he was again out canvassing for votes to become an MEP representing North East England

She could also be heard accusing Robinson, 36, of ‘perverting the course of justice’, an apparent reference to his ongoing contempt of court case.

Robinson is accused of committing contempt by filming people in a criminal trial and broadcasting the footage on social media.

The Attorney General Geoffrey Cox QC announced it was in the public interest to pursue proceedings, after a previous contempt finding against Robinson was quashed by the Court of Appeal in August.

Robinson pledged a ‘David versus Goliath’ battle to represent the ‘betrayed’ working classes as he announced his plans to run as an MEP last Thursday.

He will remain an adviser to Ukip leader Gerard Batten but was unable to run for the party due to its rule banning former EDL members from joining.