A 17-year-old boy has been charged with murder over the death of teenager Jason Langhans, who tried to stop a fight at a 16th birthday party.

The teenager, from the Geelong suburb of Bell Post Hill, was expected to face a children’s court on Wednesday afternoon. 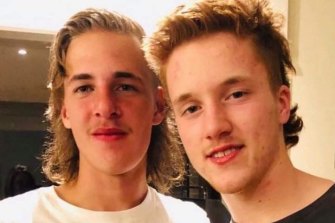 Two other men were released without charge.

Police believe Jason, who was also 17, was trying to stop an argument that erupted at the house party in Tooradin, on Melbourne’s south-east fringe, about 2.30am on March 21.

Jason stepped in after three gatecrashers were asked to leave and was allegedly hit twice to the head by a long, sharp object.

He was then punched by a second gatecrasher before the trio allegedly fled.

The teenager died in hospital on April 10.

He had just signed up for an apprenticeship with a plumbing company and had recently bought a four-wheel-drive vehicle.

In an emotional appeal for information after Jason died in hospital, his mother Carolyn had said her son was planning on getting his driver’s licence when he turned 18 in July so he and his friends could go driving in Dargo.

“That’s all gone now, it’s all been taken away,” she said. “It’s been horrible, every day at The Alfred [hospital], just wishing that he would open his eyes and talk to us, and just nothing. Which is heartbreaking. We are lost. There is a big hole in our hearts.”