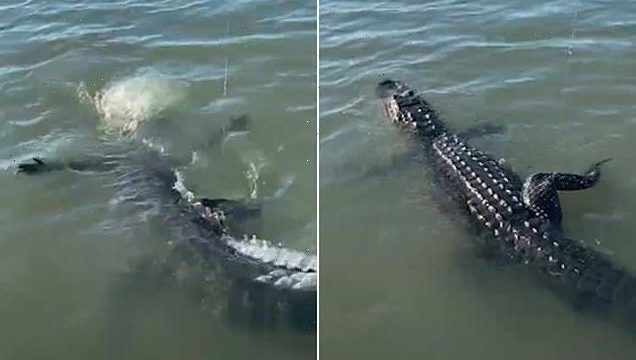 This is the jaw-dropping moment a South Carolina fisherman realizes he has hooked an alligator while out fishing in a saltwater marsh in Murrells Inlet.

Footage recorded by Rob Birchmeier captures him saying ‘I think I got me a stingray’ moments before the killer reptile emerges from the murky waters.

The kayak angler, from Pawleys Island, shouts ‘Oh boy, that’s not a stingray…surprise, surprise!’ before the 8ft beast begins thrashing in the water.

It then attempts to dive back below the surface while still attached to the fishing line.

The 48-second clip, recorded on May 20, ends with the alligator floating just beneath the surface, with Birchmeier’s jig still hooked into its back left leg.

‘Does anybody wanna help me get my jig back?’ he can be heard saying.

Birchmeier said he has made over 500 trips in the area and that not much shocks him anymore.

He told Myrtle Beach Online: ‘I was as surprised as I could be when that came up.

‘It could have been a mermaid and I wouldn’t have been more surprised.’ 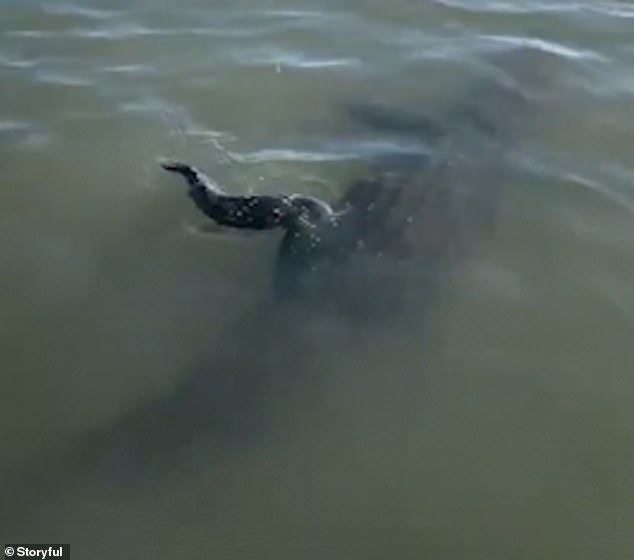 ‘That’s not a stingray’: Alligator begins to emerge from murky depths of saltwater to the surprise of fisherman Rob Birchmeier 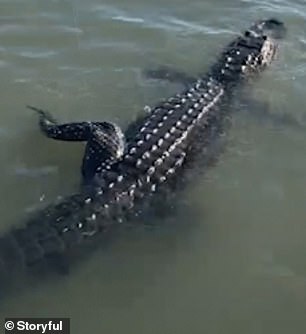 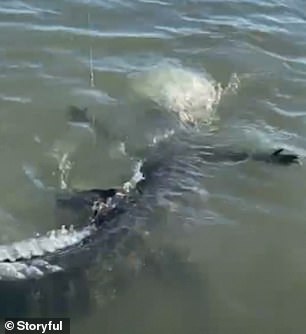 ‘Surprise, surprise!’: Robert Birchmeier thought he had caught a stingray before an alligator of up to 8ft in length came to the surface in a saltwater in South Carolina

The alligator eventually unhooked itself and swam off and Birchmeier was able to get his fishing jig back.

Birchmeier, a kayak tour guide and owner of Pawley’s Island Beach to Creek, said the experience won’t dissuade him from fishing from the kayak.

‘I tell people they have more to worry about from sunburn, oyster shells and fire ants,’ he added.

Murrells Inlet sits on the eastern coast and has long been a fishing mecca.

It is one of the very few coastal areas with a system of marshes and backwaters which are 100% saltwater.

There is no fresh water pumping into the area and reducing the salinity, making it ideal for fish species like trout, redfish and the doormat flounder.

While alligators typically prefer freshwater, they are often seen hunting in salt water in the US, including South Carolina.

They are known to put up with the saltier conditions for a chance to feast on the likes of stingray and crab.

Alligators do not possess salt glands, meaning they risk stress and death by staying in saltwater for too long, hence they tend to travel back and forth.