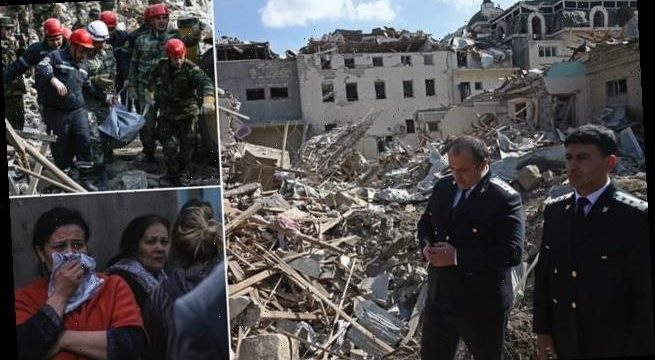 Hopes that a Russian-brokered ceasefire between Armenia and Azerbaijan might hold were further dashed Sunday, with both sides accusing the other of intense shelling on civilian areas and escalating two weeks of fierce clashes.

Azerbaijan’s foreign ministry said that overnight shelling by Armenian forces on the country’s second largest city, Ganja, had left seven people dead and 33 wounded including children, less than 24 hours after the halt to fighting was supposed to take effect.

Rescuers in red helmets dug through piles of debris with their bare hands in search of signs of survivors, an AFP journalist in the city reported. 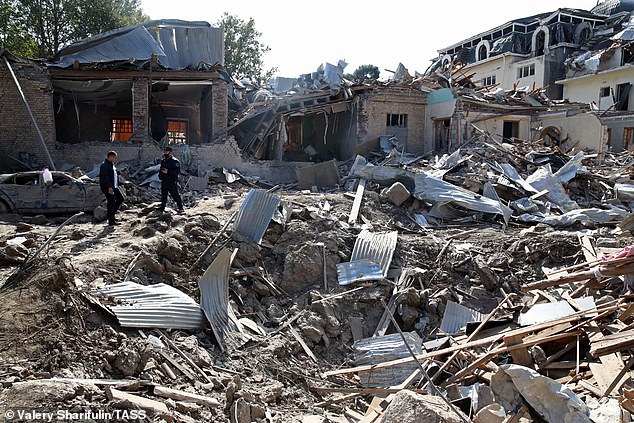 Residential buildings destroyed by a military strike pictured in Gyandzha, Azerbaijan on October 11 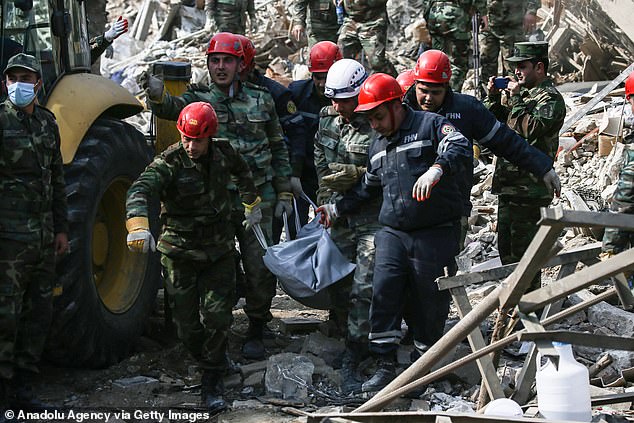 Search and rescue team members carry a dead body as operations continue among debris of houses after Armenian army’s alleged attacks with long-range missiles, on October 11, 2020 in Ganja city, Azerbaijan 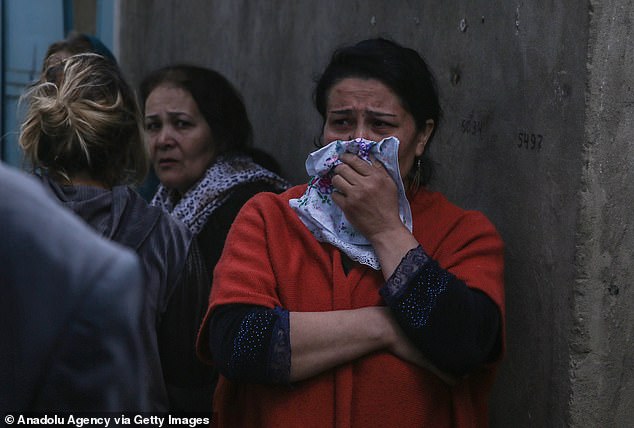 Azerbaijani women mourn as search and rescue operations continue among debris of houses after Armenian army’s alleged attacks with long-range missiles, on October 11

They retrieved one nearly naked body and gingerly put it in a white bag to be taken away in an ambulance while several horrified residents watched on and wept.

One witness said they were woken by a huge blast that levelled an entire square block of one- and two-floor houses in the early hours of the morning, leaving nine apartments destroyed.

‘Everything I’ve worked for my entire life has been destroyed,’ said resident Zagit Aliyev, 68.

The agreement to pause hostilities in order to exchange prisoners and the bodies of people killed after two weeks of fighting over the disputed Nagorno-Karabakh region was approved by Armenian and Azerbaijani foreign ministers in marathon Russia-brokered talks in Moscow. 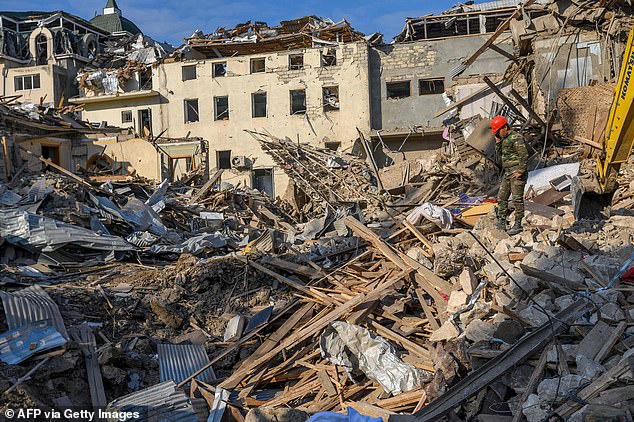 Rescuers search for victims or survivors at the blast site hit by a rocket during the fighting between Armenia and Azerbaijan over the breakaway region of Nagorno-Karabakh, in the city of Ganja on Sunday 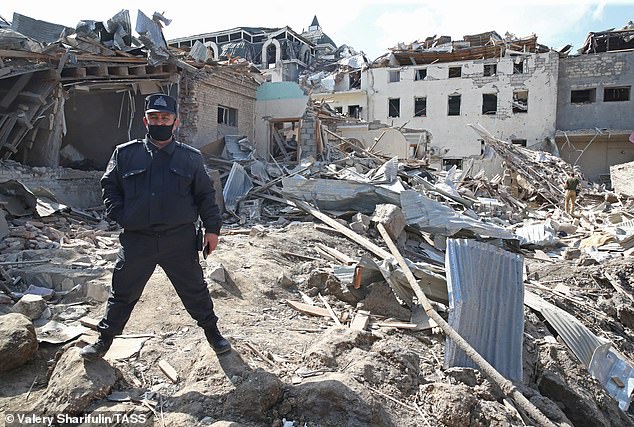 A serviceman stands among residential buildings destroyed by a military strike in Gyandha, Azerbaijan

The truce officially entered into force at noon on Saturday but both sides almost immediately accused each other of violations.

On Sunday, the defence ministry in the breakaway region insisted Armenian forces were respecting the humanitarian ceasefire and in turn accused Azerbaijan of shelling civilian-populated areas.

Claims that Armenian forces were responsible for shelling Ganja were ‘an absolute lie,’ it added.

The leader of the disputed Nagorno-Karabakh region, Arayik Harutyunyan, described the situation as ‘calmer’ on Sunday, but warned that the truce was precarious.

An AFP journalist in the administrative capital of Stepanakert, which has been subjected to heavy bombings since the fighting erupted and is pockmarked with deep craters and unexploded ordnance, reported hearing loud explosions throughout the night.

Vahram Poghosyan, a spokesman for Karabakh’s leader, said the overnight shelling on Stepanakert was ‘a disrespect of the agreements reached in Moscow,’ and called on the international community to recognise the province’s independence as a way to end the fighting. 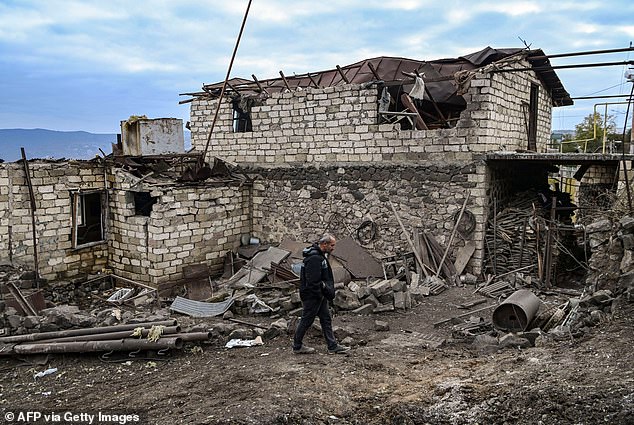 Ashot Aghajanian, 54, walks in the yard of his house, which is said was destroyed by last night Azeri shelling, in the city of Stepanakert on October 11

New fighting broke out late last month, stemming from a long-simmering disagreement between Armenia and Azerbaijan over Karabakh.

The disputed territory is an ethnic Armenian enclave in Azerbaijan, home to about 150,000 people, which broke from Azerbaijan’s control in a war in the 1990s that killed some 30,000 people.

Its separatist government is strongly backed by Armenia, which like Azerbaijan gained independence with the 1991 collapse of the Soviet Union.

The most recent bout of fighting has been the heaviest since the 1990s war, with more than 450 people reported dead, thousands forced to flee their homes and fears the fighting could escalate into a devastating all-out conflict.

The return of fighting has stoked fears of a full-blown war embroiling Turkey, which strongly backs Azerbaijan, and Russia, which has a military treaty with Armenia.

Armenia and world leaders including Russian leader Vladimir Putin and French President Emmanuel Macron have denounced the deployment of pro-Turkish fighters from Syria and Libya to bolster Azerbaijan’s army.

France, Russia and the US – known as the ‘Minsk Group’ – have for decades sought a lasting solution to the Karabakh conflict, but have failed to stop sporadic outbreaks of fighting, and Baku with Turkey’s backing appears set on continuing with its military intervention.

A senior Azerbaijani official said Saturday the truce was only meant to be ‘temporary,’ and said Baku had ‘no intention to backtrack’ on its effort to retake control of Karabakh.