The state media report came a day after the militaries of the United States, South Korea and Japan said they detected North Korea firing a suspected ballistic missile into its eastern sea.

The Korean Central News Agency said Tuesday’s launch involved a hypersonic glide vehicle, which after its release from the rocket booster demonstrated “glide jump flight” and “corkscrew maneuvering” before hitting a sea target 1,000 kilometers (621 miles) away. Photos released by the agency showed a missile mounted with a pointed cone-shaped payload soaring into the sky while leaving a trail of orange flames and Kim watching from a small cabin with top officials, including his sister Kim Yo Jong.

The launch was North Korea’s second test of its purported hypersonic missile in a week, a type of weaponry it first tested in September, as Kim Jong Un continues a defiant push to expand his nuclear weapons capabilities in the face of international sanctions, pandemic-related difficulties and deadlocked diplomacy with the United States.

The North has been ramping up its testing activity since last fall, demonstrating various missiles and delivery systems apparently designed to overwhelm missile defense systems in the region. Experts say Kim is trying to apply more pressure on rivals Washington and Seoul to accept it as a nuclear power in hopes of winning relief from economic sanctions.

It was the first time since March 2020 that North Korean state media reported Kim’s attendance at a missile test.

The KCNA said Kim praised his military scientists and officials involved in developing the hypersonic missile system, which he described as the most significant part of a new five-year plan announced in early 2021 to build up the North’s military force.

The North has described the new missile as part of its “strategic” weaponry, implying that the system is being developed to deliver nuclear weapons.

“The superior maneuverability of the hypersonic glide vehicle was more strikingly verified through the final test-fire,” KCNA said. It said Kim stressed the need to speed up the expansion of the country’s “strategic military muscle both in quality and quantity and further modernize the army” and vowed further success in “remarkably increasing the war deterrent of the country.”

Hypersonic weapons, which fly at speeds in excess of Mach 5, or five times the speed of sound, could pose a crucial challenge to missile defense systems because of their speed and maneuverability. Such weapons were on a wish-list of sophisticated military assets Kim unveiled last year along with multi-warhead missiles, spy satellites, solid-fuel long-range missiles and submarine-launched nuclear missiles. 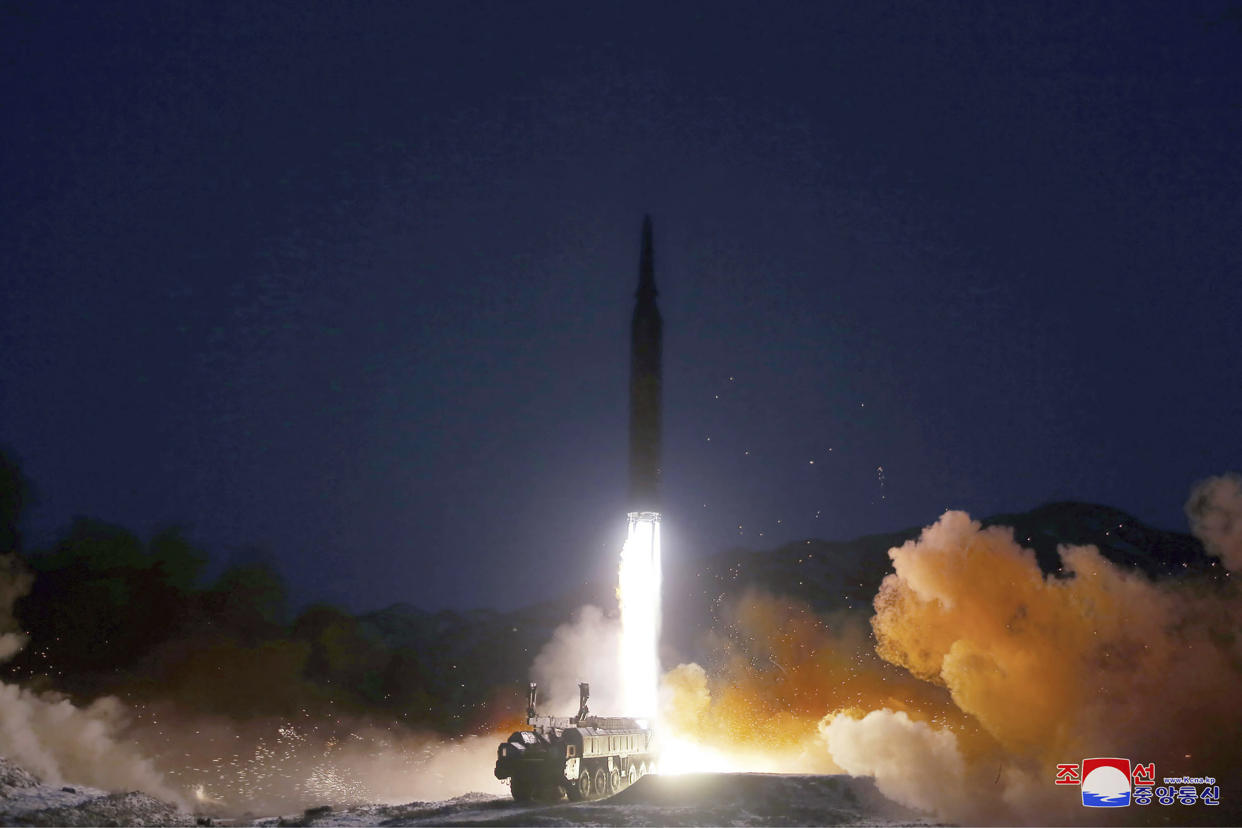 “North Korea seems to believe that hypersonic weapons are game changers and provide entrance into the nuclear club when the U.S., Russia, and China have been racing to build them,” said Duyeon Kim, a senior analyst at Washington’s Center for a New American Security.

She said the North’s recent advancements in its missile program indicate an aim to secure a “second-strike nuclear capability, make its missiles modern and more survivable, reassure the North Korean people of its military might and credibly gain entrance into the nuclear club.”

The U.S. Indo-Pacific Command said the launch highlighted the “destabilizing impact of (North Korea’s) illicit weapons program” but didn’t pose an immediate threat to U.S. territory or its allies.

Minutes after Tuesday’s launch, airports across the western United States halted flights for a short time without explanation. A spokeswoman for San Diego International Airport referred questions to the Federal Aviation Administration.

The FAA acknowledged the “ground stop” in a tweet, without offering a reason why it issued the order.

“Full operations resumed in less than 15 minutes,” the FAA said. “The FAA regularly takes precautionary measures. We are reviewing the process around this ground stop as we do after all such events.”

South Korea’s Joint Chiefs of Staff had said the North Korean missile flew 700 kilometers (434 miles) at a maximum speed of around Mach 10 before landing in waters off the North’s eastern coast.

Japanese Defense Minister Nobuo Kishi described the new missile as hypersonic and said the North’s efforts to advance its missile capabilities posed a serious threat to Japan. He said Japan will consider all options, including the possibility of pursuing pre-emptive strike capabilities, to strengthen its defense.

Kim Jong Un entered the new year renewing his vow to bolster his military forces, even as the nation grapples with pandemic-related difficulties that have further strained its economy, which is crippled by U.S.-led sanctions over its nuclear program.

The economic setbacks have left Kim with little to show for his diplomacy with former U.S. President Donald Trump, which derailed after their second meeting in 2019 when the Americans rejected North Korea’s demand for major sanctions relief in exchange for a partial surrender of its nuclear capabilities.

The Biden administration, whose policies have reflected a broader shift in U.S. focus from counterterrorism and so-called rogue states like North Korea and Iran to confronting China, has said it’s willing to resume talks with North Korea at any time without preconditions.

But North Korea has so far rejected the idea of open-ended talks, saying the U.S. must first withdraw its “hostile policy,” a term Pyongyang mainly uses to describe the sanctions and joint U.S.-South Korea military drills.