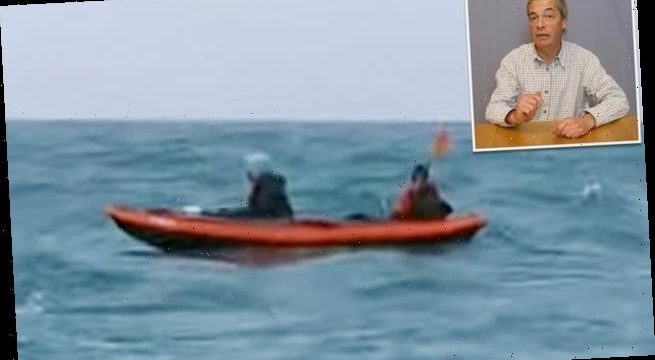 Nigel Farage claims he saved the lives of two migrants who had been adrift in the English Channel for 18 hours after spotting their blow-up kayak while on a fishing trip.

The Brexit Party leader said he went out fishing with a friend on November 29 and was five miles off the coast of Dover when they spotted the small orange boat with two men on board.

In a video, the 56-year-old said that at one point both migrants plunged into the water amid strong winds and rough waves before he and his companion were able to keep them safe until help arrived.

He said: ‘They had given up rowing, it was awful weather and there was no boat around. There is no question they wouldn’t have survived. One of them would have been dead after an hour with hypothermia and the other not long after.’

Mr Farage posted a video of his boat approaching the two migrants on his YouTube channel. 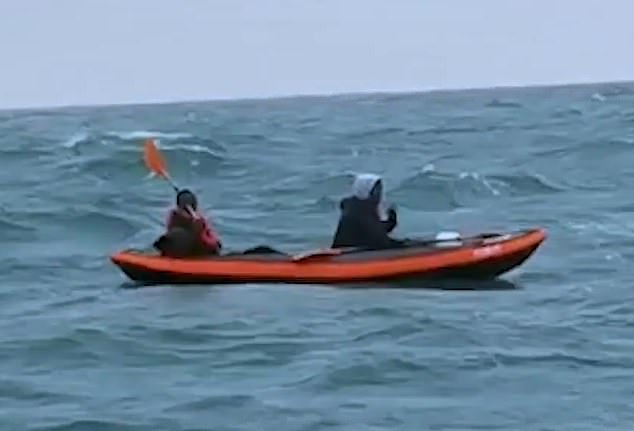 Mr Farage said he decided to go fishing because the weather forecast was good, but this turned out to be wrong.

‘It wasn’t sunny, it was really overcast,’ he said in a video posted on Twitter. ‘The wind was much stronger than we expected and the waves a lot rougher.

‘Five miles out into the English Channel, at 8.10am, we saw in the distance a small orange boat bobbing around.

‘We made our way over to it and it was an inflatable kayak with two blokes in it. They had given up paddling and were just drifting.

‘One of them was not in a good state at all. We came alongside and said to them that we were going to call the coastguard, help would be coming.’

Mr Farage said the conditions were ‘pretty choppy’ at the time, and the situation quickly made a turn for the worse.

‘Perhaps they got a bit excited that we were there and the boat turned over, throwing the two men into the water,’ he said. 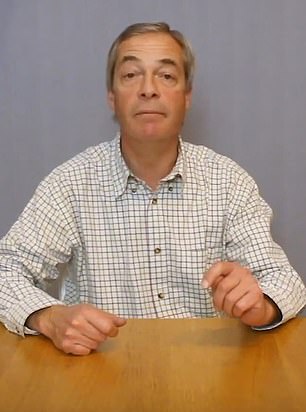 Mr Farage said: ‘They had given up rowing, it was awful weather and there was no boat around’

‘One of them had a life jacket on, the other one didn’t – he went straight under then came back up after a few seconds.

‘Luckily this happened at slack tide [the quiet period between high and low tides] otherwise this story would have a very different ending.

‘They were able to grab on to each end of the upturned kayak. We decided to get one of them into the boat.’

It was a struggle to get the migrant onboard because the boat had high sides and he did not have enough strength to force himself up, Mr Farage said.

So instead he and his friend turned the kayak over and put the man back into it, before doing the same to his companion.

The 56-year-old continued: ‘They were saved but very wet and very cold. We gave them a few cups of hot coffee with sugar.

‘The Border Force turned up, who we pay so much money for.

‘Their instructions were for us to take these guys out and put them on our boat and they’d collect them for us.

‘We said we had tried already and it was very difficult. If we had pulled one up the other could have been tipped into to the water, so there was quite a stand-off.

‘I was hugely unimpressed by their professionalism.’ 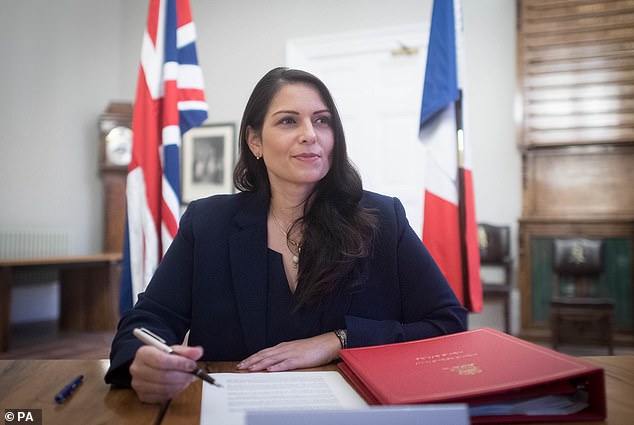 Mr Farage said issue was resolved around an hour later when an RNLI lifeboat came alongside the migrants and helped them on board.

He said the episode was a warning to the Government, which came just days after Priti Patel announced she had agreed to pay France to double the number of officers patrolling beaches.

‘Bear in mind all of this is taking place when we’ve given the French government another £28million to stop the boats from coming,’ he said.

‘We need to send signals or otherwise what I saw today will lead to a series of tragedies, and possibly big ones.

‘This was a kayak with two people but there have been bigger ones with 40, 50, 60 people on board…

‘We have to say that anyone who comes by this route cannot be allowed to stay like the Australians do. Otherwise we will see tragedy.’ 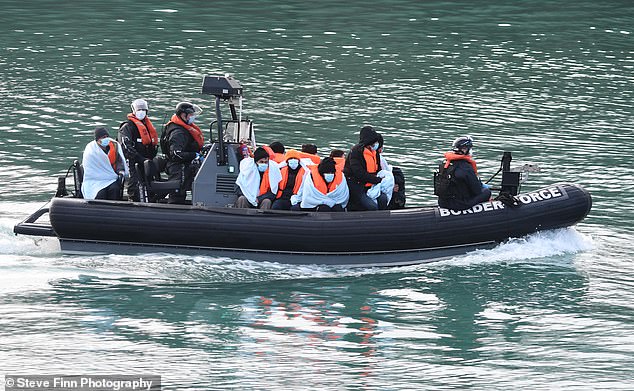 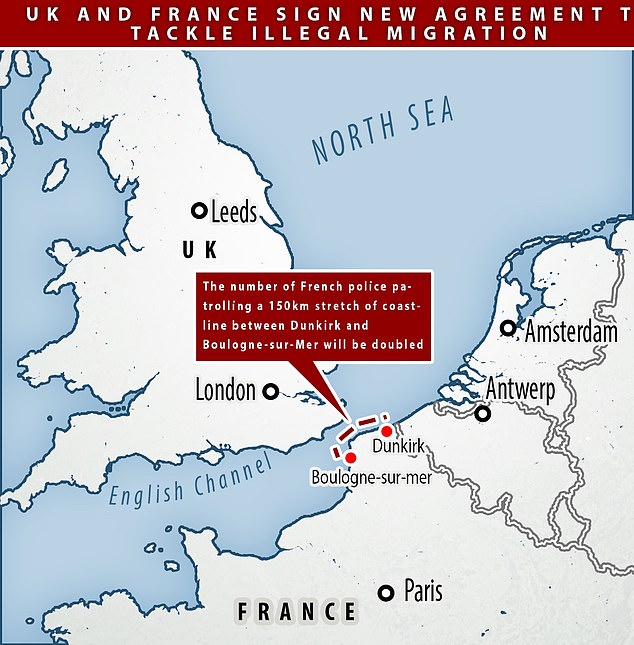 Mr Farage demanded new rules to allow Britain to return migrants to France if they entered the country illegally, adding: ‘Something needs to happen, and fast.’

The recent deal was signed during a virtual meeting between the Secretary of State and France’s Interior Minister Gerald Darmanin yesterday with a pledge to make the route ‘completely unviable’ for people smuggling gangs.

Miss Patel has faced criticism for the Government’s failure to tackle a wave of migrants in small boats crossing from northern France.

Reports suggested Prime Minister Boris Johnson was considering axeing her as home secretary in a new year reshuffle because of the debacle.

The dangers of the crossing was highlighted last month when a Kurdish-Iranian family-of-five lost their lives.

An RNLI spokesman told MailOnline: ‘I can confirm that the Rye Harbour Atlantic 85 lifeboat was on exercise on Sunday morning when it was tasked at 8.38am to help assist two people.

‘The casualties and kayak were picked up by the lifeboat and were then taken to shore by Border Force. The lifeboat returned to station to be cleaned in line with Covid-19 stipulations and then returned to exercise.’ 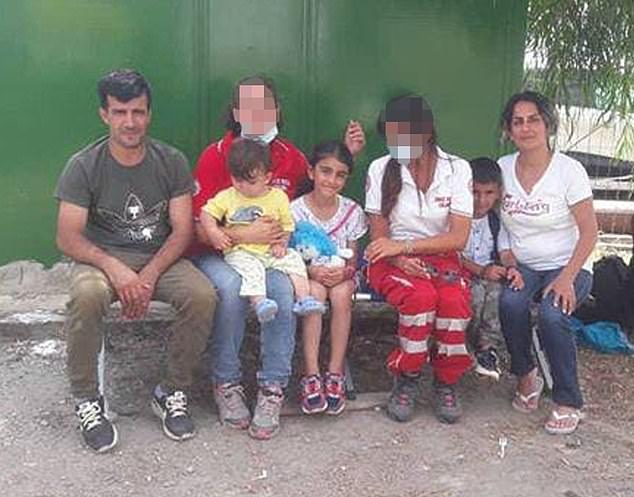 On October 27, Rasoul Iran-Nejad and his wife Shiva Mohammad Panahi, both 35, lost their lives along with their children Anita, nine, and Armin, six. Their baby son Artin, just 15 months old, was also on board and is missing, presumed dead