COVID cases are surging across all parts of the country as the mutant strain continues its spread, the Prime Minister said tonight.

Boris Johnson said the number of patients in hospital with coronavirus soared by a third in a week, as he announced a new round of lockdown. 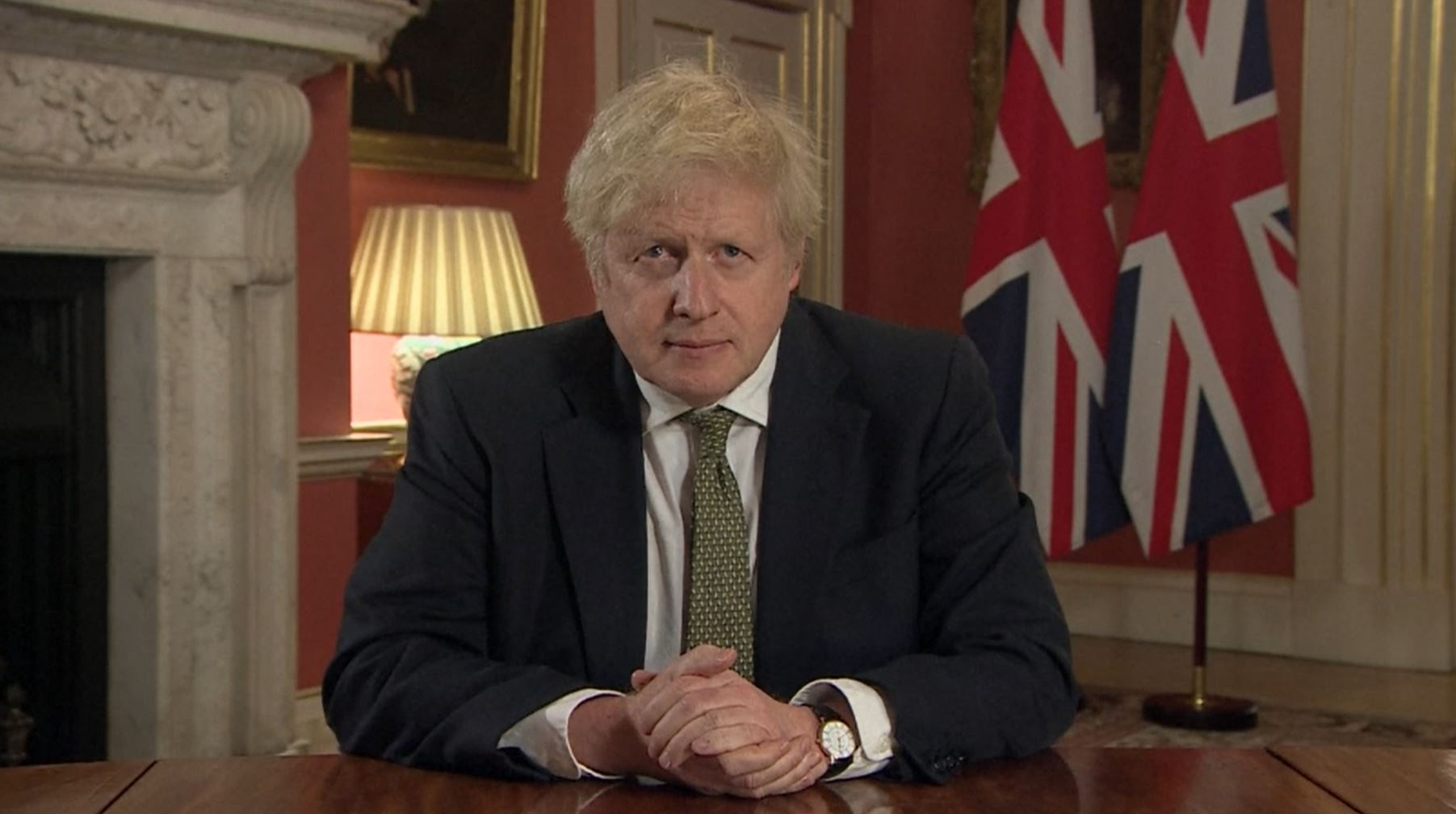 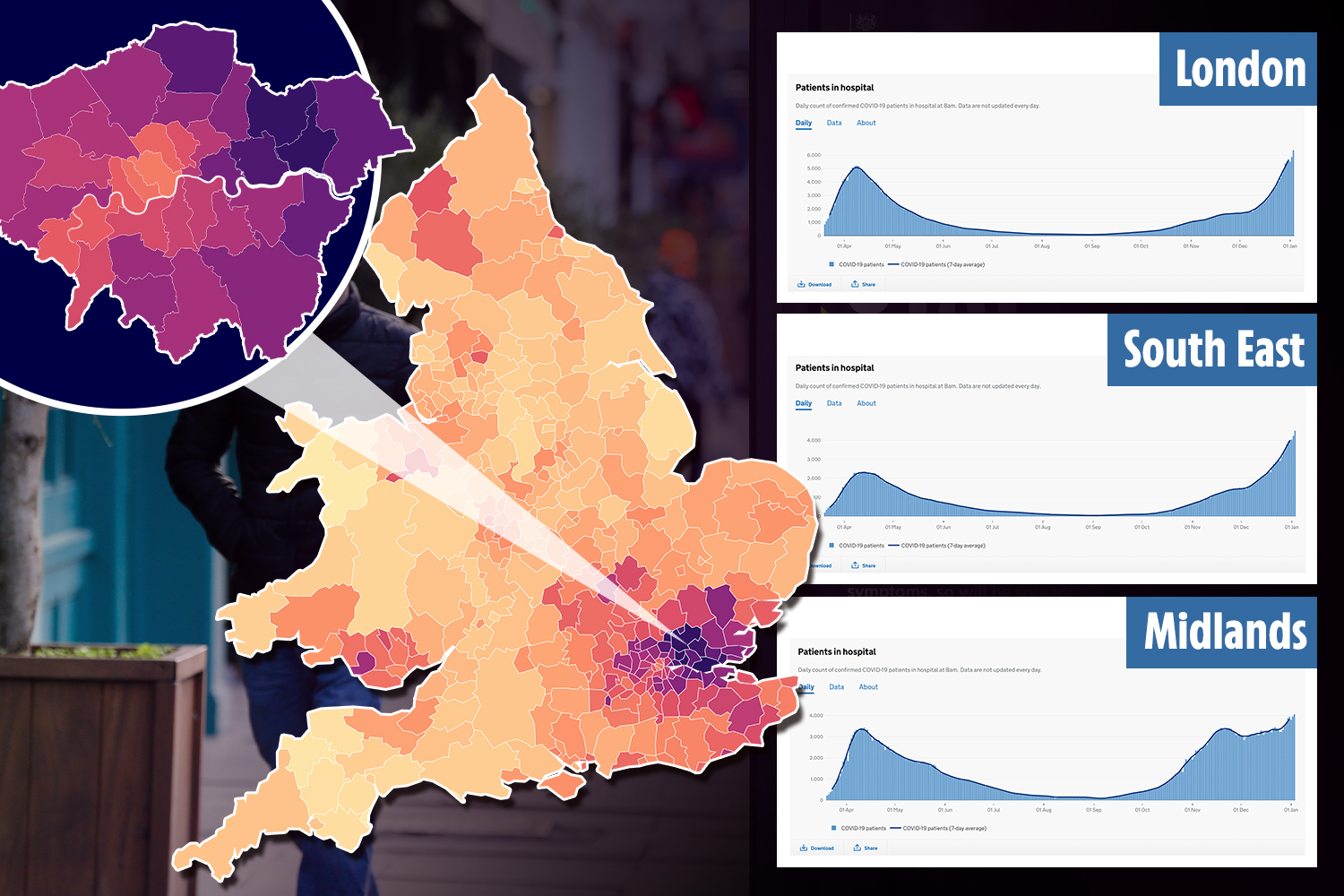 Meanwhile, hospital admissions are now 40 per cent higher than at the peak in April -when on April 12, 18,974 people were admitted to hospitals across England.

The Prime Minister said: "As I speak to you tonight, our hospitals are under more pressure from Covid than at any time since the start of the pandemic

"We have new variant and it's frustrating and alarming to see how it has spread.

Mr Johnson then revealed that a national lockdown would be implemented once again, coming into force on Wednesday morning and lasting until at least mid-February.

He added: "For now we need to stay at home, protect the NHS and save lives".

Under the new restrictions schools will also be closed, a move the Prime Minister had said he was "reluctant to take".

It comes as the UK recorded the highest ever daily case toll of 58,784 as new infections pass the 50,000 mark for the seventh day in a row.

Cases have remained high for a week now as hospitals struggle to cope with patients numbers – with 407 new deaths today.

Thousands of people are becoming infected each day after mingling at Christmas and the spread of the mutated strain.

Earlier today the NHS raised the UK to the highest level on the Covid-19 alert system.

They warned the NHS is at risk of being overwhelmed within 21 days "in several areas" without further action.

Data from Pubic Heath England (PHE) shows that hospital admission in most regions have now surpassed what they were at the peak of the pandemic in April.

London has the highest regional rates of new coronavirus infections in the country and earlier today it was revealed that the Nightingale Hospital was ready to reopen its doors as cases continue to rise.

When it comes to infection rates across England as a whole, 11 of the worst infected places in the country are in London.

The capital is also struggling when it comes to hospital admissions and as of January 3, 6,358 patients were in hospital as of 8am.

This is more than double two weeks ago and the rate has surpassed the peak during the first wave in April of 5,201.

Before the new lockdown measures were introduced, London currently under Tier 4 restrictions which included no household mixing and all non-essential shops are closed.

Eastern England has the second highest rate of new Covid cases and the whole region was also in Tier 4.

Thurrock, Epping Forest and Broxbourne are in the top six of the most infected areas in England.

As of January 3, more patients are in hospital with Covid in the region than at any point since the pandemic took hold in the UK in March.

Both London and the South East have been plagued by a new variant of the virus – which is believed to have first been discovered in the South East.

The region follows a similar pattern to London in that it has had both a sharp rise in infections and hospitalisations.

Dartford, Gravesham and Rushmoor are the most infected places in the region and as of 8am on January 3, 4,501 patients are in hospital with the virus.

This is a 76 per cent increase over a two week period and numbers in the region peaked at 2,347 during the first wave of the virus.

Like London and Eastern England, the whole of the South East was under Tier 4 restrictions.

While most of the West Midlands was in Tier 4 – Worcestershire and Shropshire had been in Tier 3.

Data from the region is combined with the East Midlands.

Many people living in the East Midlands have been living under coronavirus restrictions for months now after Leicester became a Covid hotspot during the summer months.

The whole of the East Midlands was in Tier 4 except from Rutland.

The South West was split into Tier 3 and 4 but the region has the second lowest rate of coronavirus cases in the country.

The Isle of Scilly had been the only place in the country to be in Tier 1 and is also in the South West of England.

But residents in the former Tier 1 areas will now be plunged into national lockdown with the rest of the country.

As of January 3 there were 1,323 patients in hospital with Covid-19 in South-West England- an increase of 20 per cent in just a week.

Bournemouth Christchurch & Poole has the highest local rate in the region with 434.3 cases per 100,000.

Several areas across the North West had previously been coronavirus hotspots including Manchester and Blackburn with Darwen.

As on January 3 there were 2,605 patients in hospital with the virus, up 11 per cent on the week before.

In November hospital rates in the region had reached 3,158.

Carlisle has the highest rate in the region and it was in Tier 4 along with the rest of the North West, aside from Liverpool which had been in Tier 3.

Hospital data for north-east England is combined with the neighbouring region of Yorkshire & the Humber.

Infection rates in Yorkshire & The Humber are the lowest in the country and currently sit at 244.3 cases per 100,000.

It has been the only region entirely in Tier 3 and York has the highest rate of infections with 428.3 cases per 100,000.

Mr Johnson suggested that if the death toll starts to fall then we could "steadily" move out of lockdown.

In his address to the nation this evening he added: "If our understanding of the virus doesn't change dramatically, once again, if the rollout of the vaccine programme continues to be successful, if deaths start to fall as the vaccine takes effect and – critically – if everyone plays their part by following the rules, then I hope we can steadily move out of lockdown."

The aim he said, would be to reopen schools after the February half-term, cautiously moving regions back through the tier system.