An international climate adaptation expert has questioned spending public money on dams in the Murray Darling Basin because climate change radically reduces the likelihood they will fill.

Professor Mark Howden, director of the Institute for Climate, Energy and Disaster Solutions at the Australian National University and a vice-chair of the United Nations Intergovernmental Panel on Climate Change, will tell a conference of river communities on Wednesday that river flows in the basin are worse than climate change models predicted. 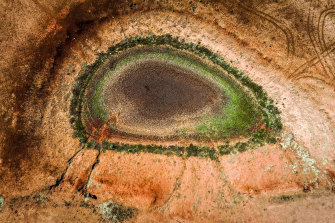 A windmill stands next to a dried-up dam on Australian farmer Ash Whitney’s drought-affected property located in the Goolhi area on the outskirts of Gunnedah, NSW, during the 2019 drought.Credit:Getty Images

Average river flows in the Murray Darling Basin have already dropped by 39 per cent over the past 20 years, with most of this due to climate change, he said.

“We are already at or below the worst case scenario predicted for 2050,” Professor Howden said in an interview before the conference.

Governments and industry organisations need to support “dynamic adaptation”, with new “overarching” institutions to make sure lessons learned by farmers were shared region to region and state to state, he said.

Changes would be needed to land management, but new dams – as promised by the federal and NSW state governments – were unlikely to be the best solution.

Wednesday’s River Reflections conference, held by the Murray Darling Basin Authority in the NSW town of Griffith, will also be addressed by federal Water Minister Keith Pitt – who has pushed the idea of new dams and committed $325 million of federal government money to expanding the Wyangala Dam, on the Lachlan River. The cost of the project was originally estimated to be $650 million, but The Age and The Sydney Morning Herald have previously reported that it is now estimated to be as high as $2.1 billion.

“The system is showing stress when we’ve lost 39 per cent of those river flows. And unfortunately, the projections are for further declines in the future.”

Building and expanding dams was a NSW government election commitment, but a state parliamentary inquiry found in March that the Wyangala Dam expansion had been approved before a business case or environmental impact statement was completed, and without enough consideration of other options to ensure water security. The existing dam had only filled twice in the past 20 years.

Professor Howden said, “Politics always plays a significant part in these things because politics is about winners and losers” but that if climate change wasn’t properly planned for “there are potentially going to be a lot more losers”.

He said that 20 years ago Australia was leading the world in water governance, with government buying back water from irrigators for the environment and setting up a trading system that ensured water was used where it was most valued.

But this had been designed around 100 per cent of river flows, “The system is showing stress when we’ve lost 39 per cent of those river flows. And unfortunately, the projections are for further declines in the future,” he said.

“That will mean that competition across the basin for water will ramp up significantly, so we need to be thinking about how to change our policies and mechanisms.”

He called for new government agreements and “some sort of institute or overarching institution” to drive research and the sharing of information between different regions and industries.

Farmers were always experimenting from season to season, he said. “We really need to ramp up the capacity to learn from all those experiments, so that someone down the catchment or up the catchment doesn’t have to go down a dead end that has already been explored.”

Professor Howden said changes to crop mix would also have to be considered. Embargoes should be considered on new plantations of water hungry crops such as almond trees. Victoria has already introduced such an embargo, but new plantations are still being established in NSW and South Australia.

“Clearly there is a need to open up discussions to ensure the things we do now don’t lock us into problematic pathways in the future,” he said.

As for cotton, which over the last decade had begun to dominate more areas of the basin, “farmers and industries need to think about the risks and benefits of moving into different places … Increasingly, good management will be good risk management.”

Professor Howden said that large parts of Australia were still in drought, despite “one of the wetter years we are likely to have”.

The “black summer” of 2019-20, with devastating bushfires and drought “looks like it will be a relatively standard if you look forward a few decades”.

Professor Howden said that politics was behind public opinion on climate change. “I think there a gap between where the politics is and where the public is and ultimately in a democracy that’s not sustainable.”

As for the NSW and federal government commitment to new dams, “If there’s not a good case for that, if additional investment will bring no additional benefits or not adequate benefit then we have to question whether that’s a good expenditure of public money…there’s plenty of questions being raised about dams, but I’m not sure they are necessarily being heard.”

Professor Howden admitted his message could be seen as “doom and gloom”, but that if farmers adapted, there were also opportunities.

During the millennium drought, water availability in the basin had been “shredded” but adaptation by farmers meant the total economic output remained unexpectedly high.

“Change does bring opportunity, but mostly to those who are prepared.”

The River Reflections conference is part of an increased effort by the Murray Darling Basin Authority to bring together basin communities in the shadow of climate change and challenges with water management.

Federal Water Minister Keith Pitt is scheduled to give the keynote address on Wednesday, and Environment Minister Sussan Ley will also speak.