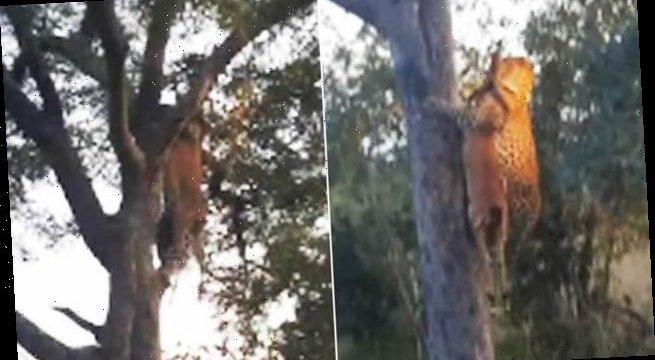 Raw power! Leopard shows off its impressive strength as it scales a tree carrying an impala in its jaws

Animal lovers on a game drive in South Africa witnessed the brute strength of a leopard as it climbed a tree in front of them with its fresh catch still in its mouth.

The incredible footage was posted on Twitter by Ashok Nellikunja and shows the incredible wild cat scale a tree with ease despite carrying an impala in its jaws.

At the start of the video the leopard looks up and down the tree to judge how high it is and whether it can make the climb. 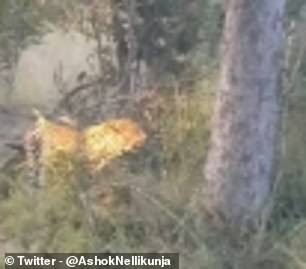 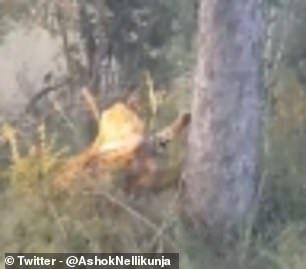 It then clamps its teeth around the neck of the impala and plants its front paws on the tree.

The leopard jumps up and digs its claws in.

Within 15 seconds the leopard is perched on atop the tree with its dinner dangling from a branch.

Someone off camera is heard saying: ‘That is power!’ 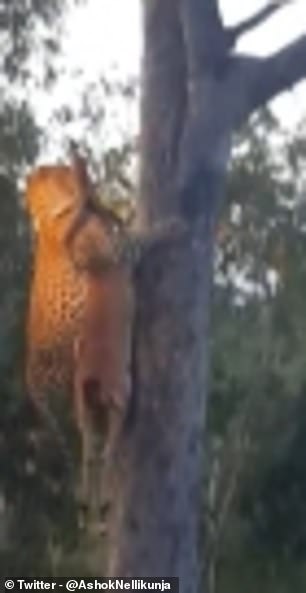 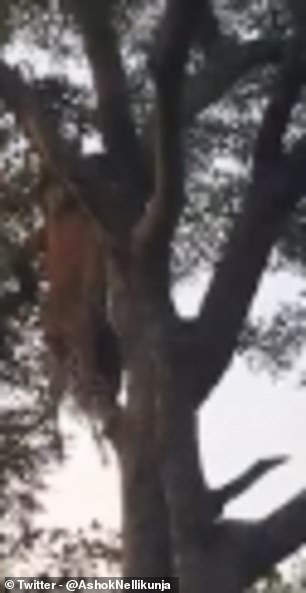 Why did the leopard carry its prey into a tree?

Leopards are capable of carrying animals heavier than themselves and will often drag their prey into the fork of a tree several metres off the ground.

This tree ‘lardering’ protects the carcass against scavengers and allows a few days of undisturbed feeding.

The climb was filmed at Kruger National Park, South Africa, on March 24 at 6pm.

After the lion, the leopard is the largest African cat weighing between 130-150lb.

They have a life span of 15 years but prefer to live alone and in silence, occasionally emitting a cough-like call.

When hunting prey, like the impala it carried up the tree, it gets as close as possible before exploding towards its target at speeds up to 37mph.

Leopards have a varied diet and can eat anything from antelope to baboons to fish.