The judges also included in the scope of the probe killings in the Davao area from November 1, 2011, the date the Philippines joined the ICC, to June 30, 2016. Duterte is the former mayor of Davao. 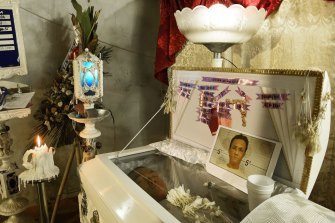 The body of Ramil Miranda,35, lies in his coffin at his wake in the Manila suburb of Malabon. The known drug user was a victim of an extra judicial killing in 2017. Credit:Kate Geraghty

She said a preliminary probe she began in February 2018 found “a reasonable basis to believe that the crime against humanity of murder has been committed” in the country between July 1, 2016 – the day after Duterte began his presidency – and March 16, 2019, when he withdrew his country’s membership from the court.

In a written decision on Thursday (AEST), judges who considered Bensouda’s request found a “reasonable basis to proceed with an investigation” into killings committed throughout the Philippines as part of the war on drugs, saying they appeared to amount to a crime against humanity under the court’s founding statute.

The court said in a statement that the judges ruled that “based on the facts as they emerge at the present stage and subject to proper investigation and further analysis, the so-called ‘war on drugs’ campaign cannot be seen as a legitimate law enforcement operation, and the killings neither as legitimate nor as mere excesses in an otherwise legitimate operation.” 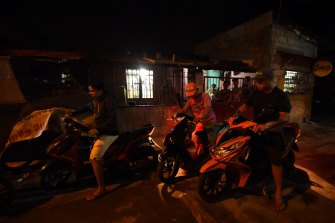 Police on motorbikes leave the scene where three men were slain in a drug related killing in Caloocan, Manila, Philippines, in September. Credit:Kate Geraghty

They added that “the available material indicates, to the required standard, that a widespread and systematic attack against the civilian population took place pursuant to or in furtherance of a State policy.”

When Duterte announced he was withdrawing his country from the court he defended the campaign as “lawfully directed against drug lords and pushers who have for many years destroyed the present generation, specially the youth.”

More than 6000 mostly poor drug suspects have been killed, according to government pronouncements, but human rights groups say the death toll is considerably higher and should include many unsolved killings by motorcycle-riding gunmen who may have been deployed by police.

Duterte has denied condoning extrajudicial killings of drug suspects, although he has openly threatened suspects with death and has ordered police to shoot suspects who dangerously resist arrest.

When Bensouda announced she had asked for authorisation to investigate, Duterte’s spokesman, Harry Roque, called the move “legally erroneous,” saying the ICC, as an international court of last resort, could only intervene if a country’s judiciary and prosecutorial system fail to work and investigate domestic crimes. Roque cited many pending murder and other cases involving the government’s campaign against illegal drugs which were being tried by Philippine courts.

“The International Criminal Court’s decision to open an investigation into brutal crimes in the Philippines offers a much-needed check on President Rodrigo Duterte and his deadly ‘war on drugs’,” said Carlos Conde, the rights group’s senior Philippines researcher. “Victims’ families and survivors have reason to hope that those responsible for crimes against humanity could finally face justice.”

Bensouda has since left the court and been succeeded by British lawyer Karim Khan.

Duterte has previously sought to shrug off the investigation and on Thursday his chief presidential legal counsel Salvador Panelo said the ICC had no jurisdiction.

“The president’s position does not change. ICC is bent, at the inception, of proceeding with this case in violation of our constitution and defiance even of its own Rome statute,” Panelo told DZBB radio station.

Panelo said ICC investigators would not be permitted to enter the country to conduct the probe.