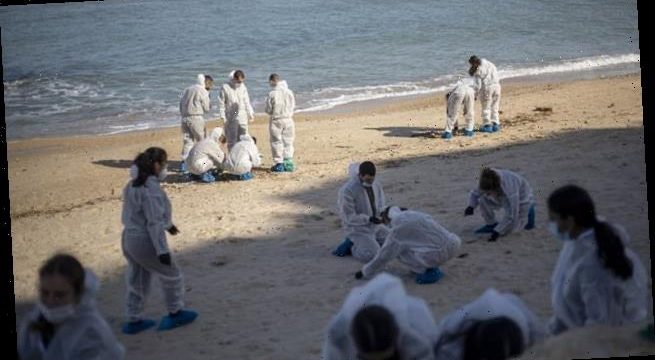 Israel has accused Iran of ‘eco-terrorism’ after a tanker spilled tons of oil in the eastern Mediterranean last month.

The ship was smuggling crude oil from Iran to Syria when it spilled its cargo in early February.

Environmental minister Gila Gamliel on Wednesday claimed this was an intentional attack without providing evidence.

Today the junior minister in Prime Minister Benjamin Netanyahu’s Likud party doubled-down, claiming it was an act of terrorism to kill off Israel’s marine life. 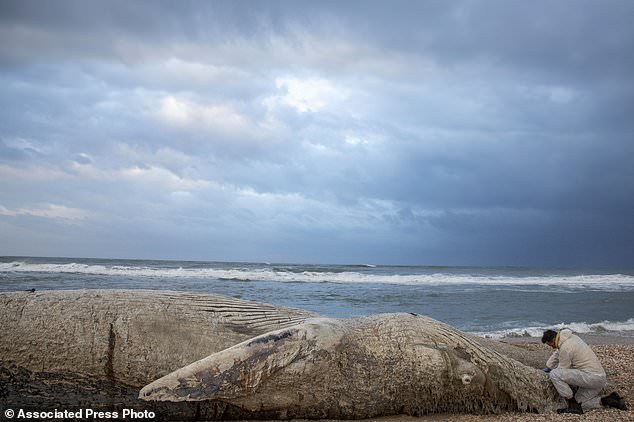 A marine veterinarian, takes samples from a 55ft long dead fin whale washed up on a beach in Nitzanim Reserve, Israel, on February 19 after the oil spill 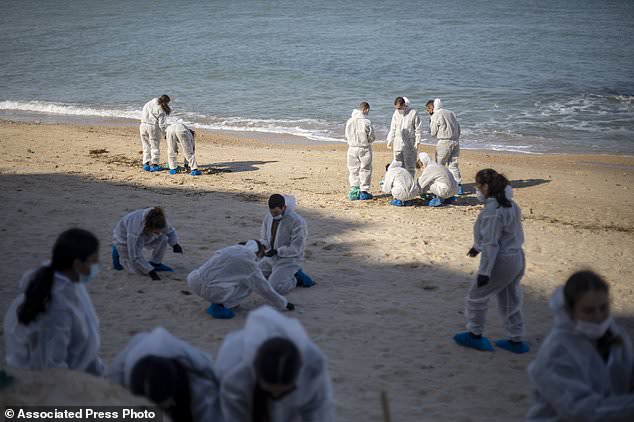 Israeli soldiers wearing protective suits clean tar from a beach after an oil spill in the Mediterranean Sea in Sharon Beach Nature Reserve, near Gaash, Israel, on February 22

Asked in an interview on Army Radio whether she could prove the spill was an intentional attack, Gamliel said: ‘To say that this isn’t terrorism, that it was an accident, is an inappropriate approach to the incident.’

She added: ‘The fact that no one knew about the ship that smuggled crude oil from Iran to Syria, that dumped oil and turned off its radar is a failure that needs to be investigated.’

She said that Israel’s Defense Ministry ‘had to give explanations.’

Neither the Israeli military, foreign ministry nor the prime minister’s office has commented on Gamliel’s claims.

Iranian officials have not publicly acknowledged the allegation or responded to requests for comment.

More than 1,000 tons of tar are estimated to have washed onto Israel’s Mediterranean coastline last month, causing extensive environmental damage and forcing the closure of beaches to the public. Israel’s Nature and Parks Authority has called the incident one of Israel’s worst environmental disasters. The clean-up is expected to take months.

On Wednesday, the Environmental Protection Ministry identified the ship it believed was responsible for the Feb. 1 oil spill as the the Panama-flagged, formerly Libyan-owned tanker named Emerald.

Ministry officials investigating the incident said it was unclear whether the spill was deliberate or accidental, but said they received no warning about the incident until tar started washing up on shore weeks later. 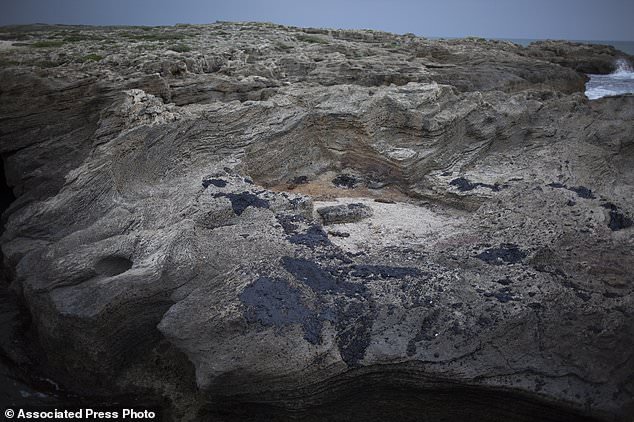 Tar is stuck on rocks after an oil spill in the Mediterranean Sea, at Tel-Dor Nature Reserve, in Nahsholim, Israel

Ami Daniel, CEO of Windward, a maritime shipping intelligence company that was involved in the investigation, told The Associated Press that several aspects about the Emerald’s behavior – from shutting off its transmitters, to irregular traffic and ownership irregularities – breached U.S. and British standards and pointed to the vessel’s involvement in smuggling oil from Iran in violation of international sanctions.

‘All risk indicators are consistent with the deceptive shipping practices at a very high likelihood that this is an Iranian operation to provide crude oil into Syria,’ he said but declined to comment on whether the spill may have been an intentional attack.

Gamliel´s office declined requests for clarification. But in an English language statement, she said ‘Iran is operating terrorism by damaging the environment.’

Israel accuses archenemy Iran of developing nuclear weapons, a charge Iran denies. Israel also cites Iran’s support for hostile militant groups across the region – such as the Palestinian Hamas and the Lebanese Hezbollah – and its military presence in neighboring Syria. Israel has acknowledged carrying out hundreds of airstrikes on targets connected to Iran and its proxies in Syria.