Victorians are dobbing on their neighbours in record numbers with hundreds of thousands of calls made to police to report COVID breaches since the start of the pandemic.

Data released by Victoria Police shows that at the height of the first wave of the pandemic, the police assistance line received about 100,000 calls during the month of April, 66 per cent more than during an average month.

Nearly four in 10 were people dobbing in other Victorians for breaching coronavirus restrictions.

Recent crime statistics data, which has provided a detailed picture of how enforcement strategies played out during the first wave of the pandemic, show coronavirus breaches were the 20th most common crime in the year to June, out of 114 distinct offence categories that police track.

There were 6062 breaches of coronavirus restrictions recorded between March and June this year – this was more than the number of indecent assaults (5869), drug trafficking offences (5021) and drunk and disorderly offences (4805) over the entire 12 months to June.

Police nabbed 5474 individuals for flouting public health orders. Three-quarters of them were men and their average age was 29.5.

More than half (65 per cent) had criminal records and roughly one in seven were processed for another type of offence – mainly drug possession – at the same time they were fined for the COVID-19 breach. 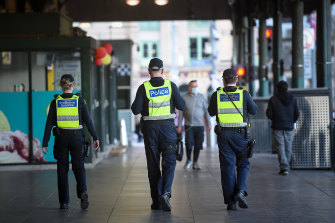 Coronavirus breaches were the 20th most common crime in the year to June, out of 114 distinct offence categories that police track.Credit:Justin McManus

Police also recorded a steep rise in drug offences during the first wave of the pandemic. Between April and June, drug possession charges were 40.8 per cent higher than the same period last year, with cannabis, methylamphetamine, prescription drugs and GHB the main drugs seized.

Police say increased foot patrols during the pandemic, which meant officers stopped and talked to people more regularly on the street, may have contributed to the increase.

“The restrictions enforced by the Chief Health Officer have also seen a significant reduction in the amount of people out of their homes,” a spokesman said.

“Combined, this has meant police are more readily able to identify suspicious or illegal activity in the community, leading to detections of drug-related offending on Victoria’s streets.”

Sam Biondo, the executive officer of the Victorian Alcohol and Drug Association, said there was an increase in the number of people struggling with addiction issues presenting to their agencies with financial stress.

He said infringements add to that burden, and for those going through with high debts already, there was little deterrence value in a fine.

“People have nothing to lose. They have nothing. They are already in bad straits, they are homeless or couch surfing, probably have a dual diagnosis with mental health or health issues,” he said.

“It will do absolutely nothing to give these people a fine, they have no way on earth to pay for it.

“I can understand why the authorities are seeking to use some of these levers to keep people in line, however there is a group of individuals that these levers don't work for. It’s like trying to tell hardcore smokers they can’t smoke. It’s extremely difficult.”