Taipei: Hong Kong police have arrested a man accused of booing the Chinese national anthem while watching an Olympic event at a shopping centre.

The 40-year-old man was allegedly waving colonial-era Hong Kong flags and booing, while urging others to join him in insulting the national anthem, according to a police statement posted on Facebook. 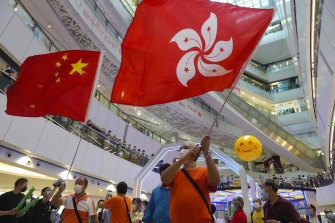 People wave a Hong Kong flag and a Chinese national flag as they watch Olympics events at a shopping mall in Hong Kong on Friday, July 30. Credit:AP

Hong Kong passed a law in June last year that criminalised any actions that insult the national anthem. Violating the law can mean a fine of up to $HK50,000 ($8756), and up to nine years in prison.

China’s central government criminalised actions that insult the national flag and emblem in amendments to the law last October, which is also applicable to Hong Kong, a former British colony.

The suspect was standing in a crowd with others on Monday to watch Hong Kong fencer Edgar Cheung Ka-long in a match that would win him gold, local media reported.

The booing started at the medal ceremony, when the national anthem began playing.

The man was later arrested by Hong Kong police, who said there may be additional arrests and that an active investigation is under way.

Hong Kong was rocked by months of sometimes violent anti-government protests in 2019, which led Beijing to crack down on dissent, including arresting leading pro-democracy activists in the city.

The shopping mall broadcast was a rare occasion for Hong Kong people to gather, with groups limited to a handful of people since early 2020 because of the coronavirus.

Since the law took effect, most prominent pro-democracy politicians and activists have been charged, with some jailed. Others have into self-exile.

Chinese and Hong Kong authorities say the law was vital to restore stability and deny such prosecutions are politically motivated.