Washington: The intelligence that caused the White House to escalate its warnings about a threat from Iran came from photographs of missiles on small boats in the Persian Gulf that were put on board by Iranian paramilitary forces, three US officials said.

Overhead imagery showed fully assembled missiles, stoking fears that the Islamic Revolutionary Guards Corps would fire them at US naval ships. Additional pieces of intelligence picked up threats against commercial shipping and potential attacks by Iranian proxy forces on US troops in Iraq. 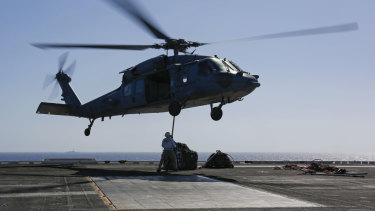 The Trump administration has been on high alert in response to what military and intelligence officials have deemed specific and credible threats from Iran .Credit:US Navy

But just how alarmed the Trump administration should be over the new intelligence is a subject of fierce debate among the White House, the Pentagon, the CIA and America's allies.

The photographs presented a different kind of threat than previously seen from Iran, said the three officials, who spoke on the condition of anonymity because they were not authorised to talk about it publicly. Taken with the other intelligence, they could indicate that Iran is preparing to attack US forces. That is the view of John Bolton, President Donald Trump's hard-line national security adviser, and Secretary of State Mike Pompeo.

But other officials — including Europeans, Iraqis, members of both parties in Congress and some senior officials within the Trump administration — said Iran's moves might mostly be defensive against what Tehran believes are provocative acts by Washington. 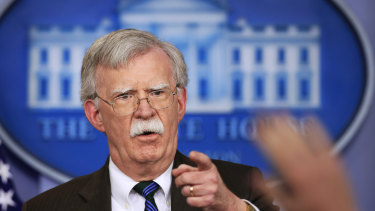 Either way, the questions about the underlying intelligence, and complaints by lawmakers that they had not been briefed on it, reflect the deep mistrust of Trump's national security team.

The State Department ordered the partial evacuation of the US Embassy in Baghdad on Wednesday, a move that one senior US official said was an overreaction to the intelligence and could possibly do more to endanger diplomats than to keep them safe.

Speaker Nancy Pelosi of California, in a closed-door meeting of House Democrats, criticised the administration's lack of transparency on the intelligence, according to a Democratic aide. She also said that the administration must consult Congress before taking any action.

Pelosi spoke hours after the evacuation of embassy personnel was ordered by Pompeo, whom as a congressman was one of the fiercest critics of the Obama administration's handling of the 2012 attacks on the US diplomatic mission and annex in Benghazi, Libya. 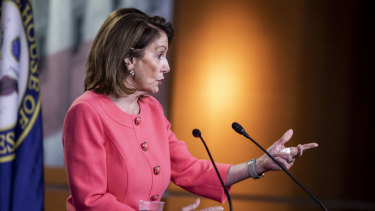 But the senior US official said Pompeo was overreacting, and Iraqi officials said the threat level portrayed in the intelligence was not urgent enough.

Intelligence officials are set to meet on Thursday, US time, with senior congressional leaders for a briefing on the new intelligence. Nine US national security and congressional officials discussed the intelligence and the closed-door talks about it on the condition of anonymity because they were not authorised to speak about it publicly.

Until recently, US government officials had said that Iran was continuing its usual support to militant groups and proxy forces in the region, but was not seeking a fight.

On its own, two US officials said, the photograph was not compelling enough to convince the American public and lawmakers, nor foreign allies, of the new Iranian threat.

That changed on May 3 when what officials described as new intelligence significantly shifted the Defence Department's assessment of the immediacy of the threat. The military's Central Command asked that an aircraft carrier and bombers be sent to the Persian Gulf, rebuilding a show of deterrent force that some officials believed had been eroded by recent troop draw-downs.

On May 5, the White House sent Bolton to announce that the aircraft carrier Abraham Lincoln would sail sooner than expected to the gulf. Choosing Bolton to deliver that message fuelled skepticism among allies and congressional Democrats.

As military officials struggled to show that the threat from Iran was growing, intelligence officials declassified a photograph of one of the sailing boats, called dhow in Arabic, carrying what was described as a functional Iranian missile.

The Pentagon has not released the photograph. On its own, two US officials said, the photograph was not compelling enough to convince the American public and lawmakers, nor foreign allies, of the new Iranian threat.

But releasing other supporting images could compromise secret sources and methods of collecting intelligence, the two officials said. 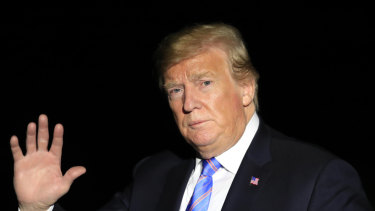 US President Donald Trump has upped the ante on Iran. Credit:AP

CNN first reported that Iranian missiles were being moved onto ships last week. But new details have emerged in recent days, and US officials have concluded Iran did not intend to transfer the weapons to proxy forces.

Combined with other intelligence, the boats signalled a troubling Iranian mobilisation of forces that officials said put US ships, bases and commercial vessels at risk. They were one of at least three streams of intelligence that, together, alarmed national security officials and convinced many that a more serious threat was emerging.

The United States also recently learnt of conversations between the Revolutionary Guards and Iranian proxy forces discussing attacks on US troops and diplomats in Iraq. The conversations themselves are nothing new, but the recent discussions were held with unusual frequency and included specifics about strikes on American targets.

US officials also collected intelligence about Iran targeting commercial shipping, prompting a warning to mariners issued last Friday. That was one reason that led US officials to believe Iran was behind this week’s sabotage of four tankers off the coast of the United Arab Emirates. The officials, however, still do not have conclusive forensic analysis that shows Iran was to blame.

In a sign of the rising tensions over the handling of the Iran threat, US military officials in the Middle East stopped responding to media questions about the tanker investigation, and instead referred journalists to the White House.

Republican Senator Marco Rubio, who sits on the Foreign Relations and Intelligence committees and who was briefed last week on the new intelligence, said on Wednesday that while he did not want a war with Iran, the United States must respond if attacked.

"I've been here eight years. This is by far, the single most imminent potential conflict of this significance that I have been around," Rubio said. "This is real. This is not a fake thing. It's not being made up by somebody. This President does not even want to have troops in the Middle East."

Democract Senator Chuck Schumer, the Democratic leader, said flaws in the Trump administration's approach were evidenced in an article by The New York Times that reported on Pentagon plans for sending as many as 120,000 troops to the Middle East if hostilities with Iran escalated.

"Did we learn the lessons of the last decade?" Schumer said on the Senate floor. "There is an alarming lack of clarity here, there's a lack of strategy, and there's a lack of consultation. The President ought to come up with a strategy and make it clear to Congress."

Two US officials said Iran began mobilising its forces after provocations by Washington, including new economic sanctions on Tehran, an end to exemptions to the eight governments it had allowed to buy Iranian oil and the designation of the Revolutionary Guards as a terrorist group.

Hanging over the current disagreement is the debate over the Iraq War, and specifically then secretary of state Colin Powell's address to the United Nations in 2003. Powell's presentation included fuzzy images and partial communications intercepts, and detailed what came to be understood as wildly wrong assessments to weave together an inaccurate picture of the Iraqi government's illicit weapons.

In the current debate, Democrat Seth Moulton, a Marine veteran who served in Iraq, has introduced legislation to require the Trump administration to get congressional approval before "engaging in hostilities" with Iran. In April, Republican Senator Rand Paul, pressed Pompeo during a hearing for the same commitment, but Pompeo deflected the request.

Most Republicans signalled they supported the administration's tough line.

"Iran seems to be more aggressive and we have to push back," Republican Senator Richard Shelby,  chairman of the Appropriations Committee, said after meeting with intelligence officials. "We cannot give them a lot of space."

The divisions over the intelligence extended to US allies.

Troops from Germany and the Netherlands were pulled back to bases in Iraq. Spanish Defence officials withdrew a frigate that was part of the US-led carrier strike group heading to the Persian Gulf, to avoid entanglement in any upcoming conflict with Iran.

But the training efforts by France and the North Atlantic Treaty Organisation are continuing as normal.

The State Department ordered "non-emergency US government employees," at both the embassy in Baghdad and the consulate in Irbil, to leave the country. The order applied primarily to full-time diplomats posted to Iraq, an embassy statement said that visa services in Iraq would be suspended as a result. Contractors who provide security, food and other such services will remain in place for now.

Pompeo shared some details of the intelligence with Iraqi leaders on May 7 when he made a surprise visit to Baghdad. But US officials in Washington said the most delicate intelligence was not shared with the Iraqis, for fear their agencies have been penetrated by Iranian spies.

Tensions with Iran have been rising since May 2018, when Trump withdrew the United States from the 2015 nuclear deal that world powers reached with Tehran. US sanctions were reimposed last November, weakening the Iranian economy — perhaps more quickly than expected.