Leslie Shumaker Downey was at home babysitting her two grandchildren Monday when a message pinged on her mobile phone.

Her daughter had sent a link to a news article about a 57-year-old man with terminal heart disease. Three days earlier at the University of Maryland Medical Centre, he’d received a genetically modified pig heart. The first-of-its-kind transplant was historic, saving the man’s life and offering the possibility of saving others. 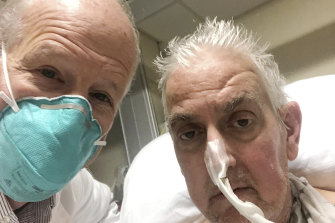 What a great breakthrough for science, Downey thought, reading the headline. Then her phone pinged again.

“Mummmmmmm,” Downey’s daughter wrote. She told her to look at the man’s name.

Downey froze. The man being heralded as a medical pioneer, David Bennett snr, was the same man who’d been convicted in 1988 of stabbing her younger brother seven times, leaving him paralysed. Edward Shumaker had spent the next 19 years in a wheelchair before having a stroke in 2005 and dying two years later – one week before his 41st birthday.

“Ed suffered,” said Downey. “The devastation and the trauma, for years and years, that my family had to deal with.” 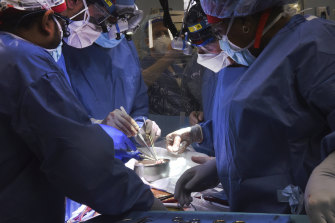 Members of the surgical team perform the transplant of a pig heart into patient David Bennett in Baltimore.Credit:AP

After Bennett got out of prison, she said, he “went on and lived a good life. Now he gets a second chance with a new heart, but I wish, in my opinion, it had gone to a deserving recipient.”

More than 106,000 Americans are on the national waiting list for an organ transplant, and 17 people die each day never receiving the organ they need. In the face of such a shortage, it can seem unconscionable to some families that those convicted of violent crimes would be given a life-saving procedure so many desperately need.

But most doctors don’t share that view. There are no laws or regulations prohibiting someone with a criminal history from receiving a transplant or an experimental procedure like the one Bennett had.

“The key principle in medicine is to treat anyone who is sick, regardless of who they are,” said Arthur Caplan, a bioethics professor at New York University.

“We are not in the business of sorting sinners from saints. Crime is a legal matter.”

While that is the official stance of federal officials and ethics committees in charge of transplant regulations, wide discretion is given at the local level to hospitals, who decide which individuals qualify to be added to the national waiting list.

At that level, other considerations are often taken into account, including a person’s history of substance abuse or a prisoner’s risk of developing an infection while in incarceration, along with access to follow-up care.

Medical ethicists argue that the criminal justice system already imposes jail time, financial restitution or other punishments on those convicted of violent offences. Withholding medical services is not a part of that punishment.

That division between the legal and medical systems exists for good reason, said Scott Halpern, a medical ethics professor at the University of Pennsylvania.

“We have a legal system designed to determine just redress for crimes,” he said. “And we have a healthcare system that aims to provide care without regard to people’s personal character or history.”

University of Maryland Medical Centre officials declined to say whether they knew about Bennett’s criminal past.

In a written statement, officials said the Baltimore hospital provides “life-saving care to every patient who comes through their doors based on their medical needs, not their background or life circumstances.”

“This patient came to us in dire need,” the officials added, “and a decision was made about his transplant eligibility based solely on his medical records.” 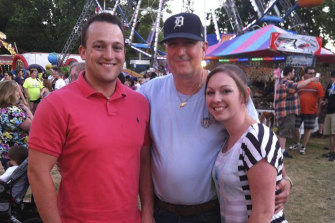 In interviews immediately after the historic nine-hour surgery, Bennett’s doctors said they proposed the experimental procedure after their hospital, and others, deemed Bennett ineligible for a normal human heart transplant.

Bartley Griffith, who performed the surgery, told reporters the patient’s condition – heart failure and an irregular heartbeat – made Bennett ineligible.

His son, David Bennett jnr, who works as a physical therapist in North Carolina, also said several hospitals had declined to accept his father onto the waiting list because he had failed in the past to follow doctors’ orders and attend follow-up visits. He also didn’t take his medication consistently.

Bennett started having symptoms of heart failure in October. On November 10, he was taken to the University of Maryland. As Bennett confronted his mortality, his son said, he wondered about his ability to help others by possibly donating his organs or helping to advance medicine in some way.

But Bennett was also still enjoying his life. He lives in a duplex, next door to one of his three sisters. He liked working as a handyman, cheering for the Pittsburgh Steelers, and spending time with his five grandchildren and his dog, Lucky.

Griffith told the New York Times that he floated the option of a pig heart to Bennett in mid-December.

“I said, ‘We can’t give you a human heart; you don’t qualify. But maybe we can use one from an animal, a pig,” Griffith recounted. “It’s never been done before, but we think we can do it.’”

“I wasn’t sure he was understanding me,” Griffith added. “Then he said, ‘Well, will I oink?’”

“It was either die or do this transplant,” Bennett said in a statement the day before his surgery.

By then, he had already spent weeks bedridden in the hospital.

It represented not a second chance but a third chance for Bennett.

More than 30 years ago, Bennett was found him guilty of battery and carrying a concealed weapon following the stabbing of Shumaker.

He was sentenced to 10 years in prison and ordered to pay restitution to Shumaker. The state’s Department of Corrections could not say how many years of the sentence Shumaker served or when he was released because the case is so old. Downey said she thinks he served about five years.

Shumaker and his family also sued Bennett, who was ordered to pay $US3.4 million ($4.7 million) in damages.

Downey said her parents never received a dime from the lawsuit. Her parents took out loans to purchase an accessible van and other equipment for their son.

Now, as Downey read about the man being lauded for his bravery, she thought about the untold pain he’d brought to her life.

Downey doesn’t deny the importance of the transplant, but she said it hurt to see people calling Bennett a hero.

“He’s being given another shot at life,” Downey said. “But my brother Ed wasn’t given a shot at life. Ed was given a death sentence.”

She read story after story about the transplant. Her brother’s name was not mentioned once.