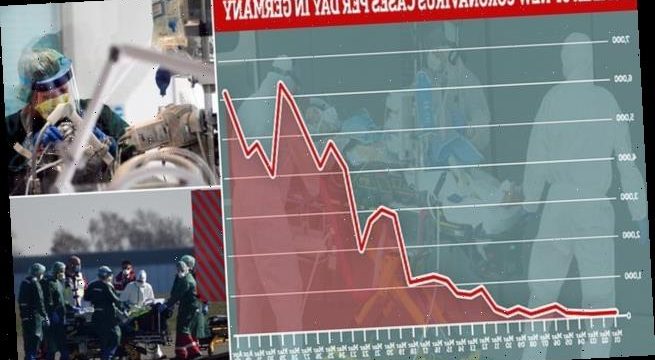 Germany sees more than 6,000 new coronavirus cases in a day for only the second time and suffers its second-deadliest day with 140 new deaths

Germany has recorded more than 6,000 coronavirus cases in a day for only the second time while another 140 people have died, the latest figures revealed today.

Germany’s mortality rate has also ticked up again, reaching 1.2 per cent – still lower than its major European neighbours, but up from 0.5 per cent a week ago. 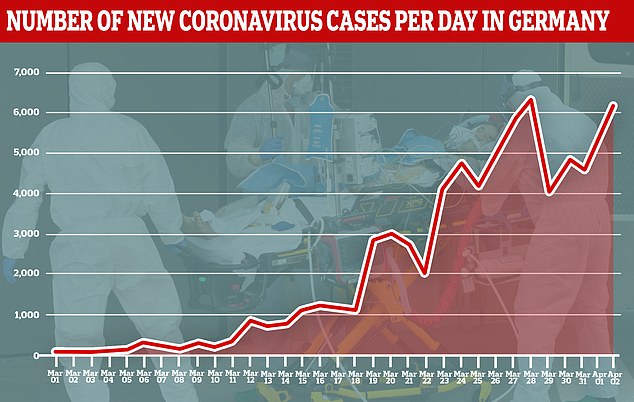 This graph shows the number of coronavirus cases added to Germany’s tally each day. Today’s figure of 6,156 is just the second time the figure has been more than 6,000 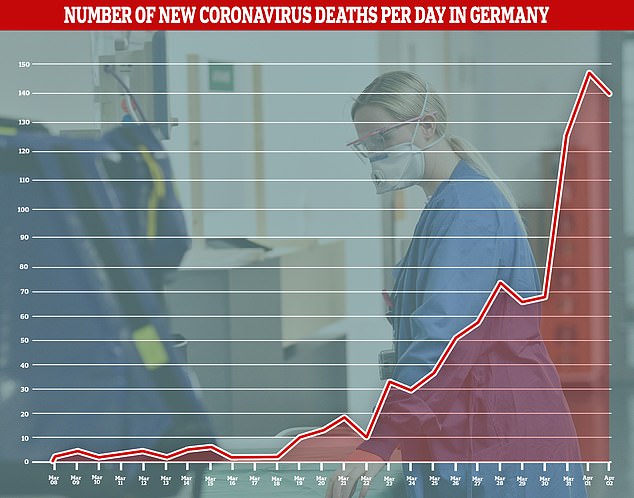 This chart shows the daily number of new deaths. Today’s figure of 140 was down slightly on yesterday’s 149, but is still the second-highest on record

The southern states of Bavaria and Baden-Wuerttemberg – the two closest to Italy – have been especially hard hit, piling up 509 of the 872 deaths between them.

The city of Munich alone – the capital of Bavaria – has recorded nearly 2,900 cases of the disease, according to the Robert Koch Institute which gathers the figures.

There have also been nearly 3,000 cases in Berlin, including 19 deaths, and more than 2,400 infections with 14 deaths in Hamburg.

However, it has increased every day for nearly two weeks, rising from 0.5 per cent just seven days ago.

The low rate is thought to be linked to Germany’s mass testing, which means many people with mild symptoms have been added to the overall count who are likely to have been missed elsewhere.

Germany is already carrying out up to 500,000 tests a week and wants to screen every suspected case of the disease.

By contrast, only 153,000 people have been tested in the UK altogether.

There is also hope that antibody tests which show whether someone has become immune to the disease will be rolled out within weeks. 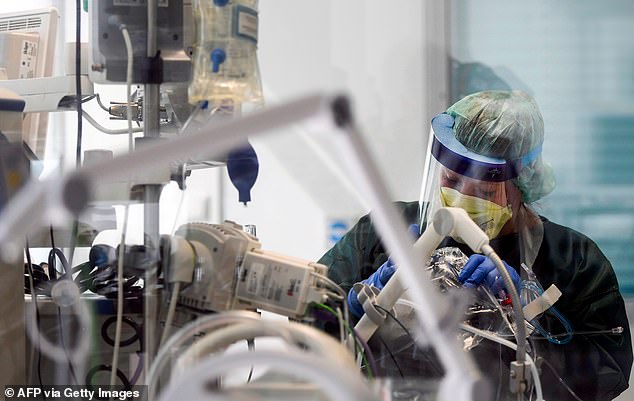 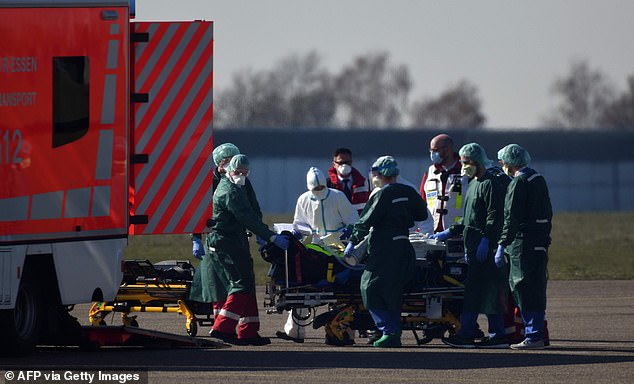 In the meantime, Germany’s current lockdown restrictions will be extended by two weeks until April 19.

‘We assessed the situation today and confirmed that the restrictions… will be valid up to and including April 19,’ chancellor Angela Merkel said yesterday.

‘We will reassess the situation on the Tuesday after Easter,’ Merkel said following a video conference with state premiers.

Merkel acknowledged that the extended lockdown may prevent families from visiting each other over Easter.

But she warned that a ‘pandemic does not recognise holidays’.

The government has repeatedly rejected calls to relax the measures in recent days, with Merkel calling on the public to ‘be patient’ in a podcast last weekend.

On Wednesday, the chancellor reiterated that it was ‘much too early to think about loosening the restrictions’.

‘It would be much worse to do it too early, and we are still very far away from what we need to achieve,’ she said.

Merkel herself has repeatedly tested negative for the virus after going into quarantine when a doctor who recently vaccinated her was found to be infected.

Meanwhile, some officials are looking to South Korea as a model for how to use phone tracking as a tool against the epidemic.

Privacy and surveillance are a sensitive subject in Germany, in a country still traumatised by the memory of the Nazis and more recently the East German Stasi.

An initial proposal to require mobile phone operators to hand over data was dropped after a public outcry.

Nonetheless, even Merkel – who grew up in East Germany – said that if a smartphone app helped to track the virus then ‘I would of course be willing to use it for myself’. 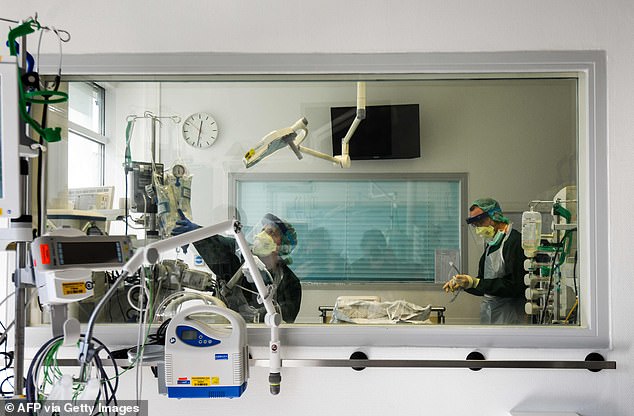 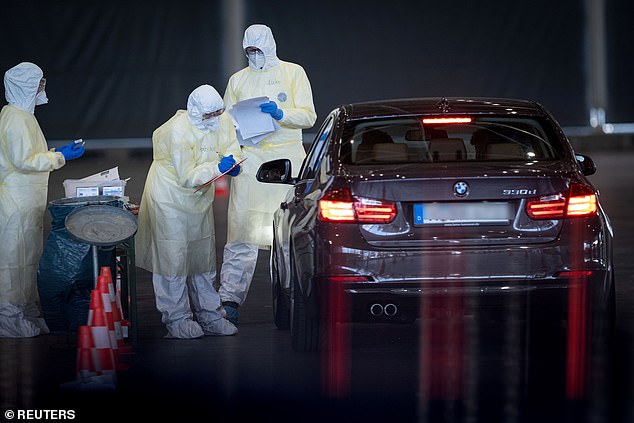 Health minister Jens Spahn said ‘we need to be able to identify and reach anyone who has had contact with an infected person very quickly’ before lockdown measures can be lifted.

Officials will come up with a new plan ‘in the coming days’, according to Spahn, who says ‘the use of mobile phone data will be a key factor against the spread’.

Under the new plans, data will be shared ‘on a voluntary basis’, according to justice minister Christine Lambrecht.

The proposed app would track and record people’s interactions via Bluetooth for two weeks, without tracking their location and with a promise that data will be securely protected.

If a person becomes infected, the app will automatically send a notification to anyone they have crossed paths with in the past two weeks, to warn them of the risk.

Only those who have downloaded the app will receive the infection warnings, and the identity of infected people will be kept secret.

‘HHI is working on an application that will make it possible to record the proximity and duration of contacts between people on mobile phones over the past two weeks, completely anonymously and without the need to record their location,’ a spokeswoman for the company said.

The firsts tests were carried out at an army barracks in Berlin on Wednesday, according to media reports.

Using people’s data in this way also has the approval of Germany’s federal commissioner for data protection, with certain conditions.

‘The collection and evaluation of personal data to interrupt chains of infection can only be carried out with the consent of citizens,’ commissioner Ulrich Kelber said.

‘This data should be stored only for a limited and clearly defined period, and with the sole aim of fighting the pandemic. After that, it should be deleted,’ he said, predicting a ‘strong willingness to participate’ if these conditions are met.