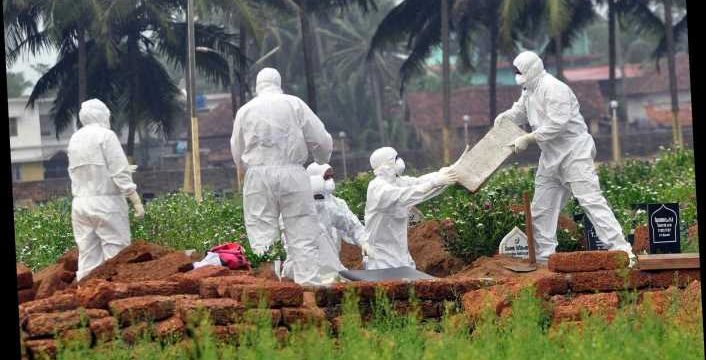 THE WORLD Health Organisation (WHO) has an alert list of diseases which could the biggest threat to mankind as scientists have warned we need to prepare for the "Big One".

WHO chiefs have compiled the list of nine pathogens – which currently includes Covid-19 -which they label "priority diseases" for scientists to develop humanity's defences. 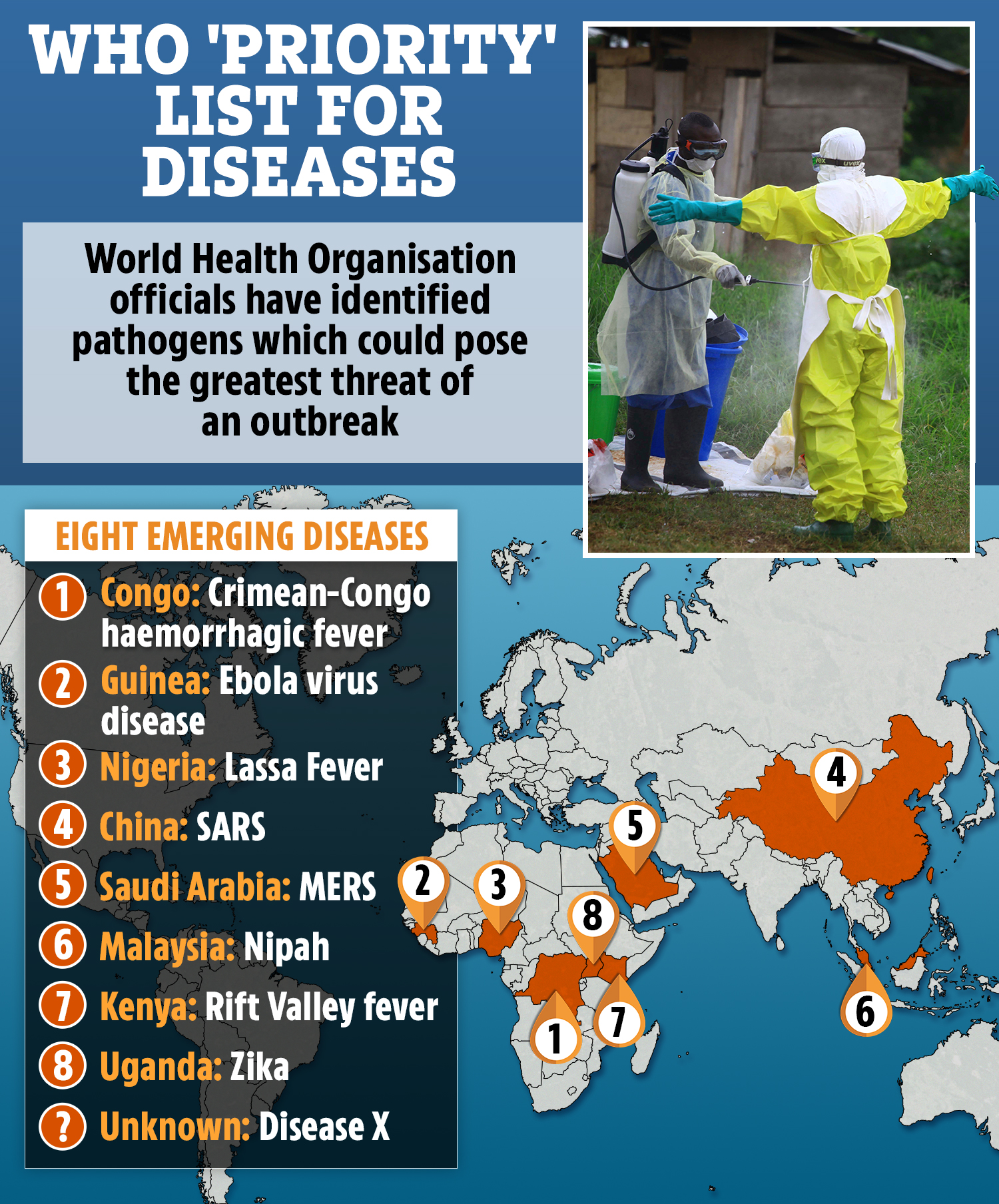 Experts at the transnational medical body describe the diseases as ones which pose the "greatest public health risk" – either due to their "epidemic potential" or the lack of countermeasures against them.

Covid-19 is currently public enemy number one as it continues to ravage the world, so far killing almost 2.5million people and infecting more than 112million.

But the other eight diseases on WHO's list for research and development are also deadly and could pose a major threat unless action is taken against them.

The horror infections can make your brain swell, leave you bleeding out of your eyes, trigger shrunken head birth defects, and or even cause deafness.

The Sun Online previously revealed scientists fear the next pandemic could be worst than the Black Death – that killed 75million people – and mankind may face a health crisis every five years.

Dr Melanie Saville, director of vaccine research and development at CEPI, warned The Sun Online the world needs to be prepared for the next "big one".

And its possible the next big one could be one of these eight diseases, though WHO says its priority alert list is "not exhaustive" and that it regularly updates the list. 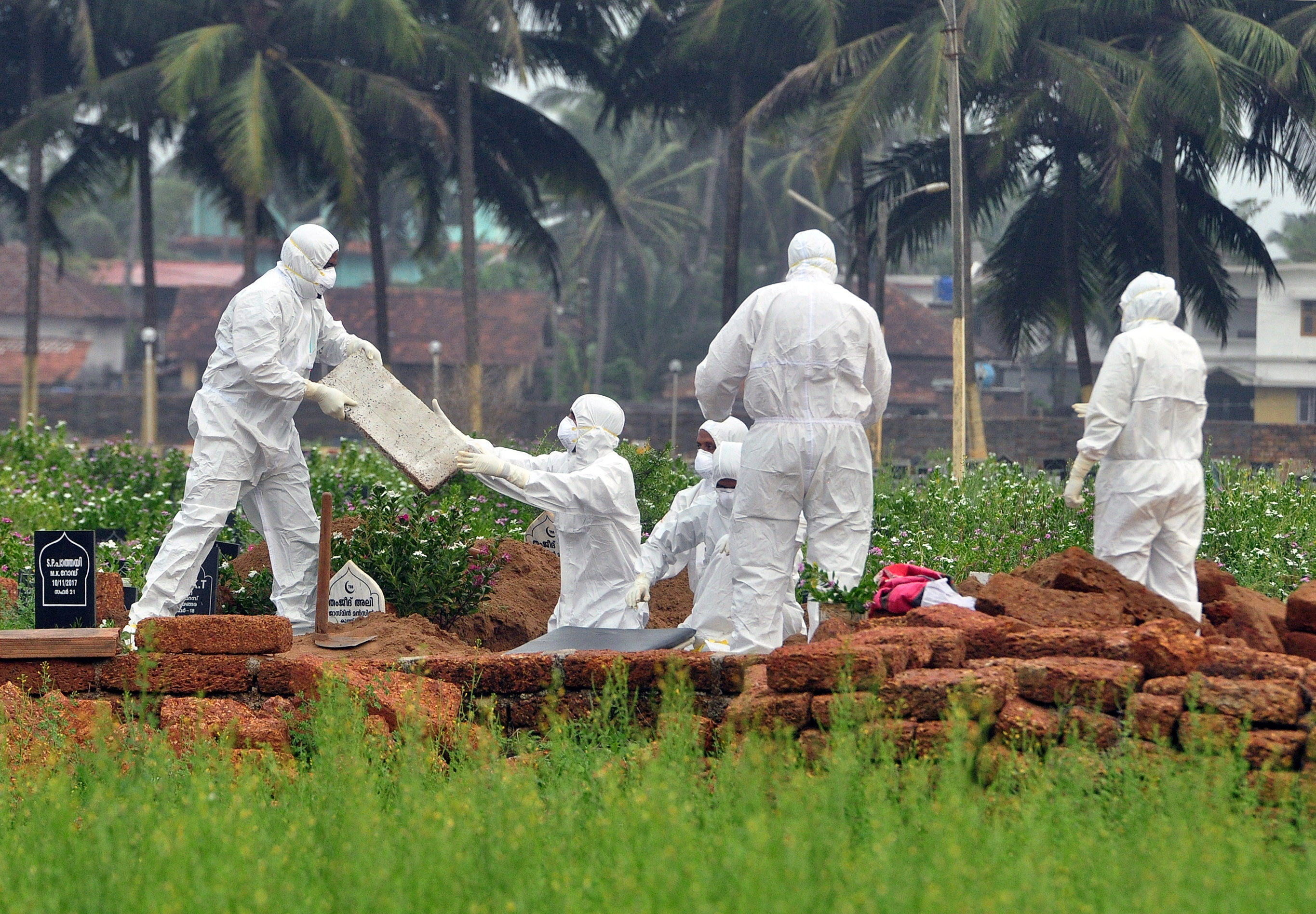 Scientists have identified Nipah as one of the biggest possible threats to become a new pandemic should the virus mutate as its already 75 times more deadly than Covid-19.

The fruit bat-borne virus Nipah causes severe brain swelling, seizures and vomiting after first being discovered in Malaysia in 1998.

Outbreaks show the virus to be extremely deadly, with a death rate of between 40 to 75%.

It is such concern due to its long incubation period of up to 45 days, meaning people could spread for over a month before falling ill, and its ability to cross between species.

Nipah also has an exceptionally high rate of mutation and there are fears a strain more well adapted to human infection could spread rapidly across the the well interconnected countries of South East Asia.

WHO describe the virus as needing "urgent action" as outbreaks in India and Bangladesh have seen "high case fatality". 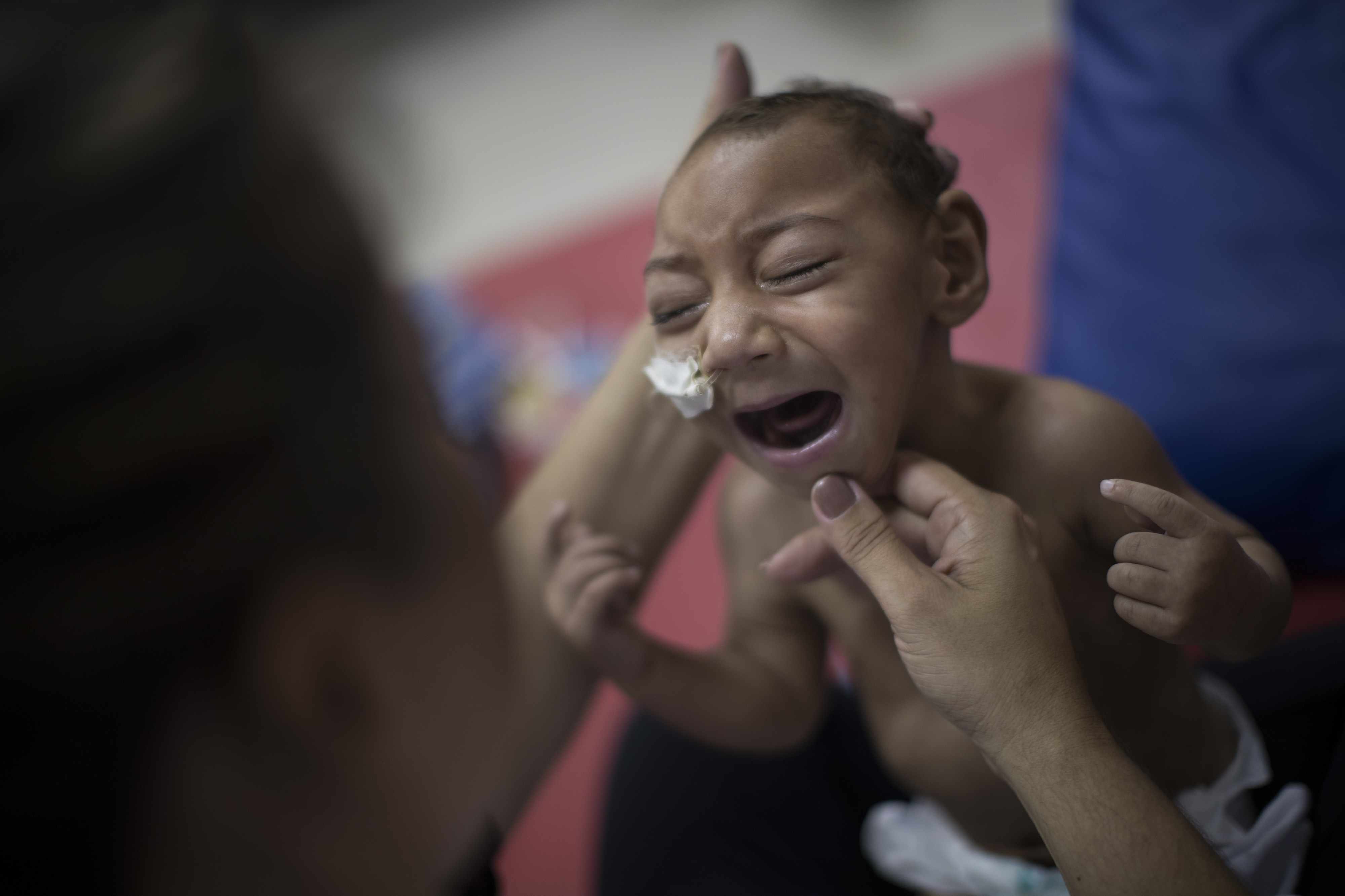 Zika became an epidemic in 2015 and 2016 as it spread across the Americas after the virus first emerged in a forest in Uganda from which it takes its name.

The virus causes fevers, rashes, headaches, and muscle pain – but in its current form it is rarely fatal.

However, its most chilling impact is the effect it has on pregnant women, leading to their children in some cases being born with shrunken heads or other birth defects.

It is believed to have come from monkeys before being transmitted to humans in a spillover event caused by mosquito bites.

The virus can also be spread sexually from men to women – with cases as such being reported in Argentina, Australia, France, Italy, the US and New Zealand.

WHO has helped convene a task force of scientists on Zika and last week released a call for input from experts on how to develop a roadmap to combat the disease. 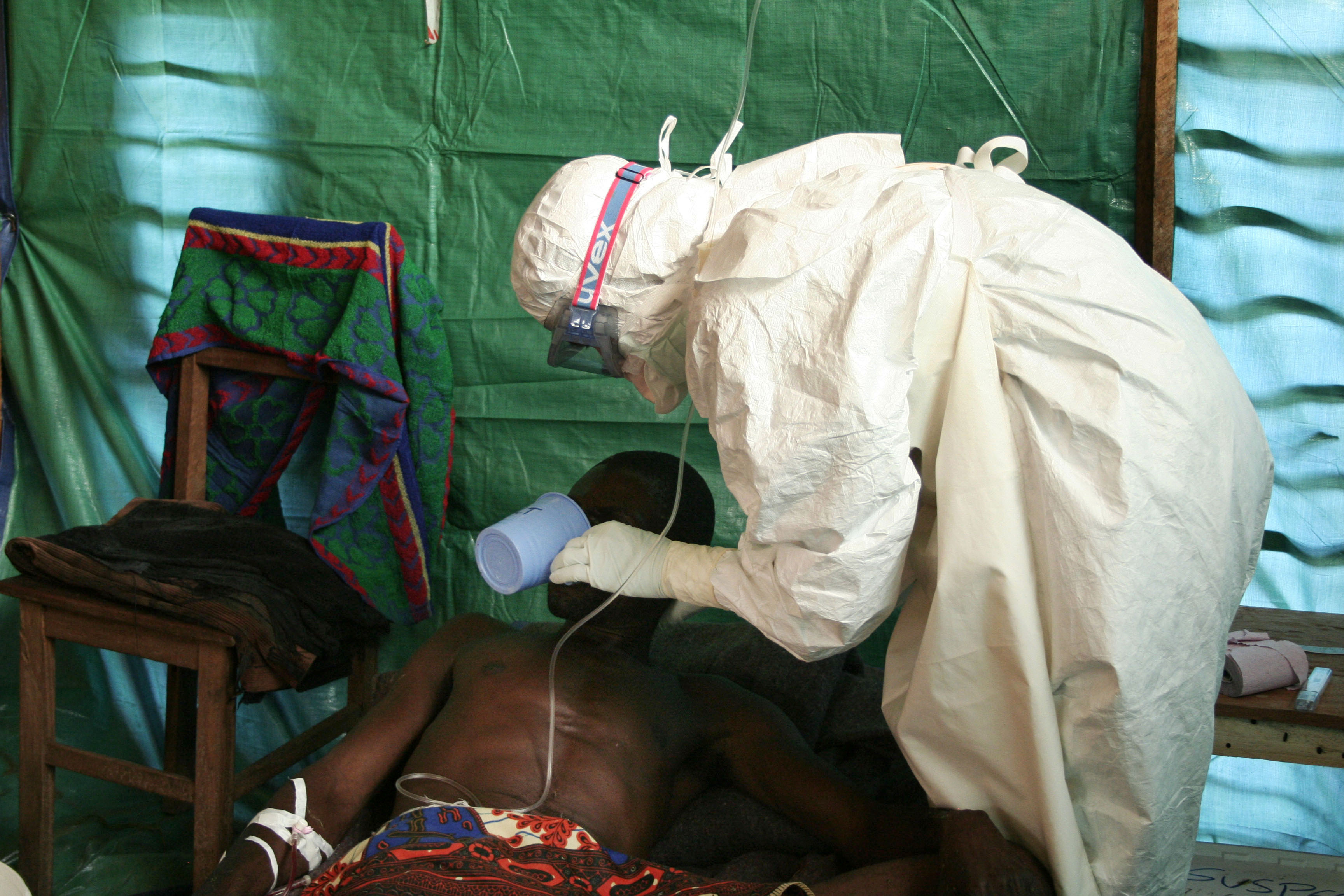 Ebola has reared its head again in 2021 as six African nations have been placed on alert as the White House warned of potentially "catastrophic consequences" for the new outbreak.

The nasty bug can have a fatality rate of up to 90 per cent depending on the strain and can lead to truly horrifying symptoms.

Bleeding out of the eyes, ears, nose and mouth can accompany the infection, along with a fever, headaches and muscle pain.

Guinea has now officially declared that it is dealing with an epidemic as the country fears another resurgence for the bug, which has so far killed three people.

The virus claimed more than 11,300 lives in West Africa when it swept through Guinea, Sierra Leone and Liberia in the 2013-2016 outbreak.

It is thought to come from fruit bats and scientists have so far identified five strains of the virus, four of which can infect humans. 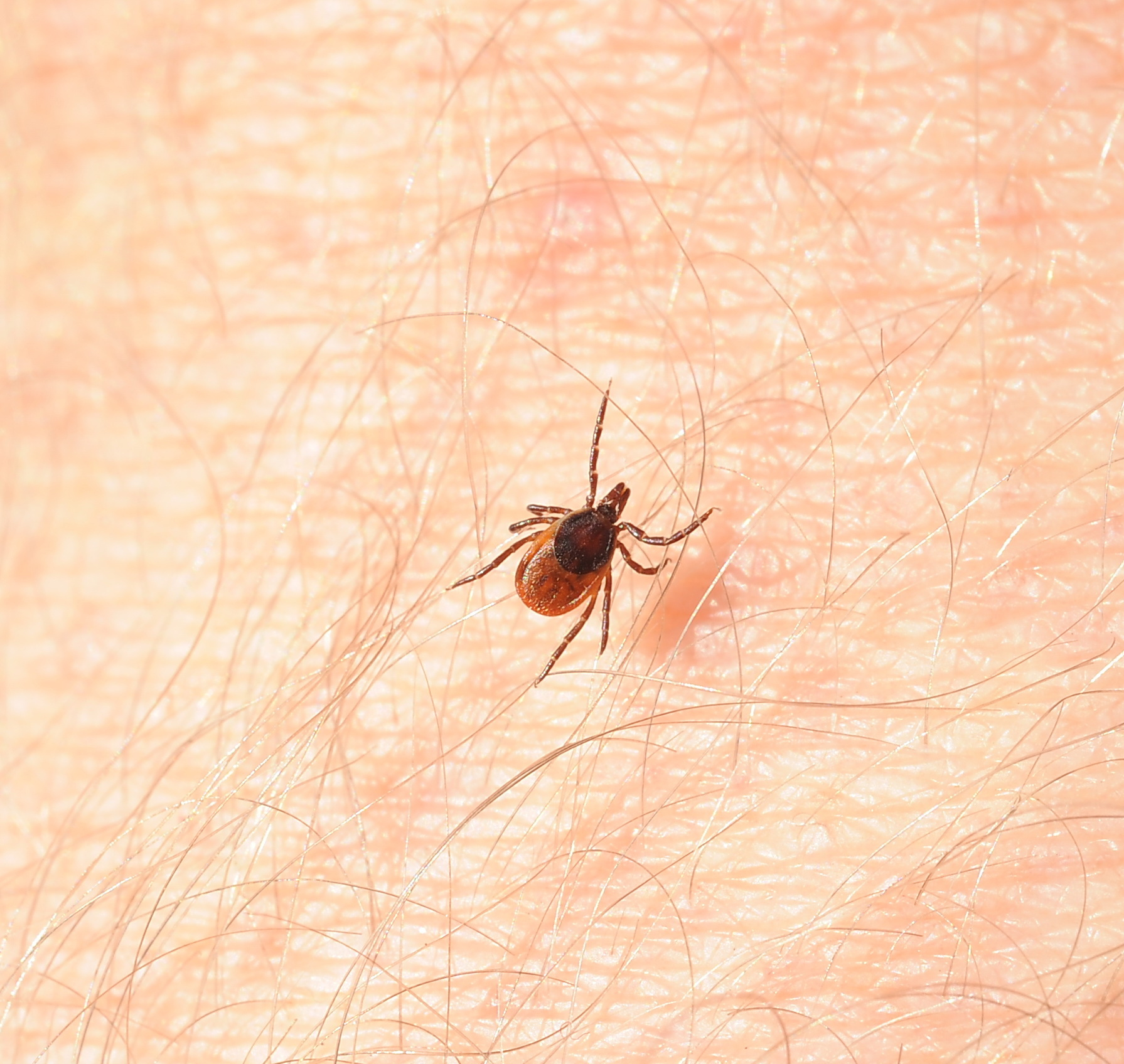 Crimean-Congo haemorrhagic fever (CCHF) is 40 times more fatal than Covid-19 and has been detected in Africa, the Balkans, the Middle East and Asia.

It is believed to be spread to humans by ticks and close contact with livestock or infected meat.

The fever hits quickly and leads to victims vomiting and suffering diarrhoea – sometimes accompanied by dark blotchy rashes caused by bleeding within the skin.

Liver and kidney failure also can accompany the virus which can kill in as little as five days as it burns through victims.

"CCHF outbreaks constitute a threat to public health services as the virus can lead to epidemics, has a high case fatality ratio (10-40%), potentially results in hospital and health facility outbreaks, and is difficult to prevent and treat," WHO said. 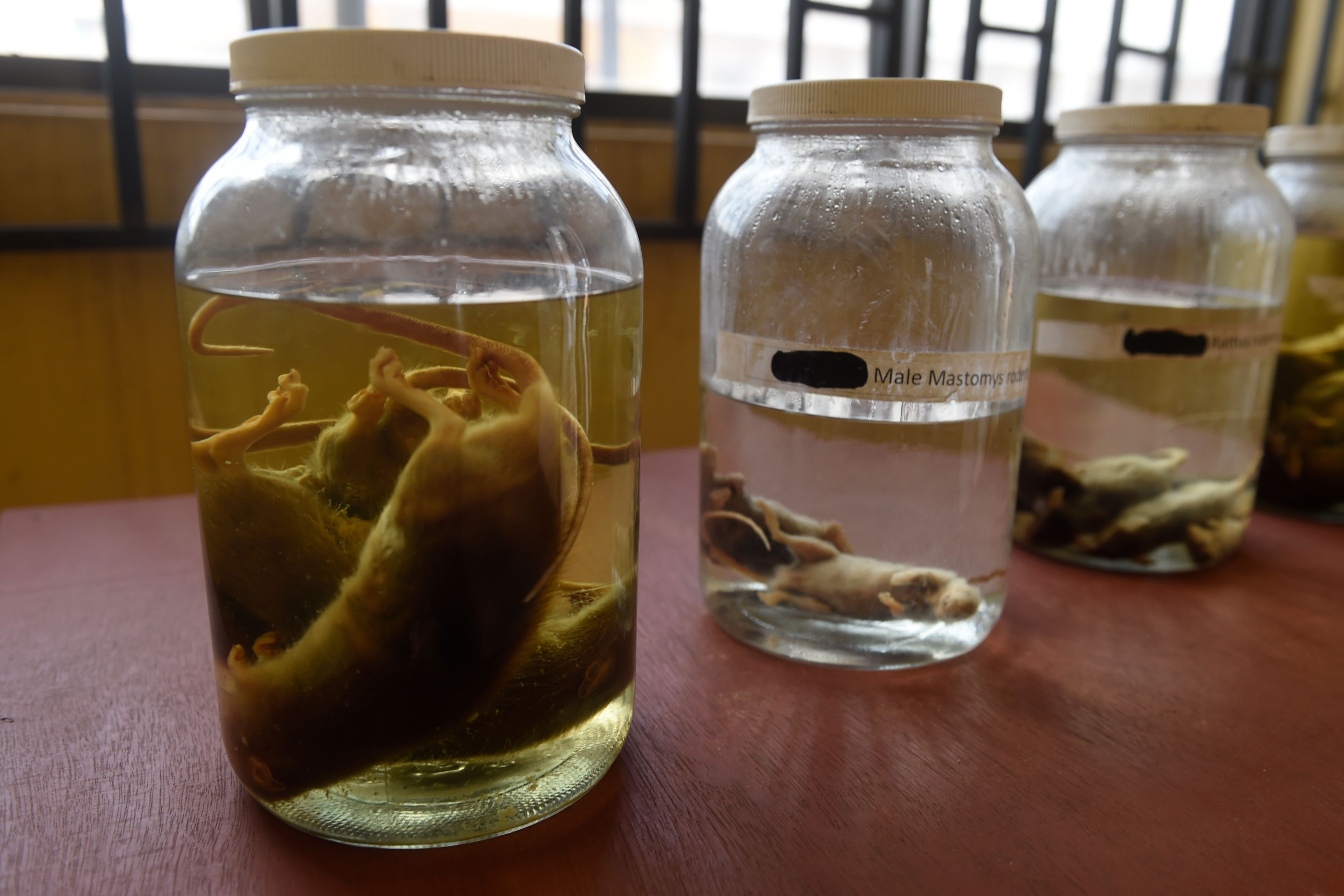 Lassa triggers a fever and can also leading to bleeding gums, low blood pressure, and even hearing loss in its victims.

The virus first emerged in Nigeria in 1969 and is believed to be spread to humans from mice.

It is estimated there are some 5,000 deaths a year from the disease which currently has a fatality rate similar to Covid-19 of one per cent.

WHO also identifies it as needing "urgent action" as they warn of its spread in parts of Africa with hospitals without adequate PPE or disease control measures.

Liberia reported a small outbreak of Lassa fever which killed nine people in 2020. 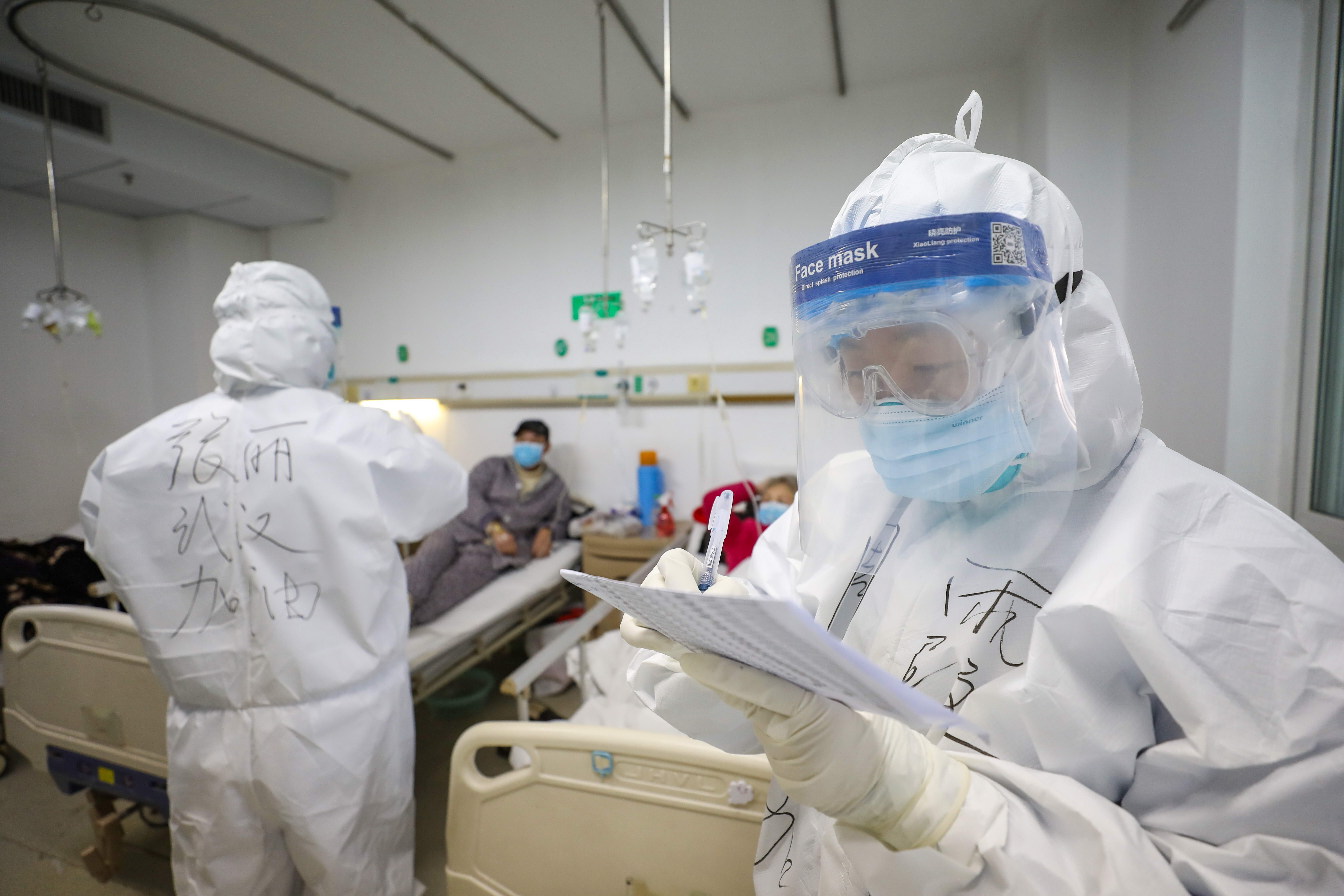 MERS and SARS are lumped in together on the WHO list as they both pose a threat for a possible epidemic.

SARS – like Covid – is also believed to first emerged from bats in China.

And MERS is believed to have spread from bats to camels to humans in the Middle East before first being detected in Saudi Arabia.

WHO warns MERS high case fatality rate and its increasing spread have created an "urgent need" for action against the virus.

SARS meanwhile triggered a global outbreak from 2002 to 2004 as it killed 774 people, and remains a cause for concern for WHO. 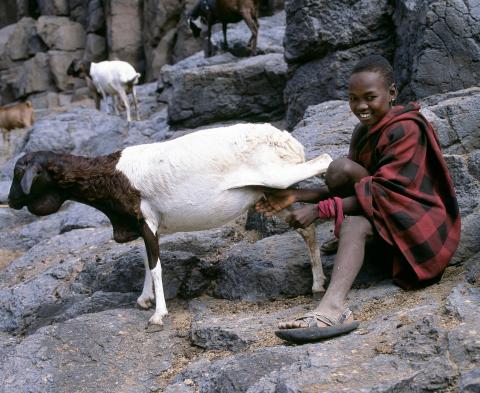 Rift valley fever can infect the brain which leads to severe headaches, confusion and could even trigger blindness.

It also brings with it bleeding and and liver problems as it attacks the human body after being spread through contacts with animals.

The virus takes its name from the place it was found in Kenya after it was found to have infected sheep in 1931.

So far no human-to-human transmission has been detected for the virus.

But it spread outside of Africa for the first time in the year 2000 as it was detected in Saudi Arabia and Yemen. 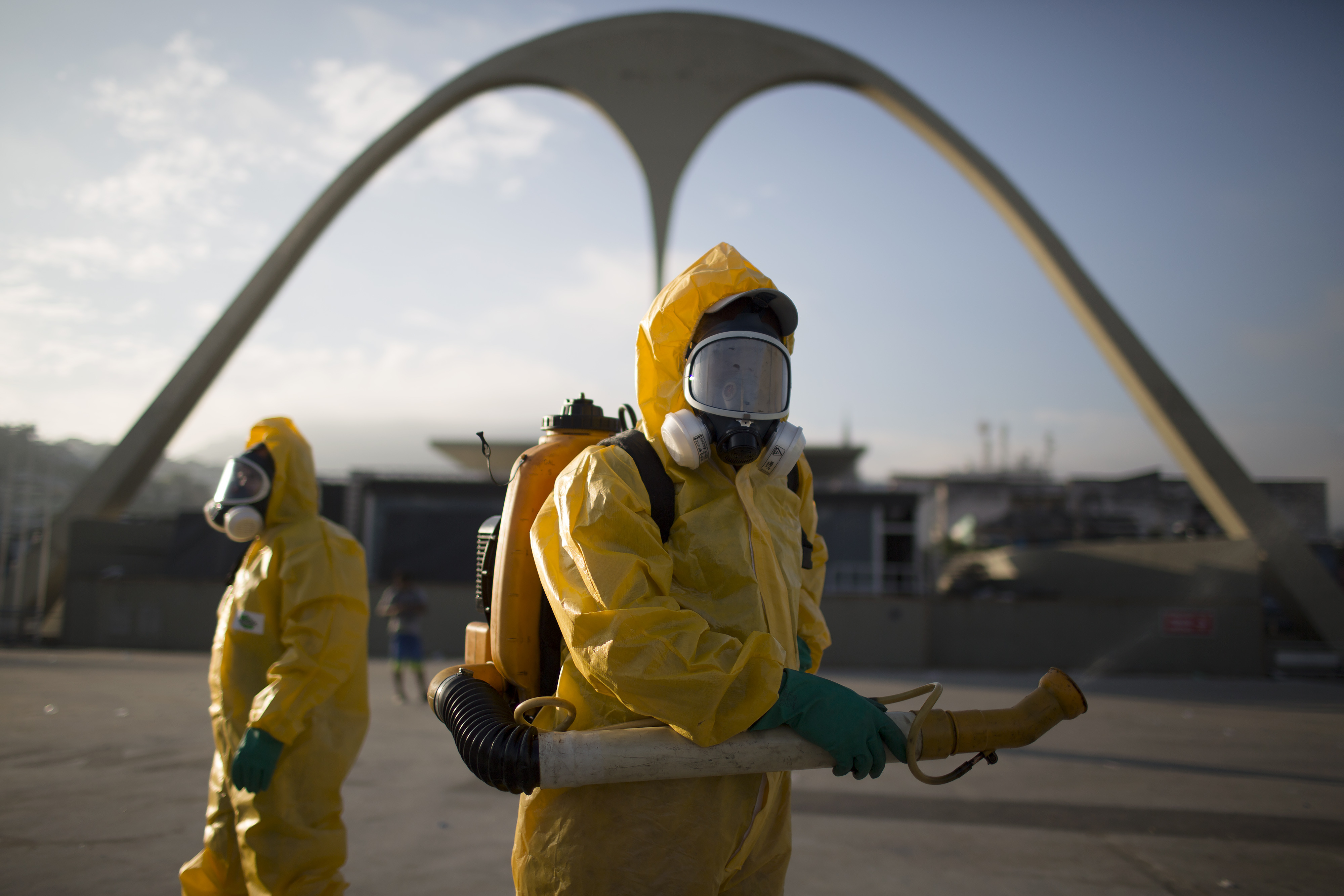 WHO's hidden enemy is the bug which they have branded "Disease X" – which they describe as a "pathogen currently unknown to cause human disease".

Scientists estimate out of the 1.67million unknown viruses on the planet up to 827,000 of these could have the ability to infect people from animals.

It is feared as the human population swells and moves further into animal habitats, the risk of the transmission of diseases to humans grows.

And there have been dozens of examples of diseases crossing from animals to man over the last few decades alone – including Covid-19.

Environmental writer John Vidal, who is working on a book revealing the links between nature and disease, predicted the world faces a new Black Death-scale pandemic.

Given the popularity of air travel and global trade, a virus could rampage across the world, unknowingly spread by asymptomatic carriers, "in a few weeks, killing tens of millions of people before borders could be closed", he adds.

He said: "Mankind has changed its relationship with both wild and farmed animals, destroying their habitats and crowding them together – and the process… is only accelerating.

"If we fail to appreciate the seriousness of the situation, this present pandemic may be only a precursor to something far graver still."