A lawyer acting for former Victorian MP Russell Northe says his client has been assessed by a psychiatrist and is not fit to stand trial over allegations of falsifying expense documents.

Northe, who did not recontest his seat of Morwell at last year’s state election, is facing 45 charges from Victoria’s Independent Broad-based Anti-corruption Commission relating to allegations he falsified financial documents to obtain an audit certificate for office expenses. 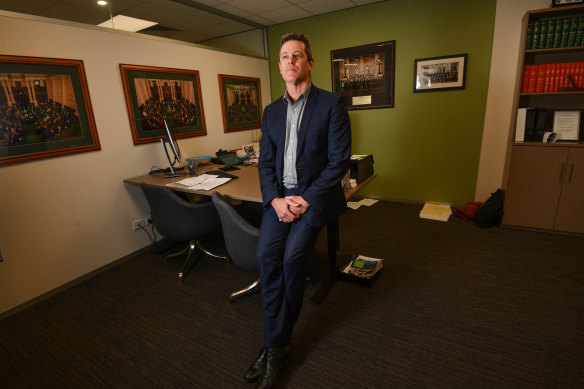 Russell Northe in his electoral office in 2018.Credit:Joe Armao

The retired MP was previously a member of the Nationals but served his last term in parliament as an independent before retiring less than three months ago. The charges relate to his conduct while he was a serving parliamentarian.

He did not attend court on Friday.

His lawyer told Magistrate Andrew Halse in the Latrobe Valley Magistrates’ Court that Melbourne psychiatrist Dr Ajit Emmanuel had completed an assessment of Northe’s mental health and concluded that he was not fit to stand trial.

IBAC investigators allege that in 2019 and 2020 Northe used falsified documents relating to expenses for his office on Kay Street in Traralgon.

According to information filed with the court, the commission alleges Northe produced and used false documents purporting to be from the company Workforce XS Traralgon, a labour hire firm, for expenses worth thousands of dollars for hiring an analyst, an assistant, and to lease a property.

He also allegedly provided false documents relating to the purchase of a $6000 printer and, according to IBAC, provided an audit certificate, obtained through the provision of false documents, to the Victorian Electoral Commission on April 20, 2020.

The court granted Northe an adjournment so he can complete a more extensive mental health report. He is due to appear in court in March.

Depending on the conclusions of the next report, the Victorian Institute of Forensic Mental Health will also complete an assessment. Prosecutors did not oppose the time extension to obtain a more detailed report.

Northe did not respond to a request for comment from The Age on Friday.

He served as opposition spokesman on consumer affairs and liquor and gaming regulation between December 2014 and December 2016.

Before that, he served as the parliamentary secretary for small business and tourism. He was minister for energy and resources for a period in 2014.

In 2017, he announced he was resigning from the Nationals to focus on an ongoing battle with personal demons, including alcohol, gambling and depression. He was re-elected as a “conservative independent” at the 2018 election.

In his valedictory speech to parliament, he called on the new Morwell MP to address issues associated with problem gambling.