Paris: Nicolas Sarkozy could be forced to stand trial after failing in his attempt to quash an inquiry into claims he used Libyan cash for his 2007 election campaign.

The former French president saw a Paris appeals court on Thursday (local time) uphold the validity of the investigation into reports he accepted £45 million ($81 million) from the regime of Muammar Gaddafi. 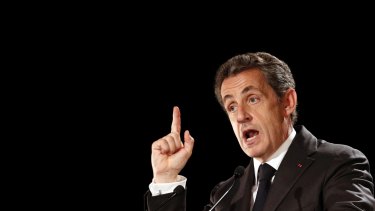 Former French President Nicolas Sarkozy delivers his speech as he runs for the 2017 presidential election, in Franconville, north of Paris.Credit:Christophe Ena

The 65-year-old has denied the allegations but his lawyer would not say if he would appeal against the decision. The failed legal bid means the inquiry by two anti-corruption judges can continue, although it remains to be seen whether they will call for a trial.

The investigation began after Mediapart, a French online investigative journal, published a document in 2012, allegedly signed by Libya's intelligence chief, which appeared to show that Gaddafi had agreed to hand over the cash to Sarkozy.

After Sarkozy was elected in 2007, he received Gaddafi with pomp and ceremony in Paris, but later spearheaded military action against his regime in 2011 which led to the dictator being toppled and killed.

In a more pressing legal headache for Sarkozy, he is accused of using his influence to attempt to bribe a senior judge for information. 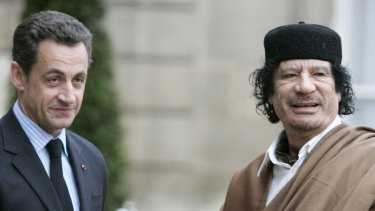 He is to go on trial on October 5, when he will become France's first former president to appear in the dock for corruption while in office. He has protested his innocence.

Sarkozy, who quit politics after a comeback attempt in 2017, has accused judges of a politically-motivated campaign against him.