In Athens, a coronavirus vaccine will help get you into a bar. In Prague, it might win you an iPhone. But in some places, you’ll need it to keep your job.

As governments across Europe push to get everyday life back to normal, the carrot-and-stick approach to inoculations is shifting more to the latter. In France, President Emmanuel Macron pledged a “summer of mobilising for vaccinations,” with compulsory shots for healthcare workers. Italy, Greece and the UK are going down the same road, moving toward making vaccinations a requirement for some.

After months of strife earlier this year over a limited supply of vaccines, European Union leaders now face the opposite problem: plenty of doses, and signs of a slowdown in demand to get them.

The debate is heating up over how hard to nudge Europeans toward getting a shot, pitching authorities into a complicated morass of ethical questions on preventing public harm, consent and privacy.

With the contagious delta variant spreading rapidly, some leaders see a need for tough steps to get past a pandemic that’s killed more than four million people worldwide, and financially and psychologically devastated many more. Others say that forcing people to get shots could backfire and break down public confidence in the inoculation drive.

“We have no intention of going down this road that France has now suggested,” German Chancellor Angela Merkel said this week. “I don’t think that we can win trust by changing what we’ve said before, no compulsory vaccinations.”

Across the EU, about 42% of the population are fully vaccinated. Far higher levels will be necessary to erase concerns about the virus into the colder months of the European winter. In Germany, the RKI public-health institute estimated that 85% of people aged 12 to 59 would need to be vaccinated to reach so-called herd immunity, along with 90% of those over the age of 60.

Meanwhile, loosened restrictions on travel and activity have allowed larger gatherings, feeding a spike in cases among younger people who haven’t yet been vaccinated.

In France, health passes showing proof of testing or immunisation will also be mandatory for theatre, cinemas, sports venues or festivals with an audience of more than 50 people. The edict will be expanded to restaurants in August.

To further push people to vaccinate, Macron will end free tests in the fall for those who want to travel or attend events without getting their shots.

The effect was dramatic: A record 926,000 people made an appointment on Monday via medical booking site DoctoLib. As of Thursday, 2.6 million people had booked a vaccine following the president’s speech, 62% of whom were younger than 35.

But the idea of compulsory vaccines remains controversial. Some medical experts are critical, while French protesters skirmished with police this week in response to Macron’s measures.

“It is the start of a slippery slope,” Allyson Pollock, a clinical professor of public health at the University of Newcastle, said after lawmakers voted to require vaccinations for nursing-home workers in England starting in October. “It overturns 120 years of vaccination legislation and policy which has been built on trust, medical confidentiality and informed consent.” 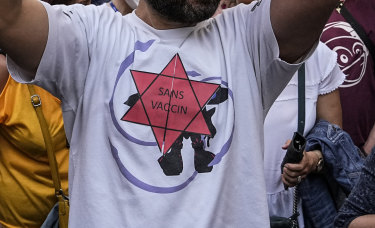 In Italy, coronavirus vaccines have been compulsory for healthcare workers since May. Support there is growing for broader use of the EU digital vaccine certificate, currently only mandatory for big events, some foreign travel and nursing home visits.

Some 68% of Italians would be in favor of allowing only fully vaccinated people to go to restaurants, hotels, cinemas, trains and planes, according to a Euromedia Research poll published in La Stampa newspaper on Thursday. About the same share would back the removal of medical staff who aren’t fully vaccinated by mid-September.

Other countries, including Ireland, are also linking indoor dining with inoculation. Deputy Prime Minister Leo Varadkar acknowledged the plan was “imperfect,” but said it was the best option available.