Floodwaters in Germany and Belgium have killed at least 120 people, with more than 1,000 people missing, as whole communities lay in ruins across both countries.

Record rainfall in Europe has caused tremendous flooding after major rivers burst their banks. Floodwaters have washed away buildings and cars in some cases.

The German military has deployed more than 700 soldiers to assist rescue efforts across the country, with some 4,500 people evacuated in western Germany as officials fear further dam breaches. 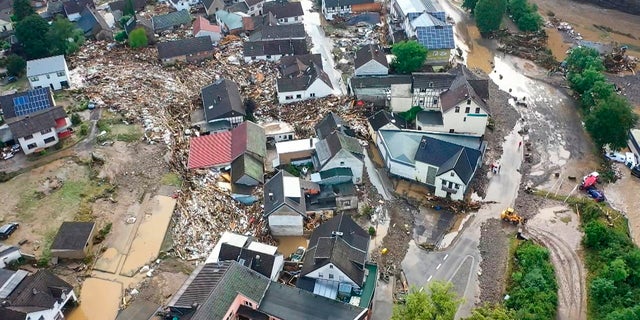 A photo, taken with a drone, shows the devastation caused by the flooding of the Ahr River in the Eifel village of Schuld, western Germany, Thursday, July 15, 2021. (Christoph Reichwein/dpa via AP)

“Some parts of Western Europe…received up to two months of rainfall in the space of two days. What made it worse is that the soils were already saturated by previous rainfall,” said World Meteorological Organization spokesperson Clare Nullis.

German President Frank-Walter Steinmeier said he was “stunned” by the devastation caused by the flooding and pledged support to affected families, cities and towns.

“In the hour of need, our country stands together,” Steinmeier said in a statement Friday afternoon. “It’s important that we show solidarity for those from whom the flood has taken everything.”

County administrator Frank Rock reported that authorities were able to help 50 people evacuate their homes overnight, with another 15 people who still need to be rescued. 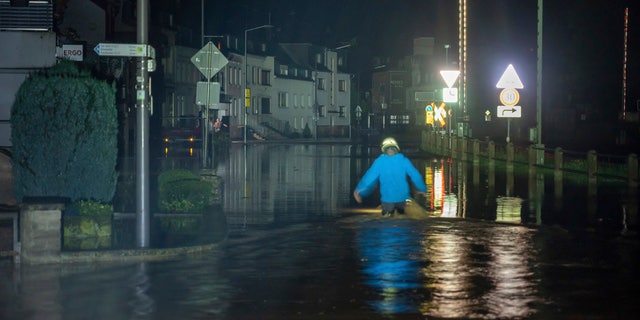 A firefighter wades through a street in Kordel, Germany, which was flooded by the Kyll River, early Thursday, July 15, 2021. Continuous rainfall has flooded numerous villages and cellars in Rhineland-Palatinate, southwestern Germany. (Harald Tittel/dpa ia AP)

“One has to assume that, under the circumstances, some people didn’t manage to escape,” Rock told German broadcaster N-TV. He further claimed that authorities had no precise number for how many died.

Some reports placed the number of missing people at around 1,300, but that number may include duplicated reports or people who cannot be reached due to disrupted road and phone access.

Some 114,000 households in Germany had no power as of Friday morning, and mobile phone networks had collapsed in some regions, Reuters reported.

“The network has completely collapsed,” a spokeswoman for the regional government of Cologne said. “The infrastructure has collapsed. Hospitals can’t take anyone in. Nursing homes had to be evacuated.”

Armin Laschet, the premier of North Rhine-Westphalia, blamed the disaster on global warming, warning that the country can expect “such events over and over.”