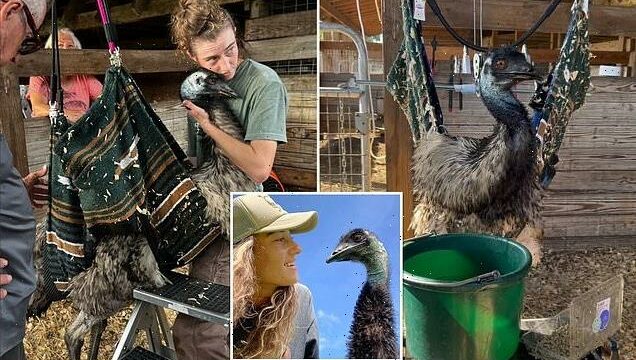 Florida farm owner Taylor Blake has revealed her emu, which shot to fame after being featured in several viral videos she posts to social media, is not dying of avian flu and is just stressed.

Blake recently reached out to Bindi Irwin for help treating her emu, named Emmanuel Todd Lopez, but was refuted as Irwin did not believe she did not have the experience to help.

Luckily, Blake has revealed her emu has tested negative for the killer disease and the symptoms that previously plagued him, which DailyMail.com reported on, ‘all stemmed from stress.’ 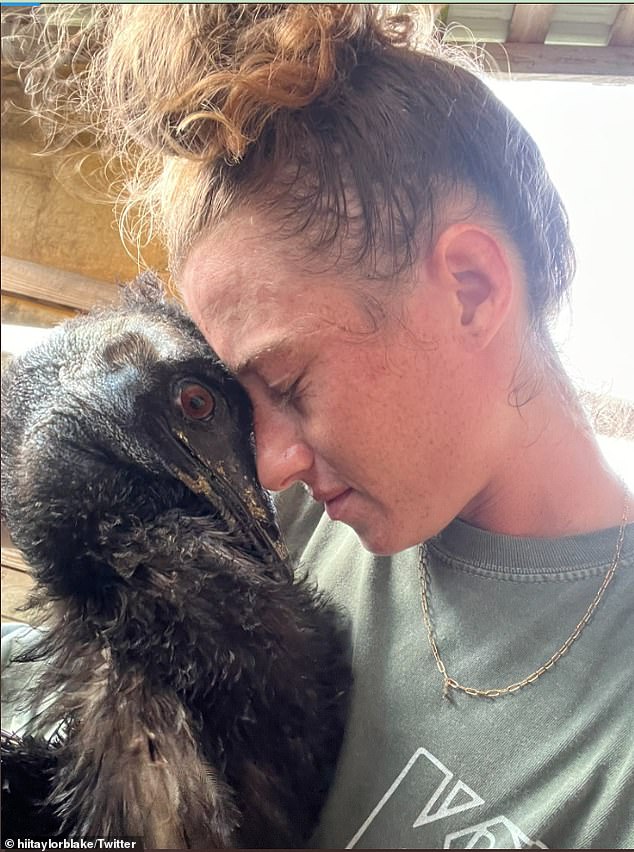 Florida farmer Taylor Blake has been sharing the story of her sick emu Emmanuel on social media, and has revealed he has tested negative for the deadly avian flu 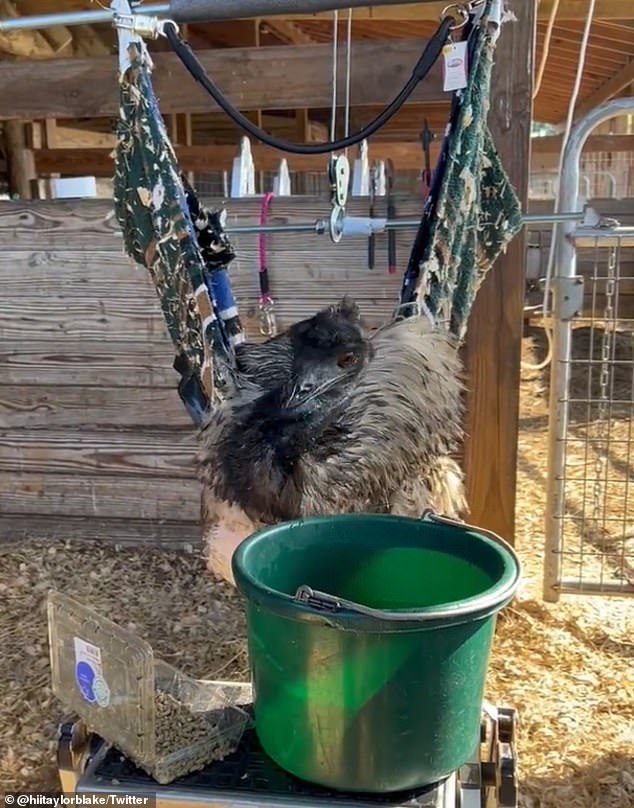 Emmanuel the emu slowly recovered from what his owners now believe was extreme stress, but he was left unable to eat and drink for days 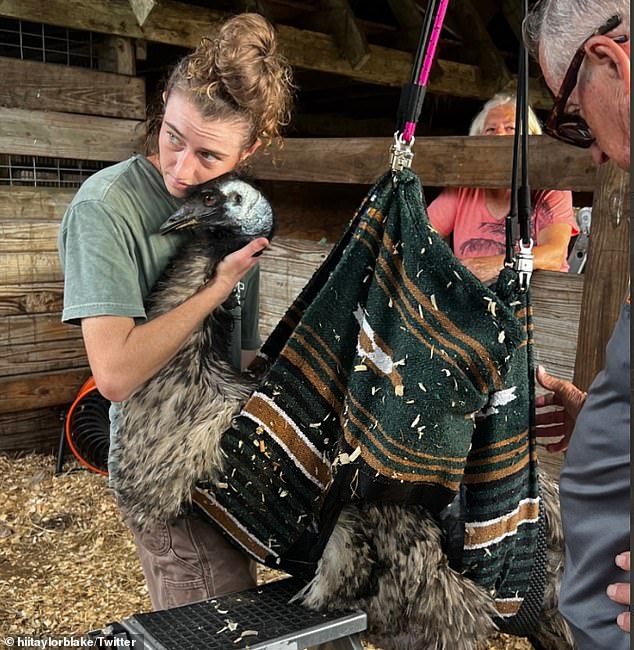 The roughly 5-foot-8, 120-pound emu faces ‘a long road ahead’ to recovery, Blake said, but insists that the lovable animal – who has been left temporarily unable to walk because of his affliction – is a ‘fighter’

‘He doesn’t have the virus, and is not actively shedding the virus. God is good! Thank you for the prayers, the kind words and the support. Always trust your intuition!’

Blake said Emmanuel was ‘incredibly overwhelmed by the state coming in and euthanizing our flock,’ but added the euthanization was ‘necessary,’ but still ‘very stressful on him.’

Earlier this month, she explained she had lost every chicken and duck as well as many geese, turkeys and swans.

The farmer, who owns Knuckle Bump Farms in south Florida, detailed Emmanuel’s issues and where it began to go wrong.

‘He stopped eating the day they depopulated,’ she said.

‘Emus cannot afford to not eat, they rely on proper nutrition. We also did not see him drink, he isolated himself in the farthest corner of the pasture, as far away from the people wearing hazmat suits,’ she continued on Twitter.

After collapsing in the middle of the night because he was ‘so weak and dehydrated,’ Emmanuel panicked and thrashed around for hours.

Though the flightless bird was too dehydrated for the farmers to draw blood, Blake said ‘something in my gut told me this wasn’t the end for him.’

Blake also said her emu ‘never once had a single symptom of AI, other than not eating, which is often caused by stress in emus. It was just very coincidental timing.’

The farmer thanked those who sent ‘positive thoughts, prayers and good energy,’ but also took time to thank those who had less nice things to say.

‘Thank you to those of you who haven’t had anything nice to say, because it forced me deeper into my faith and made me fight even harder for Emmanuel.’

‘He is going to make a full recovery, and I will be with him every step of the way,’ she added.

While it seems the story will have a happy ending for Emmanuel, the emu’s prospects didn’t always look so rosy.

Blake sent a desperate plea to the Irwin clan after she believed Emmanuel had contracted the flu.

‘I have been a fan of your family for as long as I can remember, I am reaching out to you in total desperation right now,’ she tweeted. 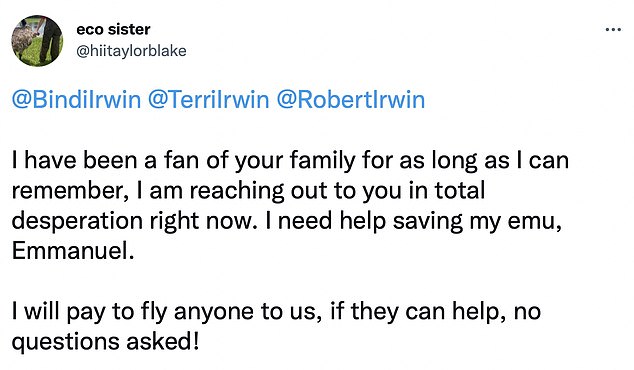 She thought her beloved bird Emmanuel was the latest bird to contract the flu, prompting Taylor to send a desperate plea to the Irwin clan 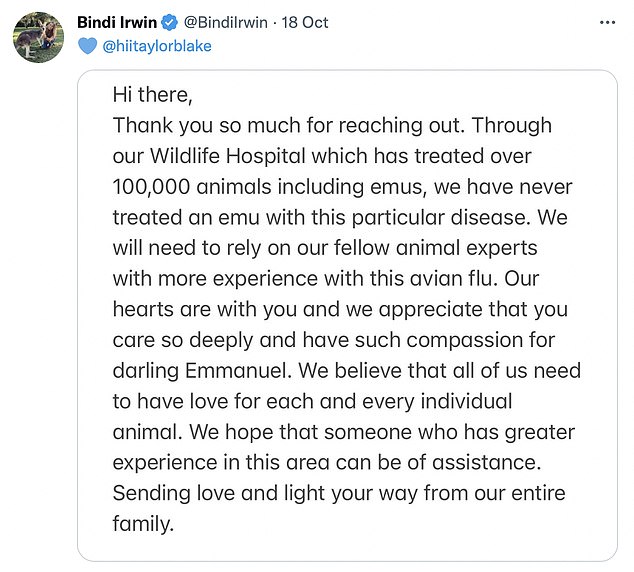 Bindi responded by saying she wasn’t able to provide too much support because the team at the Australia Zoo Wildlife Hospital had never treated birds with avian flu, but did send her ‘love and prayers’ to the farm

‘I need help saving my emu, Emmanuel. I will pay to fly anyone to us, if they can help, no questions asked.’

Bindi Irwin responded: ‘Thank you so much for reaching out.’

‘Though our Wildlife Hospital which has treated over 100,000 animals including emus, we have never treated an emu with this particular disease,’ she added.

‘We will need to rely on our fellow animal experts with more experience with this avian flu.’

Bindi continued: ‘Our hearts are with you and we appreciate that you care so deeply and have such compassion for darling Emmanuel.’