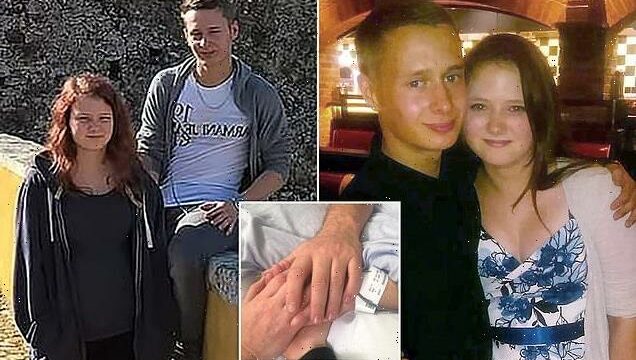 Double tragedy that hit Leah Croucher’s family: Brother Haydon, 24, was found hanged at his flat and died in hospital after struggling to cope with her disappearance

The Croucher family was hit with double tragedy after 19-year-old Leah vanished in Milton Keynes over three and a half years ago.

Leah’s older brother, Haydon, killed himself after telling a therapist he was finding it difficult to cope with his sister’s disappearance and was fixated on hanging himself.

Haydon, 24, was found hanging in his flat in Bletchley, nine months after Leah disappeared, by his mother Tracey Furness and sister Jade. He later died in hospital.

Leah went missing on February 15, 2019. She was last seen walking to work in Milton Keynes that morning. Her parents Claire and John reported her missing after she failed to return home.

Investigators have now launched a murder investigation after finding human remains in their search for Leah, Thames Valley Police confirmed on Wednesday.

The remains were found in a four-bedroom detached property that has been rented out in Loxbeare Drive, in the Furzton area of the city. Leah’s rucksack and personal possessions were also recovered in the home. 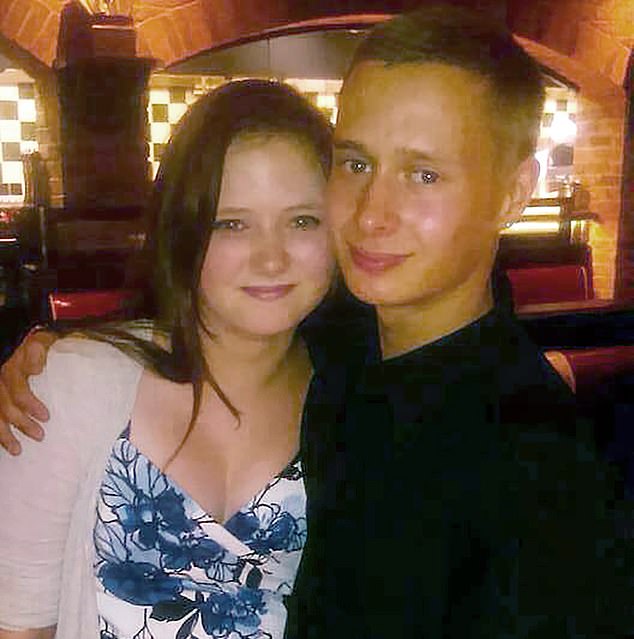 Leah Croucher’s older brother, Haydon, killed himself after telling a therapist he was finding it difficult to cope with his sister’s disappearance. Haydon and Leah are pictured together 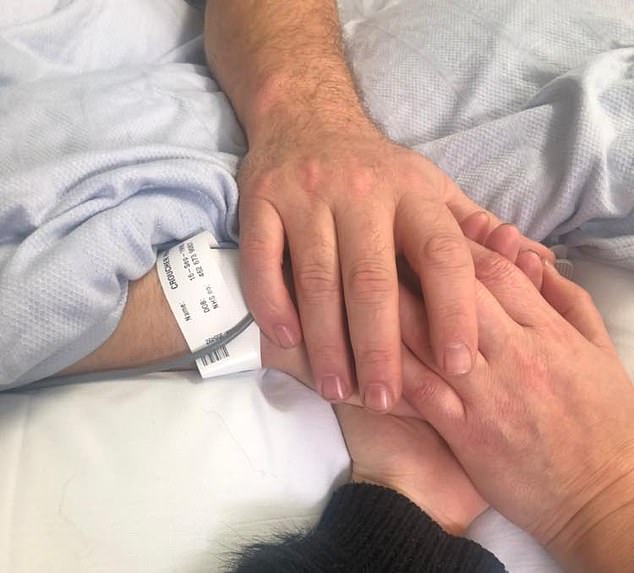 Haydon, 24, was found hanging in his flat in Bletchley, nine months after Leah disappeared. He later died in hospital. Pictured: His family holding his hand as he lay in his hospital bed

Haydon hanged himself after voicing to his therapist that he had been struggling with his sister’s disappearance.

The 24-year-old was brought to Milton Keynes hospital for assessment for admission by his therapist Chantelle Tillison. But there were no beds available and he was sent home.

He was found hanging in his Bletchley flat in November 2019. He was rushed to hospital where he died two days later on November 16, Milton Keynes coroner’s court heard in 2020.

Chantelle Tillison, who was an assistant therapist, told the inquest that at the last of three sessions with Haydon he said he saw no future for himself.

Ms Tillison said: ‘He felt hopeless and said he would be better off dead.

‘He explained Leah was still missing and found it difficult to cope with no family support.

‘He fixated on hanging himself. He said if he had the means to hang himself he would.’

She said she was so concerned she persuaded him to go in her car to Milton Keynes hospital for an assessment for admission.

‘It was evident he was unwell,’ she said.

The inquest heard he was not admitted after saying he did not want to go to a psychiatric bed out of the area, as there were none available locally. A plan was instead agreed for him to stay temporarily at his mother’s home. 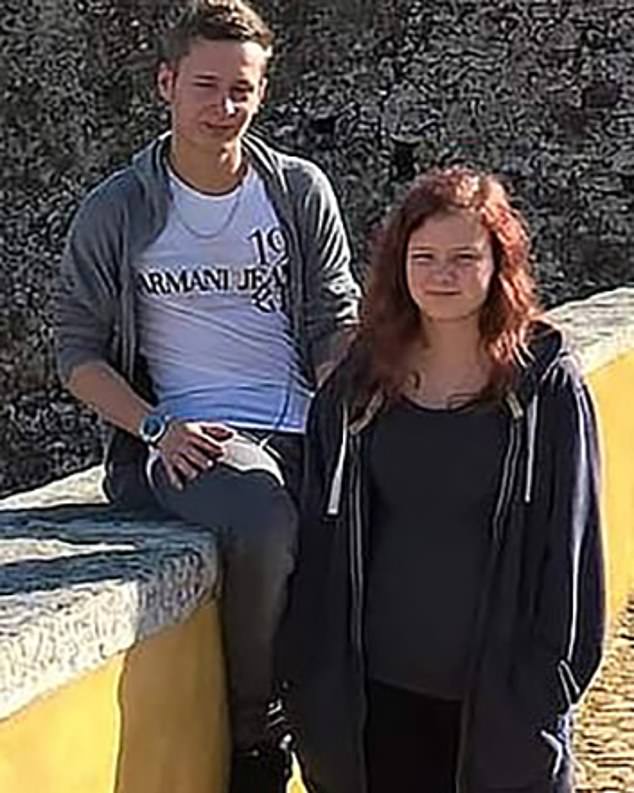 An inquest into his death heard that Haydon told his therapist he ‘felt hopeless and said he would be better off dead.’ Haydon is pictured with Leah 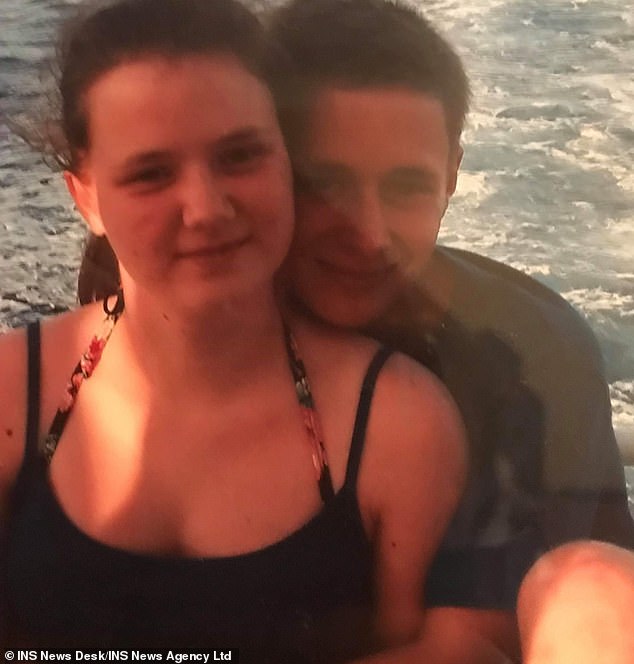 After Haydon’s inquest, his mother Tracey warned there was ‘still a lot to learn’ from the ‘avoidable death of Haydon and others before him.’ Haydon is pictured with Leah 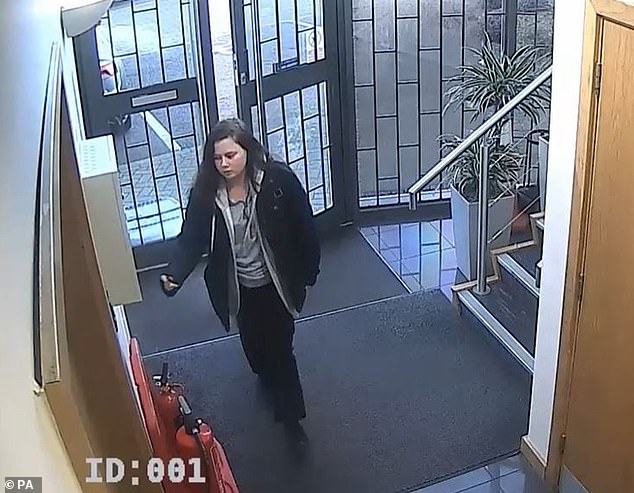 Haydon’s death came nine months after Leah went missing. Leah was spotted walking down Buzzacott Lane in Furzton, Buckinghamshire, while on her way to work on the morning of February 15, 2019 before she ‘vanished into thin air.’ Pictured: Leah Croucher recorded on CCTV shortly before she went missing 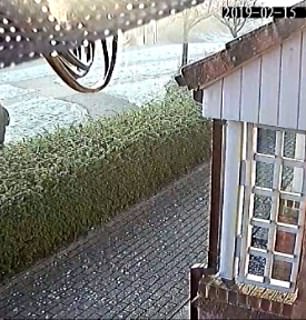 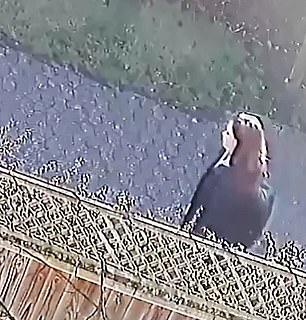 Leah, who was 19 years old at the time of her disappearance, was reported missing from Emerson Valley, Milton Keynes by her family on 15th February 2019. They last saw her at 10pm the day before, 14 February, St Valentine’s Day. Pictured: The last known sighting of Leah on February 15

Dr Jibran Syeed, who was with the home treatment team, said he visited Haydon at home on October 18, 2019.

He said: ‘He (Haydon) had been quite a confident person and outgoing. He mentioned boxing and taekwondo.

‘It was reflected by the medals in his home. Now he had no confidence, no motivation for the future and had thoughts of suicide in the past.’

At their second meeting, on November 8, the doctor said he was more positive and was engaging with his family.

‘He was getting on with certain chores and was trying to find a job. He was active in ideas about what he wanted to do. His suicide risk was lower.’

The doctor stopped his Resperidone – an antipsychotic drug, which is used to affect mood disorder.

The doctor said Haydon had been on the drug since 2014, but there had been times when he had not been taking it.

He said he made the assessment that he should stop taking it because it was a low dose and he was not ‘expressing psychosis.’

The doctor agreed that he did not envisage Haydon being discharged from the home treatment team four days later.

After Haydon’s inquest, his mother Tracey warned there was ‘still a lot to learn’ from her son’s suicide.

In a statement issued through her solicitors, Tracey said in 2020: ‘The family considers the Central and North West London NHS Foundation Trust still have a lot to learn from the avoidable death of Haydon and others before him.’ 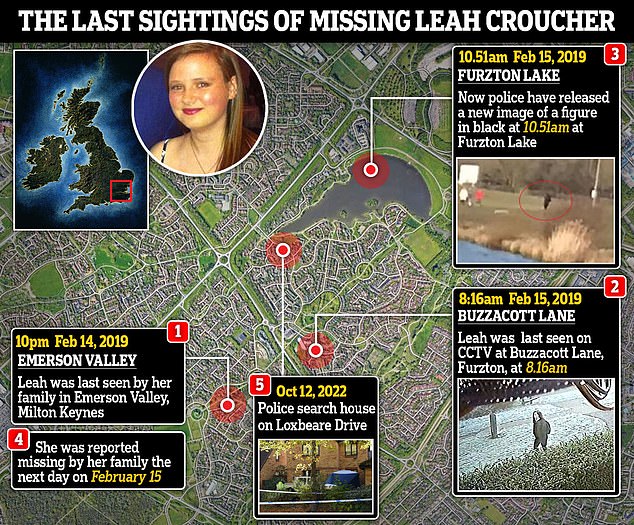 Maps shows house (5) in Loxbeare Drive where police found human remains. It is very close to last known sightings of Leah in Emerson Valley, Buzzacott Lane and at Furston Lake 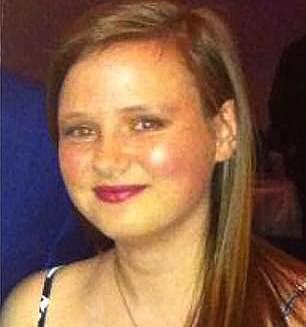 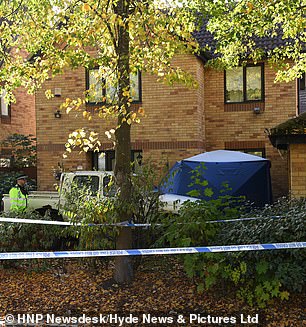 Leah Croucher, 19, (left) vanished in Milton Keynes while walking to work on the morning of February 15, 2019. Thames Valley Police have spent two days searching a house close to where she went missing (right) and have now confirmed that human remains were found at the site 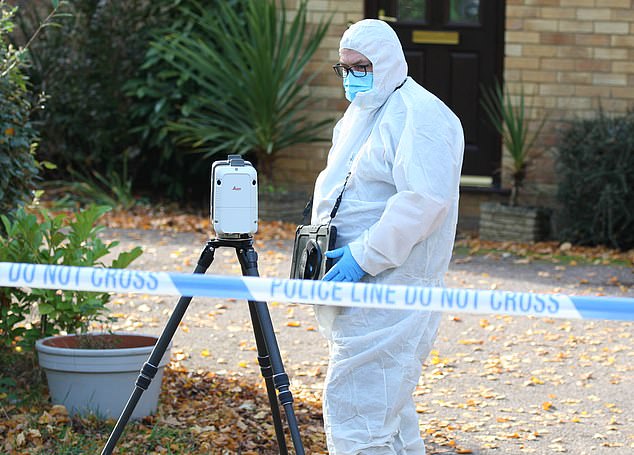 Ever since she disappeared, Leah’s distraught parents and elder sister Jade have done everything possible to keep her in the public eye and step up the campaign to find her.

Since Monday, officers have been searching a four-bedroom detached property in Milton Keynes that has been rented out.

Thames Valley Police confirmed on Wednesday that human remains had been discovered at the site. According to sources, much of the forensic work has been focused on one of the ceilings of the home, which is valued at £490,000.

Wall boards were seen being carried from the property and a blue-coloured forensic tent was erected in the front garden.

‘Following information received from a member of the public on Monday… specialist officers and forensic teams attended the location,’ a Thames Valley Police spokesperson said.

‘As a result of an ongoing detailed forensic search of the property, a number of items have been located.

‘During the search we have found items, including a rucksack and personal possessions belonging to Leah Croucher.

‘As a result of our findings, Thames Valley Police have now launched a murder investigation. This is a complex and challenging scene, which we have been at since just after 6.30pm on Monday.

‘We will continue to be at the scene for a significant period of time.

‘A large-scale missing person investigation has been ongoing for the last three and a half years, with extensive searches and house-to-house enquiries.’

Detective Chief Superintendent Ian Hunter said: ‘Following a call to police on Monday, we attended an address and located items of concern within the property.

‘We are dealing with a very difficult scene but we can now confirm that we have discovered a number of items that are linked to Leah, and as such, we have now launched a murder investigation, led by our Major Crime Unit.

‘Leah’s family have been kept updated and continue to be supported by officers, and we are urging the public and media to think of her family and not to speculate further while this investigation is in the early stages.

‘We will provide further updates when we are able to do so.

‘There remains a scene-watch in place at the address while this investigation continues, and we are committed to ensuring that our enquiries at the scene are thorough.

‘During our search for Leah, we have committed hundreds of officers and staff to the search for Leah over the last three and a half years, reviewing 1,200 hours of CCTV and conducted more than 4,000 house-to-house inquiries and offered several rewards for information to lead us to Leah.

‘The call from the member of the public that we received on Monday was the first occasion that we were alerted to this address, and we thank them for contacting us immediately to report their concerns.

‘Our thoughts remain with Leah’s family and friends, and we will continue to offer them all the support that they need.’ 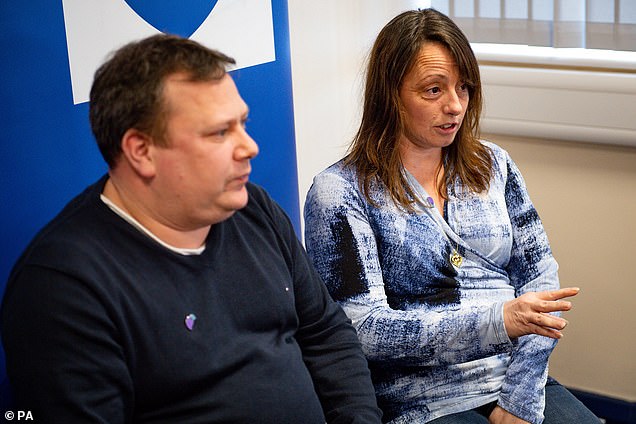 Police say that Leah’s family have been ‘kept updated and continue to be supported by officers.’ Her parents John and Claire are pictured speaking to media at Milton Keynes Police Station in 2020, as they plead for information one year on from her disappearance 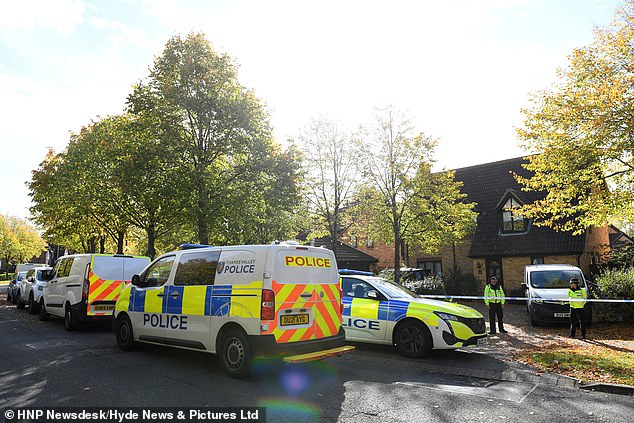 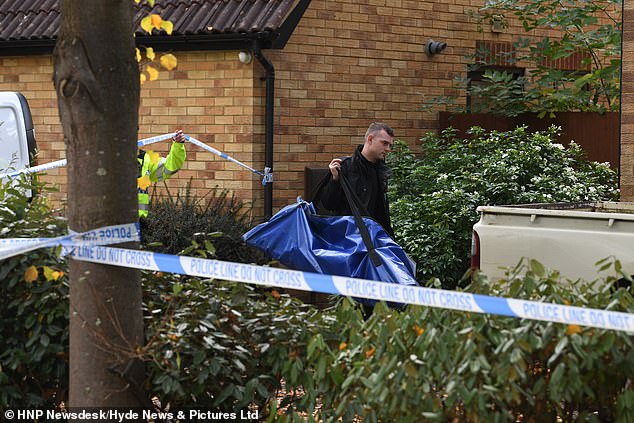 No-one has been charged in relation to Leah’s disappearance, while Thames Valley Police has confirmed on Wednesday that human remains were found 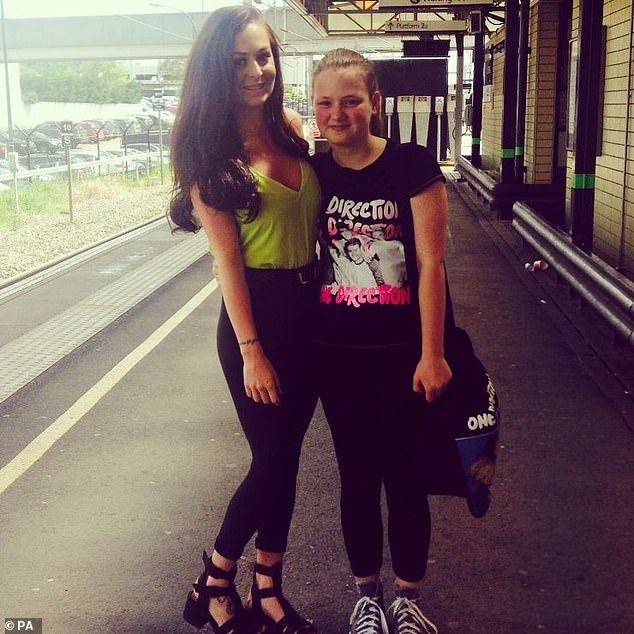 The last reported sighting of Leah was in nearby Buzzacott Lane in Furzton area of the city just after 8.15am on Friday, February 15, 2019.

She was walking in the direction of Loxbeare Drive and Chaffron Way while on her way to work in the morning before she ‘effectively vanished into thin air’.

Despite a wide-scale investigation in which police visited 4,000 properties, sent divers into Furzton Lake and reviewed 1,200 hours of CCTV, no trace of her has been found and no one has been arrested in connection with the case.

Police previously called the case ‘bewildering and frustrating’, and said they retained an ‘open mind’ but ‘the potential that Leah is no longer alive has to increase’.

Detective Chief Inspector Andy Howard said ‘we’ve had no confirmed sightings of Leah’ since the time of her disappearance.

Leah’s parents John and Claire Croucher spoke in February, on the third anniversary she went missing: ‘It has been three long, desolate, years since our beautiful and wonderful daughter Leah, vanished without a trace on her way to work.

‘We still have no answers as to why. No clues as to what happened. No idea as to where or how she is.

‘It is impossible to stay positive after all this time. It was difficult at the start of this but now, the task is so futile, our lives are so bleak. It is harder each day to tell ourselves that today will be the day that we get answers, today we find out what happened three years ago.’

Leah was described by loved ones as ‘very quiet’ and ‘not really an outgoing type of person’, preferring to read fantasy fiction or watch DVDs in her room to nights out at the pub. She had competed internationally in taekwondo but her father said she was ‘not a fighter’.