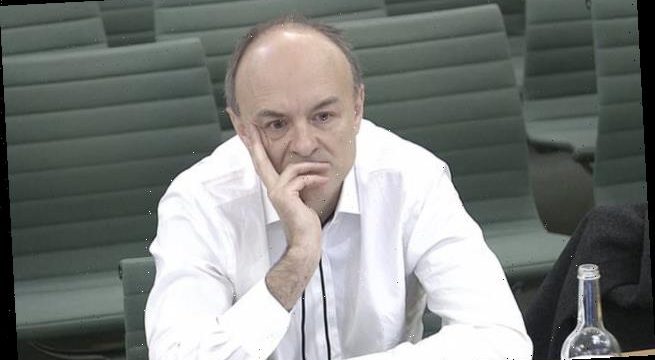 Dominic Cummings was slated by a Labour MP today for mooting a scientist who was forced out of a university post in a ‘eugenics’ row as head of a new UK research agency.

Dawn Butler hit out after the former No10 chief mentioned Stephen Hsu when he was asked at a science committee who should lead the new £800million Advanced Research & Invention Agency (ARIA).

Professor Hsu left his position as Senior Vice President for Research and Innovation at Michigan State University last summer after a campaign by some students and professors.

He had been accused of suggesting there are ‘cognitive differences’ between races, and questioning the value of diversity in recruitment.

In a statement on his blog last June, Professor Hsu flatly denied he was racist or sexist saying he was victim of a ‘Twitter mob’.

‘The attacks attempt to depict me as a racist and sexist, using short video clips out of context, and also by misrepresenting the content of some of my blog posts. A cursory inspection reveals bad faith in their presentation,’ he wrote. 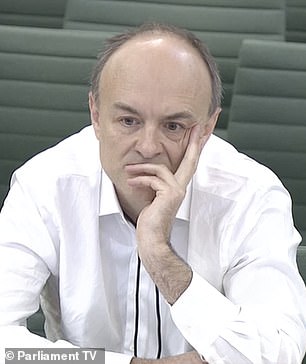 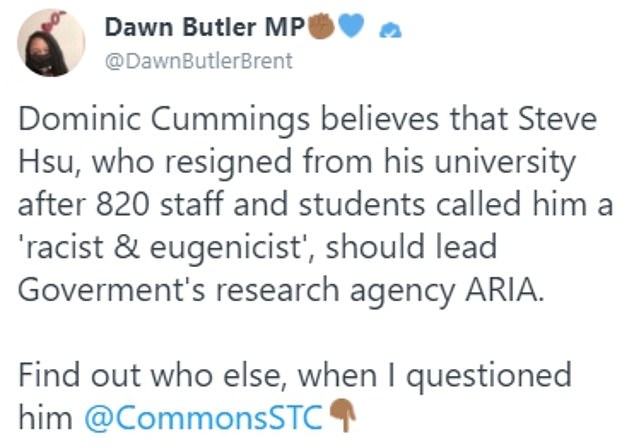 ‘The Twitter mobs want to suppress scientific work that they find objectionable. What is really at stake: academic freedom, open discussion of important ideas, scientific inquiry. All are imperiled and all must be defended.’

Prof Hsu insisted he had always stressed there was no strong evidence of differences in intelligence between races – but had defended the right of researchers to investigate the question.

The scientist has been repeatedly cited in Mr Cummings’ own blogs.

During his evidence to the science committee today, the former Downing Street chief adviser named him as a potential candidate to lead ARIA.

As well as three other possible contenders for the role, Mr Cummings told MPs: ‘Steve Hsu the physicist, who’s also worked in genomics and other things, and also from the startup world. Again, he’s got a a mix of different backgrounds.’

Labour MP Ms Butler tweeted after the exchange: ‘Dominic Cummings believes that Steve Hsu, who resigned from his university after 820 staff and students called him a ”racist & eugenicist”, should lead Goverment’s research agency ARIA.’

Later in the hearing Ms Butler asked Mr Cummings: ‘Do you consider eugenics to be a science and do you think it needs more research?’

Mr Cummings replied: ‘I don’t really know what you mean by by eugenics.

‘There’s obviously a huge amount of work now going on in genomics in understanding how the genome works.

‘There is a huge amount of work happening in genetic engineering and the technologies like CRISPR (a gene editing technique) which have both huge promise and also huge potential disasters.

‘I certainly think that one of Britain’s great scientific advantages is our leadership in this field in genomics, genetic engineering, things like that.

‘That advantage has proved extremely valuable in Covid, because I think we have been one of if not possibly even the leading country in sequencing different variants of Covid.

‘So I strongly think that that fundamental science research should be funded here.’ 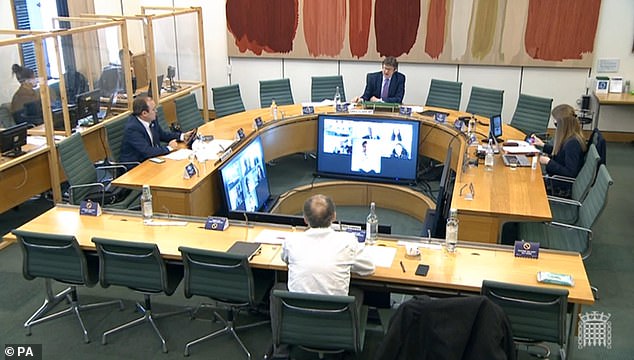