The work is plentiful and so is this year’s bumper fruit crop.

But crunch time is now approaching for Victoria’s growers, with the apple and pear picking season beginning as a shortage of seasonal workers is set to bite. 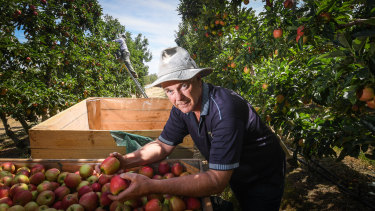 Peter Hall at his property in Toolamba. Credit:Justin McManus

The closure of international borders during the pandemic has wrought havoc for Victorian fruit growers, who depend on thousands of Pacific Islanders each year to pick their produce.

On Friday the Andrews government announced it had struck a deal with Tasmania to allow 1500 Pacific Islanders to work in Victoria, after spending two weeks in quarantine on the Apple Isle.

However, some growers say many more workers – up to 20,000 of them – will be needed, amid growing fears that tonnes of fruit will go to waste for lack of people to pick it.

Growers insist there is money to be made in Victoria’s fruit orchards, but readily acknowledge it is strenuous work for which many people are unsuited.

Although there is a minimum casual hourly rate of $24.80, piecework is also common where workers are paid for each wooden “bin” they fill.

For an industry rife with transient workers, Goulburn Valley fruit grower Peter Hall says he has employed some fruit pickers at his orchards for more than 15 years.

He says efficient and dedicated workers who adapt quickly to the intense physical labour have earned enough to set up their families in Shepparton. 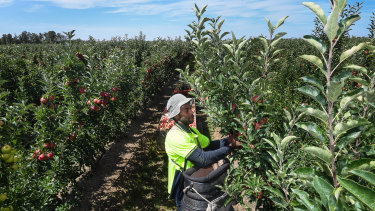 Mr Hall employs a mix of Pacific Islanders, locals and backpackers (under normal circumstances) to pick plums, apples, pears and pomegranate at his orchards, in addition to 20 permanent workers.

During busy periods there may be up to 100 seasonal workers in his business, which stretches across 400 hectares in Toolamba in the Goulburn Valley.

“It’s pretty challenging for someone who hasn’t done physical labour before.“

Mr Hall pays most workers by the hour. But many pickers across the industry are paid by the bin, which holds about 380 kilograms of apples.

About $40 a bin is a typical minimum payment for “size picking” apples in which fruit larger than a specified size is plucked from the trees.

A lower minimum rate may be paid for “strip picking” in which all fruit is taken from the tree regardless of size and colour.

Pay rates vary significantly between different fruit categories and the complexity of the picking job.

Mr Hall, who says he pays more than the typical minimum piecework rate, estimates three to four bins is a normal day’s work but that varies wildly depending on skill level and competent pickers usually ask for a piece rate.

“I have in the same orchard one person who will pick two bins a day and the person beside him will pick eight.“ 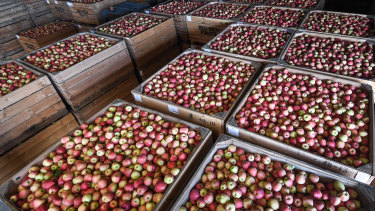 Fresh apples ready to be sold to supermarkets. Credit:Justin McManus

But Mr Hall said he doubted the state government’s plan to allow 1500 Pacific Islanders to work in Victoria would be enough to stop fruit rotting on trees.

“We were looking for about 20,000,” he says. “There will be growers particularly in those peak harvest periods where fruit will not be able to be picked in a marketable condition. It will be left on the tree or drop on its own.”

Victorian Trades Hall secretary Luke Hilakari says farmers have had to resort to foreign seasonal workers because the pay is low and the work can be dangerous.

“The offer that farmers are putting forward is unattractive to most working people,” he says. 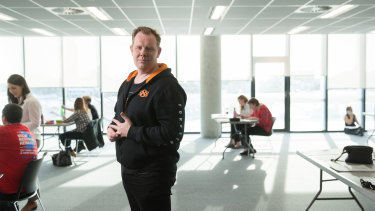 Mr Hilakari says he is aware of one case where a worker earned just $40 a week after paying for accommodation and transport.

Fair Work guidelines specify that the average competent pieceworker must be able to earn at least 15 per cent more than they would on the hourly rate.

The piece rate must be agreed, in theory, between the grower and picker.

The remote nature of the work is another complicating factor, with employees generally required to pay for their own accommodation even if it is supplied onsite, although there is a federal subsidy to cover some costs for Australians.

“There’s a level of certainty that the workers will come back the next day,” he says.

He says many local workers find the job extremely physically taxing – particularly carrying heavy bags of fruit up and down ladders on hot days.

“It’s a job where people have got to be suited to it. You’ve got to be physically fit and prepared to work outdoors.

Rien Silverstein, who grows fruit in Orrvale near Shepparton, insists pickers can earn good money. But she says she had heard of labour hire contractors who house workers in overcrowded conditions, charge exorbitant rents and refuse to pay properly. 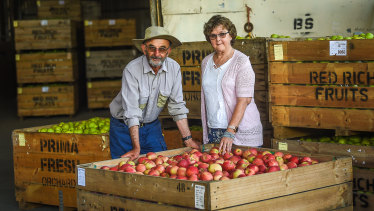 Rien Silverstein with husband Maurice at their farm in Orrvale. Credit:Justin McManus

“It has to be pretty desperate for us to get a contractor,” she says. “We only use bona fide contractors.”

He says he has saved enough money to support his family back home. “Since I’ve been here I’ve started up a milk bar back home, bought a house and extended my house,” he says.

Mr Fetui had planned on returning to Samoa last May but has been unable to get back due to border closures. He has kept working on the Orrvale farm ever since. 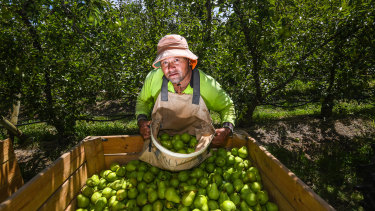 Brighton university student Jake Pudel returned to Melbourne on Wednesday after more than six weeks of fruit picking in the Shepparton region.

He used a contractor to find jobs and worked on about five different farms for the first two weeks, picking apricots and cherries and thinning plum and apple trees.

He considered the experience a “work adventure” but would probably not do it again.

“It was a very valuable experience. As a university student from Melbourne it’s important for us to understand where our fruit comes from.”