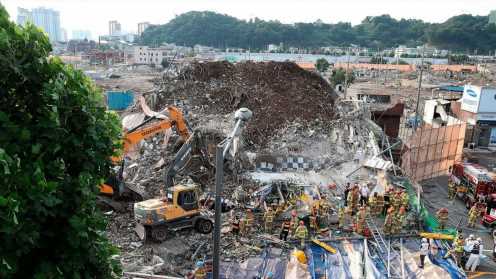 Concrete from the collapsed building in the southern city of Gwangju fell on a bus and two passenger vehicles, the National Fire Agency said.

Emergency officers dispatched to the site rescued the eight people, all seriously injured, it said in a statement.

It didn’t say whether the eight people were inside the bus, the passenger vehicles or the collapsed building. It wasn’t immediately known whether anyone was in the building when it collapsed.

Fire agency officials said they were searching for any other people who might be trapped under the debris.

A video from the scene showed dozens of rescue workers equipped with stretchers and crowbars searching for survivors while excavators hacked at a huge mountain of crumbled concrete and bent steel beams that spilled over a motorway.