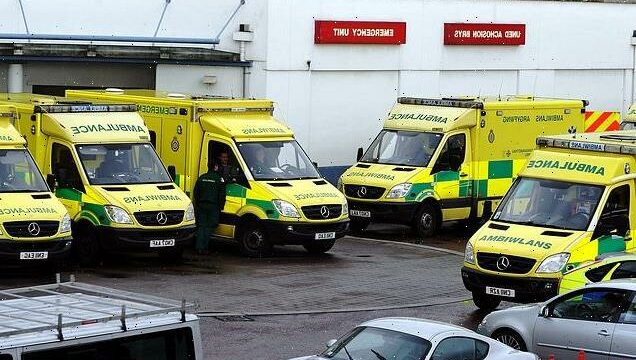 Next week’s ambulance strikes will hurt YOU the most, health chiefs fear: Union bosses are accused of ‘risking people’s lives’ by pushing ahead with 999 walkouts… as patients face waiting WEEKS in pain for operations cancelled by nurses’ strike

NHS chiefs have warned that strikes by ambulance workers next week could put patients’ lives at risk – after walkouts by nurses yesterday led to 70,000 operations being cancelled.

Ambulance trusts have also reportedly told ministers that they will be ‘flying blind’ ahead of next Wednesday’s ambulance strikes after the GMB and Unite unions did not say how many paramedics and ambulance staff will walk out.

‘I think that’s the main thing people are worried about, because of the complexity and fragility of urgent care.’ 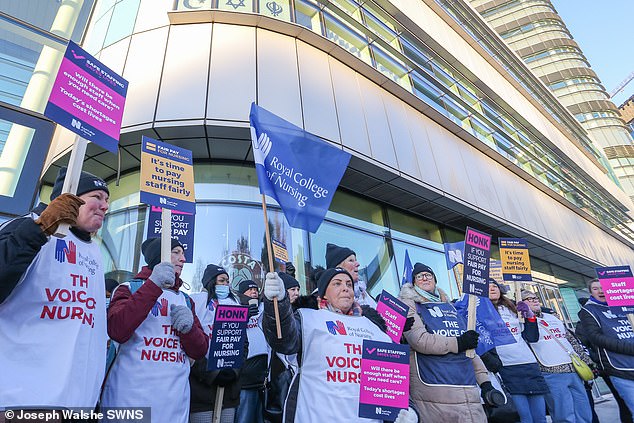 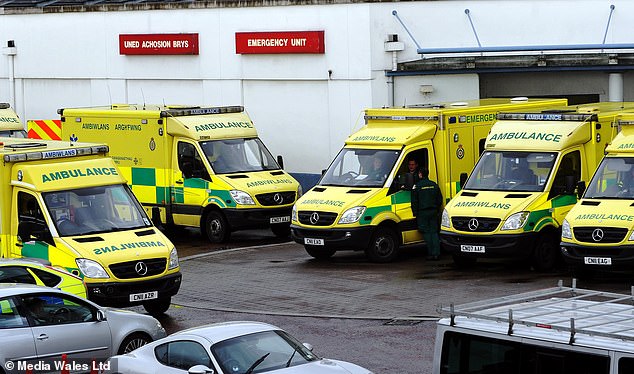 NHS chiefs have warned that strikes by ambulance workers next week could put patients’ lives at risk – after walkouts by nurses yesterday led to 70,000 operations being cancelled (file photo of ambulances outside University Hospital of Wales)

Emergency Cobra planning in Whitehall has reportedly been stalled after concerns that unions were turning down assistance from the Army to fill-in for striking ambulance staff, the Sun reports.

A source told the paper that unions were keeping NHS trusts ‘in the dark’ by not revealing how many of their members will be striking when paramedics, emergency care assistants, call handlers and other staff walk out on December 21 and 28.

They said that this frustrated efforts to minimise the impact of strikes on patients.

Ambulance workers rejected a pay rise of four per cent which was offered by the government, as it it was well below rates of soaring inflation making it a real terms pay cut.

Only one ambulance trust in England has negotiated a minimum level of service during strike days.

The South East Coast Ambulance Service agreed a deal that all category one calls – which are immediately life-threatening emergencies – will be answered even if staff have to stop striking temporarily.

But the ambulance service added: ‘Anyone not facing a life-threatening emergency is likely to wait longer for a response or be directed to alternative care.’

Matthew Taylor, chief executive of the NHS Confederation, which represents health organisations, also warned that the Government must act to prevent future strikes.

He said: ‘The Government cannot just sit back and let future strikes happen when patient care is on the line.

‘The worry is that this is just the start, that strikes possibly being planned for January could be more severe and co-ordinated across the different unions, and that we could be in a position of stalemate for the foreseeable future.

‘This benefits no-one and the Government must act.’ 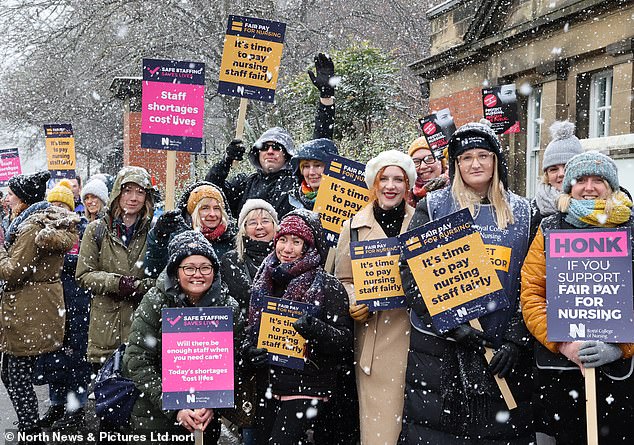 Sara Gorton, head of health at Unison, whose ambulance members are set to strike, said: ‘There’s no need to start another long-winded evidence round. A wage boost is needed now, not months down the line.’

Cancer patients were among those denied care yesterday as tens of thousands of nurses took industrial action that reduced hospitals to a Christmas Day service.

The Royal College of Nursing called the first national strike in its 106-year history after the Government refused to cave in to demands for a 19.2 per cent pay rise.

But Health minister Maria Caulfield stood by the decision to award nurses a four per cent rise, as recommended by the NHS pay review body.

Former Health Secretary Sajid Javid told the body in his remit letter last year: ‘As the NHS budget has already been set until 2024 to 2025, it is vital that planned workforce growth is affordable and within the budgets set.’ 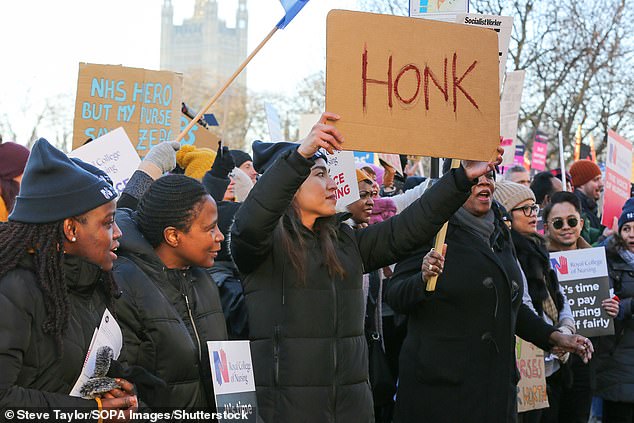 A NHS nurse holds a placard during a protest outside St. Thomas’ Hospital in central London on day one of the two strikes taking place this month

It came as furious patients complained about urgent operations being cancelled at the last minute. Heather Smith, 75, was due to have a pre-operative injection at Queen Elizabeth Hospital in Birmingham on Wednesday, followed by a lumpectomy – the removal of abnormal tissue – at Solihull Hospital yesterday.

But she and her husband Nick, of Walmley in Sutton Coldfield, were told both procedures were being postponed because of the industrial action.

Mr Smith said: ‘My wife is distraught. We were called at 10.10am on Wednesday to say everything was cancelled. We had our coats on to go to the QE. Now this has been cancelled, she could lose her breast. We don’t know now when this will go ahead.’

Mr Brine said it would be a good idea to ask the independent panel to review its advice, which was given before inflation surged amid the war in Ukraine. ‘Everyone needs to cool it and I think sending it back to the pay review body to have a look would be a sensible answer,’ he told the BBC’s World At One Programme.

He suggested this would be a way for the RCN to step back from its second day of strikes, planned for next Tuesday.

Sir Jake said the Government is ‘going to have to improve its offer’. He told Talk TV: ‘We need to find a way as a Government, and the union does too, to get to that centre point, that point of agreement straight away.’

But Health Secretary Steve Barclay appeared to rule out any movement during a visit to Chelsea and Westminster Hospital.

Pressed on whether he is willing to discuss pay with the RCN, he said: ‘We’ve been clear that we have an independent process and that is the process we followed.’

Last night, Pat Cullen, Chief Executive of the Royal College of Nursing said: ‘Today will be a turning point in the campaign for fair nursing pay. At the end of it, ministers find themselves under fresh pressure from unexpected places – their own MPs, NHS leaders and a former chair of the Pay Review Body.’

The RCN has been calling for a pay rise at 5 per cent above the RPI measure of inflation, which was running at 7.5 per cent when it submitted its request to the pay review board in March.

But inflation has since soared, with RPI standing at 14.2 per cent in September. Ms Caulfield told Sky News: ‘Cancer surgeries are going to be closed in 44 trusts in England. We reckon it’s about 70,000 appointments, procedures, surgeries that will be lost.’

Nurses braving the cold on picket lines yesterday said they had no choice but to go on strike. Yoga Sundaram, 28, who works at the Queen’s Medical Centre in Nottingham, said: ‘Most of us are having to work an extra shift on top of our basic 37.5 hours a week, just to pay the bills. That extra money does not go towards savings or holidays, it’s just to keep our heads above the surface.’

Occupational health nurse Shan Robinson, 53, of Addenbrooke’s Hospital in Cambridge – where 2,000 appointments were abandoned due to the walkout – said: ‘We don’t really have much option other than going on strike.

‘We are understaffed because we are losing so many nurses and one of the reasons is low pay.’