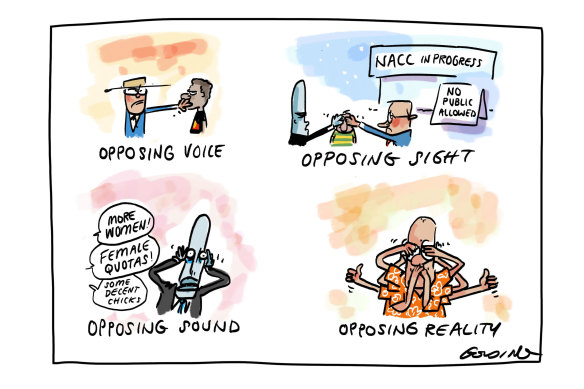 Graham Arnold is the new Johnny Warren. A boy born in the Australia of football ridicule, but who found this was his game. Back then, it was mainly migrant communities that held the sport together and Graham fell in with Sydney’s Croatian community and learnt the beauty of both the game and another way of living.

Like Johnny Warren, Graham is always working to teach the Australian sporting community about the wonder of the round ball. Although the theatre and drama of this World Cup has made that so much easier. Graham deserves the credit of the nation, something he has seldom received.
Alan Contini, North Carlton

As a photographer and portrait painter, I was bemused by your correspondent’s suggestion (3/12) that photographs, rather than oil paintings, of prime ministers would do for Parliament House. Photographers also have to be paid handsomely for interpretations of sitters. However, oil on canvas endures though given recent events, the people might enjoy seeing commissions go to Bald Archy satirical portrait-prize winners.
Frances Henke, Hastings

In 2017, I had a urinary tract infection that was resistant to the first line of antibiotics I was prescribed, leading to infection of my bladder, kidneys and blood (septicaemia), a life-threatening condition for which I spent over a week in hospital. I was considered lucky to get away so lightly. Will a pharmacist (Letters, 3/12) with no knowledge of my medical history address the next UTI I have appropriately? Will a urine test be sought to determine antibiotic resistance?

Too often, the symptoms of UTIs, which are more prevalent in women, are ignored. Young women are not educated about the potential severity of UTIs, nor young men about the dangers of passing on this bacterial infection to sexual partners. Similarly, oversight of the contraceptive pill will be handed to pharmacists. This is not the way to address the shortage of GPs.
Name withheld, West Melbourne

I read with bewilderment that our own Rebecca Vallance, a fashion designer, struggles for acceptance in Australia (Sunday Age, 27/11), then two days later the Australian Open announces that uniforms for its 4000 staff have been designed by Ralph Lauren (The Age, 29/11).
Craig Tucker, Newport

Labor Gaming Minister Melissa Horne needs to educate herself on the real impact and hurt that poker machines are doing to our society. It is astounding that she “supports strengthening” the pub and club gaming industry (Sunday Age, 27/11) and the Coalition’s gaming spokesman, Danny O’Brien, campaigned on “no major changes”. A briefing with Reverend Tim Costello and Professor Charles Livingstone might open her eyes to the opportunity she has to make a difference to the lives of Victorians.
Felicity Browne, Toorak

The racing industry can’t agree on how to improve horse welfare (The Age, 3/12). And most states want to continue sending unwanted racehorses to knackeries and abattoirs. The only way to make this callous group of people see reason is for the caring public to stop attending races and direct their gambling money towards more wholesome pursuits. And governments need to wean themselves off their reliance on tainted gambling profits.
Jan Kendall, Mount Martha

To former Age editor, Gay Alcorn. We just wanted to say thank you and express best wishes to you and your family. We take both The Age and Herald Sun daily but for in-depth articles, and particularly evening reading, it is always The Age. Out of interest, our family has been taking it for three generations. In fact, we have some old copies dating back to 1854.
Barrie and Jenny Dempster, Balwyn

Within just a few days, any hope of a reformed Coalition with its shiny new leadership team has faded away. David Littleproud announces the Nationals’ opposition to the Indigenous Voice before he even knows what is in it. Surely, this is just Barnaby Joyce-lite. Then Peter Dutton fails to support the censure motion against “the bulldozer”, displaying that his loyalty is to party ahead of country. Scott Morrison-lite for all to see. Talk about self-inflicted injury.
Greg Wharton, Doncaster

Show me the detail

”Voice vote about principle, not detail: Dodson” (The Age, 1/2). This is an approach that is highly unlikely to appeal. As a general principle, I for one would never entertain the idea of signing a blank cheque, which is what this amounts to. In any other context, would you, Senator Pat Dodson?
Henry Askin, Hawthorn

A long trek to the city

Re pedestrians reclaiming the streets of Melbourne (Comment, 2/12). My grandfather, who was studying architecture, walked seven kilometres from Northcote to the CBD and then back again to attend night classes in the 1890s. I imagine the roads were not paved and the streets were gaslit.
Jeanne Hart, Maryborough

Jenna Price (Comment, 3/12), in an otherwise finely balanced article, suggests the Higgins-Lehrmann case “has been the court case of the century in this country”, seemingly forgetting about Cardinal George Pell and the multi-faceted elements involved in that saga.
Geoff Warren, Anglesea

Re references to Bridget Arthur (Letters, 2 and 3/12). I expect they mean Bridget Archer MP, not Bridget Arthur AO (a Brigidine sister) who has very decent ethics. (Bridget Archer definitely has demonstrated higher qualities of honesty, ethics and values than those who have gone before her in the Liberal Party.)
Keith Hawkins, Point Lonsdale

Michael Bachelard sends an exclusive newsletter to subscribers each week. Sign up to receive his Note from the Editor.