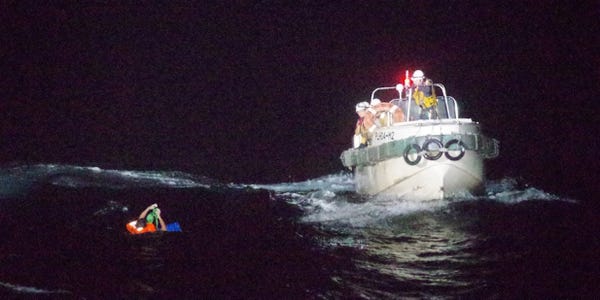 One person has been rescued and another found dead after a cargo ship from New Zealand carrying 43 crew members and 6,000 cattle went missing off the coast of Japan in rough seas, officials have said.

The Gulf Livestock 1 sent a distress signal from the East China Sea on Wednesday night after it got into difficulties caused by Typhoon Maysak.

According to the Japanese coastguard, the man rescued is 45-year-old chief officer Sareno Edvarodo from the Philippines.

Edvarodo was found drifting in a lifejacket and waving in the water on Wednesday night. He told rescuers the ship had capsized after being hit by a large wave.

The 45-year-old said that the rough seas had already caused the ship to lose an engine and that the crew had been instructed to put on life jackets.

Edvarodo said he had jumped into the water but didn't see any other members of the crew before he was rescued. The seaman's wife told the BBC that he was in hospital but in good condition.

In footage of Edvardo's rescue by the Japanese coastguard, the seaman immediately asks about his missing shipmates: "Am I the only one. No other one?" When told he is the sole survivor, he said: "I am so sorry."

Another crew member died after being pulled from the water unconscious on Friday. The Japanese coastguard said the man was unresponsive when he was found about 75 miles northwest of Amami Oshima island.

The cargo ship laden with thousands of livestock left New Zealand on August 14 and was traveling to China — a journey expected to take 17 days, New Zealand's Foreign Ministry has said.

The vessel, which was registered in Panama, sent the distress call from waters to the west of Amami Oshima island in southwestern Japan.

The cause of the distress was not immediately known, but the weather conditions were rough due to Typhoon Maysak.

The typhoon has also been causing devastation in South Korea, with winds reaching up to 87 miles per hour. It is heading for North Korea, South Korea's weather agency said.

Liezel Pitogo, the wife of one of the crew members on board, told the BBC that she last spoke to her husband on Tuesday evening.

Speaking from Quezon province in the Philippines, Pitogo said that her husband Lindon had been worried about the weather conditions.

"His phone was unreachable on Wednesday," Pitogo said, according to the BBC.

"I thought it's just a problem with the erratic signal when they are on the sea but I saw a Facebook post from a seaman's wife about a cargo ship that went missing so I started contacting and asking some of the other wives."

The sister of the ship's captain also said the family had last heard from him on Tuesday evening and that he had informed them that water had entered the ship.

"We were so worried because we know they were in the middle of the sea and there was a typhoon. We saw in the news that he sent a distress call. I don't know anymore what happened," said Maya Addug-Sanchez, according to the Guardian.

"It's agonizing. It's been two days already. We've done nothing but to wait for updates and pray, pray, pray," she added. "I just received news that bodies of dead cows were found. That's the only thing we know.

Both Australia and New Zealand said they were in communication with the families of the crew members and providing assistance.

Officials fear that strong winds and torrential rain from the typhoon will hamper the search operation, as the weather is expected to get worse over the weekend, Higashi said.

The ship's crew included 39 men from the Phillippines, two from New Zealand, and two from Australia.

The search for the remaining 41 members continues.