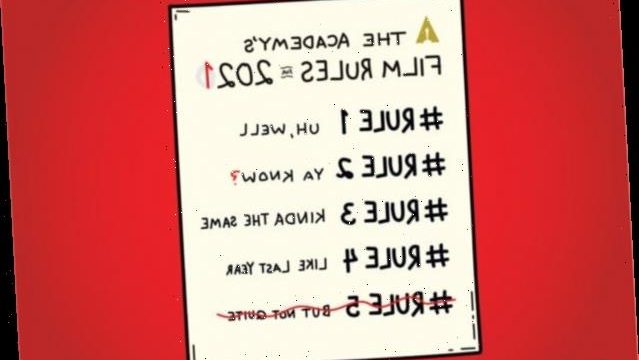 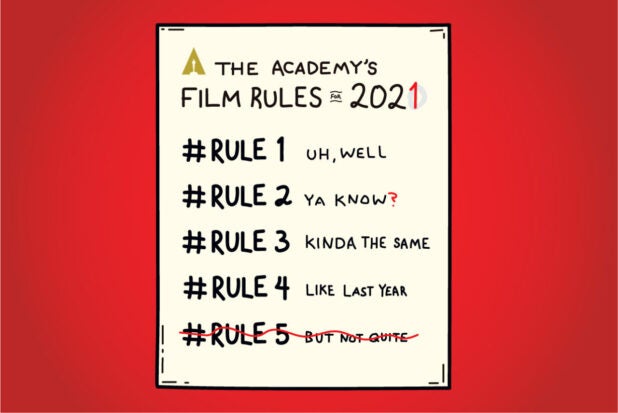 This story first appeared in the Actors/Directors/Screenwriters issue of TheWrap’s awards magazine.

The year 2020 may have ended, mercifully, but 2020’s awards rules linger on. We’re in an extended awards season where streaming premieres qualify as feature films, where viewing is done almost exclusively online and where what were once year-end eligibility deadlines extend well into the new year. And just as Hollywood has to figure out whether the pandemic-related changes to its business — goodbye theaters, hello premium subscription services — are here to stay, so do Hollywood’s awards bodies have to figure out if their new rules are going to turn into the new normal. So let’s look at some of those rules.

NEW RULE Online viewing takes precedence over in-person screenings
HERE TO STAY? Yep
In this case, the pandemic accelerated a change that was going to happen anyway. The Oscars had already decided that 2020 would be the last year that members could request screener DVDs, and the Emmys and guilds had also moved in the direction of online viewing platforms. For the Academy to serve its increasingly international audience, it has no choice but to make the viewing platform more important than the members screenings in Los Angeles (and to a lesser extent, New York), no matter how much those social events were central to building buzz.

NEW RULE Streaming movies can qualify for film awards
HERE TO STAY? Yeah
Even before the pandemic, most awards bodies, including the Oscars, allowed films to qualify even if they went on streaming services on the same day as their theatrical premieres. They’re not going to reverse that rule when movie theaters return.

NEW RULE Streaming-only movies can qualify for film awards
HERE TO STAY? Let’s hope not
There may be some debate on this front, but the urge to go back to the idea of films as theatrical events will likely be strong enough for the pre-pandemic rules to be reinstated. The big question mark is the rule that films can have streaming or TV releases but still qualify for Oscars if they pay for a spot in the Academy Screening Room. At present, more than 200 films had paid $12,500 each to be included in that room, which means that the Academy has taken in more than $2.5 million via that new way to qualify. (Placement in the separate screening rooms devoted to documentaries, animated films, international films and shorts is free, but the Best Picture room costs money until after nominations are announced.)

The desire not to lose that income source could potentially cause the Academy to keep the lucrative loophole — but a lot of films will likely pay to be there even if it’s just for exposure, so let’s hope that the Oscars will sacrifice a bit of money in defense of a stricter definition of motion pictures.

NEW RULE Dates will be flexible
HERE TO STAY? Hell, no
Extending the eligibility dates from Dec. 31 to Feb. 28 seemed like a good idea when the Academy did it in the early days of the pandemic in the spring of 2020, but the virus didn’t cooperate so the new awards calendar didn’t result in a flood of early-2021 theatrical releases. And it led to a weird, stretched season that nobody’s really enjoying.

In this area, everybody is going to want to get back to normal — or, at least, the closest thing to normal you can find these days. That’s bound to make the Academy look for a quick return to the good old calendar year.

Oh, and let’s add one big caveat to all of this speculation: Nothing is going to change until the coronavirus is under control.