Sometimes you can measure progress by what didn't happen.

When Season 22 of the cartoon Arthur kicked off with a same-sex wedding for Arthur's teacher, Mr Ratburn, the US Secretary of Education didn't send the TV network PBS a letter outlining her "strong and very serious concerns". 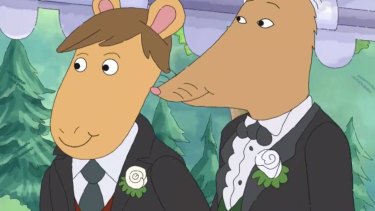 Two male rats on the children’s cartoon show, Arthur, were married in the first episode of Season 22.Credit:PBS

Mr Ratburn and the Special Someone, in which Arthur and his friends attend their beloved teacher's nuptials, first aired on Monday in the US. The students remark upon the wedding cake, their teacher's dance moves and the festive decorations – but never the fact that Mr Ratburn and his spouse are both male.

The episode was met with criticism from some predictable corners. Alabama Public Television, which broadcasts Arthur in that state, refused to show the episode, saying it would "break parents' trust in the network".

Conservative political commentator Sebastian Gorka called it “a war for our culture” and TV evangelist Franklin Graham asked his 2 million Twitter followers to challenge federal funding for PBS, saying the episode is "promoting the LGBTQ agenda". 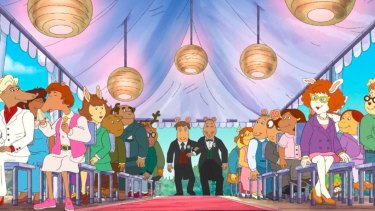 The episode proved largely uncontroversial in the US.Credit:PBS

But, by and large, the episode of Arthur, a cartoon that first aired in 1996, was met mostly with either applause or a shrug.

"I think the biggest surprise about Mr Ratburn from Arthur being gay is that I'm just now finding out that Arthur is still coming out with new episodes," voice actress Erica Mendez tweeted. (The official Twitter account of Arthur liked her tweet.)

In 2005, a same-sex character on a PBS kids' show inspired a far different reaction.

That year, Arthur spinoff Postcards From Buster created an episode called Sugartime! that included a Vermont family with two mothers. Secretary of Education Margaret Spellings, whose department helped fund the program, was having none of it.

"Many parents would not want their young children exposed to the lifestyles portrayed in this episode," Spellings wrote in a letter to Pat Mitchell, president and chief executive of PBS. "Congress' and the Department's purpose in funding this programming certainly was not to introduce this kind of subject matter to children, particularly through the powerful and intimate medium of television."

Spellings requested that PBS remove the US Department of Education seal from the episode, warn station affiliates about the content before they aired the episode and consider refunding the education grants used to create the episode.

"Finally," she wrote in closing, "you can be assured that in the future the Department will be more clear as to its expectations for any future programming that it funds."

PBS didn't send Sugartime! around to its affiliates.

In 2005, a mere 14 years ago, many progressives were still ducking and dodging on marriage equality and equal rights for the LGBTQ community. Australia only legalised same-sex marriage last year. It wasn't until 2010 that former president Barack Obama, a longtime opponent of same-sex marriage, started to evolve on the topic. Former president Bill Clinton was the one to sign the 1996 Defense of Marriage Act into law, allowing states to refuse to recognise same-sex marriages legally established in other states. (The law was overturned by the Supreme Court in 2015.)

Television wasn't devoid of openly gay characters or hosts in 2005 – The Ellen DeGeneres Show was two years old by then, Will and Grace was going strong – but a gay couple on a children's show, apparently, still seemed a bridge too far.

It seems we've crossed that bridge.

Children's shows should look like the world children are growing up in. Kids should be able to see themselves, their families, their neighbours, their classmates and their communities in the characters and the stories they love and lean on for guidance and understanding.

Ideally, children's shows also look a little different than the tiny part of the world children are growing up in. So if they don't personally know a kid in a wheelchair, maybe a show can introduce them to one. If they don't know a lot of kids whose skin is a different colour than theirs, whose faith traditions are different than theirs, whose parents are the same sex, maybe a show can introduce them to some.

Children's shows, like children's books, should be both mirrors and windows.

There are, no doubt, families out there who aren't happy about Mr Ratburn's union. Let's not pretend marriage equality is universally embraced.

Teachers still get fired from faith-based schools for marrying same-sex partners. At an Illionis school last year, music teacher Nathan Etter was reportedly was told to "stick to the curriculum" after his husband sent him Valentine's Day flowers at work, prompting a parent to contact the district with "serious concerns".

Equality for LGBTQ people hasn't fully arrived. But it's on the way. And it's hitting fewer speed bumps. That's cause for celebration.