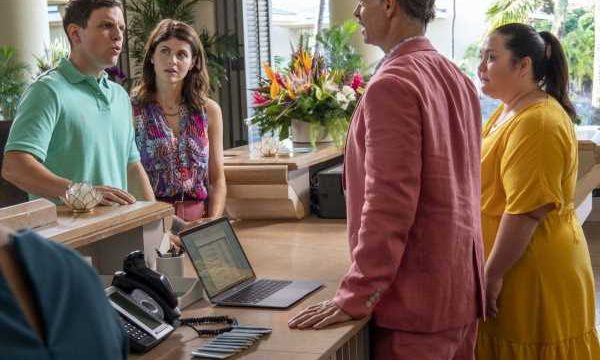 In HBO’s The White Lotus Episode 4, Lukas Gage and Murray Bartlett performed a jaw-dropping rim scene in the tropical paradise resort. However, viewers might be more shocked to find out that the actors were behind the specifics between resort manager Armond and staffer Dillon. Find out exactly how the two actors turned the scene into more than director Mike White ever imagined.

Leading up to The White Lotus Episode 4, viewers could tell that Armond had a thing for Dillon. The resort manager continually commented on his hair and made flirty comments to him. However, in the latest episode, Armond continued his downward spiral of drugs and alcohol. He became unhinged and asked Dillon to “party” with him for whatever shifts Dillon wanted at the resort.

In an interview with the AV Club, Lukas Gage explained how the shocking ending scene in The White Lotus Episode 4 came to be. The actor felt that by suggesting the two men do something besides sex, he and Bartlett brought to life director Mike White’s intentions for the limited HBO series.

“I expect to be surprised by Mike White because he is such a brilliant writer,” Gage told the outlet. “I love that there’s a natural defiance in almost everything that he does. There’s a sense of burning down the system in his writing, and I love that. In this moment, Armond kind of just says, ‘fuck it all!’”

“We said, ‘Wouldn’t it be more interesting if [Dillon’s] getting his salad tossed?’” Gage recalls telling the director. “I mean, how often do we see that on TV? I think it’s much more interesting and more jarring to walk in on.”

White loved the idea, and The White Lotus rim scene was born. Gage also added that the tattoo viewers noticed on him was real, not something created for the show, although it fits perfectly with his personality.

‘The White Lotus’: Who dies?

After watching The White Lotus rim scene with Lukas Gage and Murray Bartlett, viewers wonder if that somehow indicates who dies.

“My new theory is that it’s Armond in the casket,” one fan wrote on Reddit. “[It is] either an accidental overdose or suicide. Rachel, [Alexandra Daddario], leaves Shane because his actions contributed to it, and he can’t empathize with why or feel some guilt.”

Fans guess that Shane walking in on Armond and Dillon leads to the resort manager’s death. Although Armond might not die at the hands of Shane, the demanding resort guest contributed to the manager’s demise.

“[I] Love this theory because it falls back on Shane,” another fan added. “If he could’ve just left his room issue alone, he could still be alive.”

The White Lotus airs on HBO at 9 p.m. EST Sundays on HBO and HBO Max.