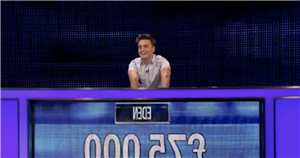 This week The Chase fans were gobsmacked when they saw Eden Nash, 20, win an incredible £75,000 on his own by beating chaser Darragh Ennis.

The nation saw the quizzing star lost for words when he set a new record on the show, and now it has been revealed the sensation had to remain tight-lipped on his victory for a year.

His amazing win was actually filmed in 2020, and avid fans will know that episodes of The Chase are filmed well in advance.

The show is normally filmed several months ahead of the episode's air date, but Darragh Ennis, who was beaten by Eden, has now revealed that the record-breaking instalment was filmed last year.

"Thanks Darragh, top man," replied Eden, before Darragh revealed to his fans: "Eden! You legend!

"Sorry, you've had to sit on this for so long. Pesky pandemic," hinting that Eden's victory had a delay due to the coronavirus outbreak.

"I hope you've gone nuts with the cash, well deserved!"

While Eden didn't reveal what he spent his winnings on, he happily shared: "Hahaha all good here thanks mate, don't worry I've enjoyed myself."

After fans went wild over the star's appearance on The Chase, he tweeted: "The Chase? Completed it mate."

Host Bradley Walsh, 61, was in awe over Eden's victory as he ended Darragh's six-month winning streak, securing the biggest win by a solo player in the show's history.

Eden was the last contestant remaining in his team in the final. He had already made £3,000 in his cash builder round before choosing to aim high and go for the offer of £75,000.

Soon after Eden answered his 18 questions correctly, Bradley blurted out: "I can’t believe it!

Darragh then congratulated him: "You did very well, it was all about the pushbacks in the end."

When the chaser complimented Eden's win on Twitter, fans were delighted by their online exchange with one writing to Darragh: "There is such sincerity in the way you congratulate him it's absolutely lovely.

"I think the fact that you've been a contestant endears you to so many. You're a breath of fresh air on the show fair play."

"You should keep an eye on Eden as he would make a great Chaser," another commented. "Reminded us of when you were on it."

For all your updates on The Chase, sign up to our daily OK! newsletter.