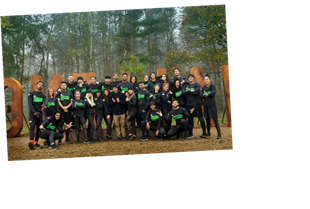 Fresh off a successful season, hit MTV reality competition series The Challenge wrapped up filming in late October. Hosted by T.J. Lavin, the contestants compete in male and female duos and must maneuver a few new twists that should make for another exciting season. Who won The Challenge 36?

[SPOILER ALERT: Spoilers ahead for The Challenge 36.]

Starting competing pairs on ‘The Challenge 36’

Tentatively titled Double Agents, the contestants compete in male-female teams. According to popular The Challenge spoiler, PinkRose, the players immediately had to choose their partners. The starting teams are:

New twists for ‘The Challenge 36’

Last season, the show introduced a Red Skull twist in which the players had to win an elimination to compete in the finals.

Season 36 upped the ante by replacing them with Gold Skulls and giving elimination winners the option to switch partners, including stealing someone else’s.

If one’s partner goes home, that competitor has become a “rogue agent” and cannot compete in an elimination until they have acquired another partner.

Finally, the house vote for a competitor to go into elimination is anonymous instead of a public discussion featured in previous seasons. However, the daily challenge winner has the power to see who everyone voted into the elimination round.

While the following are the elimination matchups according to the spoiler page, it doesn’t necessarily mean the contestants were eliminated in the exact listed order.

Nicole Z and Liv were disqualified due to injuries.

Ashley returned to the competition, likely due to the number of disqualifications.

Natalie quit due to personal reasons; many believe she had an urgent family matter.

Amber M eliminated by Amber B in Hall Brawl

Lolo was removed by producers for an unknown reason.

Gabby eliminated by Nany in a competition similar to “Oh Ring”

Big T eliminated by Amber B

Joseph eliminated by Kyle in a competition similar to “Ring Wrestle”

Nelson eliminated by Fessy in a competition similar to “Hall Brawl”

Mechie eliminated by Josh in a puzzle-based competition

Fessy and Kaycee, the latter of which suffered an injury during the finals, placed fourth, with Nany and Leroy finishing in third place. The second-place finishers, Kam and Cory, received some money, with Amber B. and CT taking home the grand prize.

Amber, a rookie, is the first Big Brother player to win The Challenge and the first Black woman to win the series since 2007. It also marks CT’s fourth victory. The Challenge 36 airs in 2021.