Quentin Tarantino's epic Once Upon a Time in… Hollywood, a lush mix of '60s movie-making, the Manson murders and Tarantino's own brand of gory mayhem, was greeted at the Cannes Film Festival with an audience ovation before the lights had even gone down.

The film he was born to make, according to some of the critics who rushed to tweet as the lights came up again, was the film all of Cannes was dying to see. 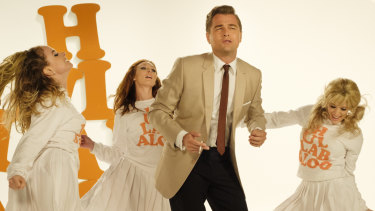 Leonardo DiCaprio as Rick Dalton in Quentin Tarantino’s Once Upon a Time in… Hollywood. The film has just premiered at the Cannes Film Festival.Credit:Andrew Cooper/Sony-Columbia Pictures via AP

Once Upon a Time in… Hollywood was a last-minute addition to the Cannes programme. Everyone knew that Tarantino, whose film Pulp Fiction won the festival's Palme d'Or in 1994, had raced to finish it in time to celebrate his own Cannes silver anniversary.

Anticipation among the 40,000 festival participants was thus huge. Tarantino had been spotted in the audience at several festival films, mostly Asian with martial arts, and even those meagre glimpses amplified the buzz to a roar.

On the day, queues of accredited visitors filled the streets outside the theatres; hundreds of others put on evening dress and stood with signs begging for any spare invitations. Their chances were minuscule. It felt as if the festival had been working up to this screening for a week; nobody would be giving anything away. 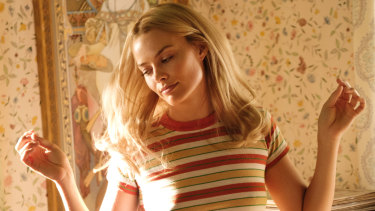 Tarantino had written a letter to viewers, read out on stage before the screening, asking that they also not give anything away that would spoil the film for future viewers.

Set in 1969, Once Upon a Time in… Hollywood is a sprawling hymn to the film industry in its years of ostensible decline, and the torrent of shows that filled network television schedules and the golden hours of Tarantino's childhood.

Rick built on his knockabout experience in Westerns to become the small-screen star of action series with names like Bounty Hunter. But, having done his bit to protect Cuban-heeled cowboy boots from disappearing into fashion's crypt, he is now frequently confronted with the painfully jabbing knowledge of his own irrelevance.

"That his extensively excerpted star vehicles bear some resemblance to Inglourious Basterds and The Hateful Eight makes Rick's gnawing doubts about his career seem almost like an exploration of Tarantino's own creative crisis," observed The Hollywood Reporter. "Or maybe not." 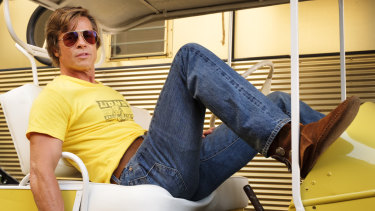 New Hollywood moves in next door in the form of Rosemary's Baby director Roman Polanski and his wife Sharon Tate, a fairytale princess played by Australia’s Margot Robbie. Rick and his wingman Cliff's beer-and-pizza nights are just the jump of a hedge and an entire world away from the Polanski milieu's freewheeling glamour.

Up in the hills, on a ranch where Bounty Hunter's exteriors were once shot, lives the sinister colony of girls and their pack leader Charles Manson – played very briefly by another Australian, Damon Herriman – who keep popping up in central Los Angeles, dumpster-diving for food in their crocheted clothes.

For much of the running time, not much actually happens in Once Upon a Time in… Hollywood. Some critics have complained of boredom, especially during the long pastiche of a Peckinpah-style Western.

"Tarantino has frequently been more a maestro of the linked vignette than a disciplined narrative storyteller, and that's very much the case here as the bulk of the movie zigs and zags through the experiences of Rick and Cliff," said The Hollywood Reporter.

"It's a heady, engrossing, kaleidoscopic, spectacularly detailed nostalgic splatter collage of a film," writes the Variety critic, "which allows Tarantino to pile on all his obsessions, from drive-ins to donuts, from girls with guns to men with cars and vendettas, from spaghetti Westerns to foot fetishism."

What it isn't, concludes the headline, is Quentin Tarantino's masterpiece.