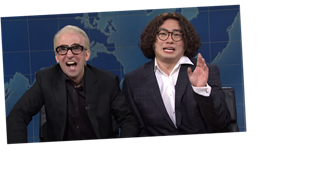 The friendship between filmmaker Martin Scorsese and author Fran Lebowitz recently got an affectionate, quirky treatment in the Netflix documentary series “Pretend It’s a City.” The show is a tribute to New York City from two lifelong perennial New Yorkers. The pair were recently spoofed on this weekend’s episode of “Saturday Night Live” when, during the “Weekend Update” segment, “SNL” cast members Bowen Yang and Kyle Mooney showed up as Lebowitz and Scorsese. Watch below.

In the sketch, Lebowitz and Scorsese are brought onto the segment for their comments about New York Governor Andrew Cuomo announcing that indoor dining could resume, at limited capacity, this coming Valentine’s Day in February. A bespectacled Mooney doesn’t say much except get hysterically dumbfounded, while Yang plays up Lebowitz’s curmudgeonly disposition. “I’ve been so bored at home I was about to get married to my cufflinks,” Yang says. “I’ve done so many interviews in front of audiences, I have squatter’s rights at the 92nd Street Y.”

When Michael Che asks if Lebowitz thinks New York is doing “good” now amid the pandemic, Yang responds, “I love it. It’s the worst. Disgusting. I’ll never move. My friends are inviting me to their backyards for socially distanced gatherings. The only outdoor gathering I go to is the taxi line at JFK. You know why? They let you smoke.”

Yang’s Lebowitz also pines for a time when “everyone in New York City had a machete. You used to be on a subway and you would look at a man’s machete, or his penis. Now everyone’s looking at their phones. You know why? Because there’s nothing to look at!” Mooney’s Scorsese, meanwhile, descends into a meltdown and starts peeling off his eyebrows.

This week’s episode was hosted by John Krasinski (who, during the cold open, lip-locked with “SNL” cast member Pete Davidson while delivering his opening monologue) to kick off the second half Season 46. The musical guest featured was Machine Gun Kelly. Other upcoming guests including host Dan Levy with musical guest Phoebe Bridgers, and host Regina King with musical guest Nathaniel Rateliff.