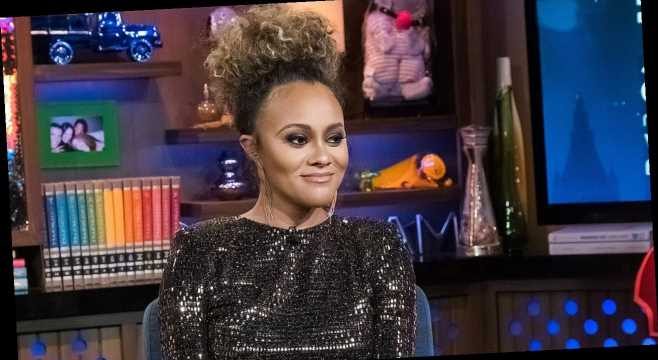 The ladies of Potomac have arrived in Portugal — and Ashley Darby appears to have brought some relationship baggage with her overseas.

On Sunday's episode of The Real Housewives of Potomac, the then-new mom prepared for the cast trip to Portugal while dreading the thought of leaving her baby son, Dean, behind. Nervous about leaving Dean for several days — something she hadn't done since giving birth — Ashley enlisted her close friend, Eve, to take care of Dean during the day so that her husband, Michael Darby, could put their son to bed after he came home from work.

In addition to coping with her "anxiety" about leaving Dean, Ashley, 32, also worried about Michael's ability to "behave" while she was away.

Earlier in the season, Michael admitted to visiting a strip club and doing something he "regrets." The two had since been working on their marriage by attending therapy sessions together.

"Dean and I are going to spend a lot of time together," he said while playing with his son on Sunday's episode.

"Are you going to behave while I'm gone?" Ashley asked her husband, to which he responded, "Absolutely."

"One of the things you mentioned was that sometimes you just need to talk and get it out before you make a decision that you don't want to make, so you can call me," she told Michael, adding that she'd answer the phone at any hour despite the time difference. Then Ashley took off to Madeira, Portugal with her RHOP costars — Gizelle Bryant, Robyn Dixon, Dr. Wendy Osefo.  Karen Huger and Candiace Dillard. Missing in action was Monique Samuels, whom Ashley reluctantly didn't invite on the trip following her altercation with Candiace.

Back in November 2019, both Monique and Candiace accused each other of second-degree assault, filing complaints directly with the District Court of Montgomery County in Maryland. In December, however, the Montgomery County State's Attorney's Office informed lawyers for the costars that they would not be pursuing their ongoing cross complaints. Upon the girls' arrival to their luxe accommodations in Maderia, the group kicked off their trip with a welcome dinner — and drama was served up. Wendy and Karen took their ongoing spat from Potomac to Portugal, continuing to argue about the CNN contributor's education and four degrees while Karen also pressed Gizelle about her relationship with her ex-husband-turned-boyfriend, Jamal Bryant.

But the conversation hit home for Ashley after Gizelle, 50, asked how things were between the yoga lover and her husband.

"There were a lot of things we hadn't talked about," Ashley explained as Wendy, 36, asked if she worried about "something" happening while the group was away.

"No, that doesn't bother me. I'm more understanding about the circumstances," Ashley said. "I wasn't being the supportive wife that I had been."

Robyn then jumped into the conversation, telling Ashley, "I want you to stop taking responsibility and putting the weight on you being a new mother, and trying to navigate that. He needs to support you because this is something new that you're going through."

Robyn, 41, who has said she has dealt with infidelity in the past, opened up about her experience in a confessional, saying that Ashley needed to hold Michael "accountable" for his actions.

When she was a "new mother," the Embellished designer said, "I didn't have the energy to care about what my husband was doing, and I'm getting that from Ashley. But she's got to hold him accountable."

Later in the evening, as Ashley prepared for bed following dinner, the anxious mom called her husband to check in on her son, but he failed to answer the phone.

She then called Eve, who answered and told her that Michael hadn't come home yet. Worried about Michael's whereabouts, Ashley called her husband a second time.

"Where are you, honey?" she asked before explaining that Dean needed to be put down for bed.

"Okay, but I'm away and I'm normally the caretaker for Dean …. and you also didn't tell Eve that you were going to be a little bit late," she said, arguing that it was 7:11 p.m. and Michael was supposed to be home at 7 p.m. to put Dead to bed.

"I can't do this. I'll call you when I get home. … I can't be molested like this. This is crazy," he said before hanging up.

A frustrated Ashley then sat on her bed in tears. "I just want to go home," she said. "I miss my kid."

But the disappointment didn't seem to last too long. The following morning, Ashley revealed to Karen that while she had a tough night and was "upset" with Michael, they were able to resolve the issue.

"Last night Michael was supposed to be home, but he had to work, and it upset me because the baby has a routine," she told Karen. "So I lashed out at him and he called me back … now I see I overreacted," she said after a flashback clip showed Michael returning her call and apologizing.

"Was that it was?" Karen asked. "The last time you left Michael, he wasn't where he was supposed to be. Was that a part of it?"

"No, that actually wasn't a factor this time," Ashley said firmly. "It was a moment of growth, because I actually think he heard me and understood me and it made me realize, I'm really grateful for my husband."

In her confessional, Karen said she was "concerned" for the new mom: "Michael being late shouldn't send you into that tailspin. And she needs to deal with the level of pain Michael has caused her during this marriage."

Next week, Candiace — who has been writing daily affirmations to herself, per her therapy sessions following the fight with Monique — is hoping to move forward in her relationship with Ashley. But it appears any hope of their reconciliation is put on the back burner after Ashley decides to tell Candiace that she is writing a statement in defense of Monique — revealing that in growing close with the Not for Lazy Moms founder, Ashley shared with Monique that she and Michael have "had other partners together." The former pageant queen went on to say Monique didn't tell anyone until Ashley herself told all the ladies during their winery outing.

"Over the past few months, Candiace and I have made some progress in our friendship, so because of that, I have to tell her that I wrote the statement in defense of Monique," Ashley explained in a confessional on Sunday's episode. "And rather than hear it from anyone else, I want Candiace to hear it from me."

In the trailer for next week's episode, Ashley tells Candiace why she wrote the statement, saying, "I did it because I am worried about what can happen to her."

Candiace is then seen crying and yelling at Ashley, "F— you."