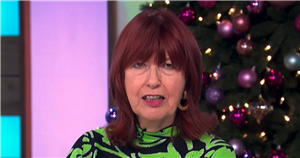 The pair were back on our screens on Monday (November 28) alongside Brenda Edwards and host Coleen Nolan.

They kicked off the programme by showing off the studio's festive transformation, including two extravagant Christmas trees.

To mark the occasion, each of the panelists dressed to impress in glitzy outfits.

While Coleen and Kelly donned glitter and sequins and Brenda dazzled in a red blouse, Janet opened to wear a more subtle black and green jumper with a leaf print.

Kelly rushed over to Janet after pointing out that she looked like the lights on Janet's tree.

Janet seemed unimpressed when Kelly wrapped her arms around her and gave her a massive hug.

It comes after Janet took aim at Coleen during a previous episode of Loose Women.

Janet told viewers about one incident where she unexpectedly started her period as the panel erupted into hysterics.

"I'm going to walk to the toilet as if it’s perfectly natural to walk like that with my legs together," Janet demonstrated as she pretended to hold a newspaper over her bum to hide a leak on her way to the loo.

"It happened to me once in a very posh London restaurant," she said.

"What your legs together?" Coleen interjected, much to the amusement of the audience.

"Come on she’s been married four times," the ITV star went on as the audience and panel burst into laughter.

“Okay, pig person,” Janet quipped back, referencing a later show talking point about being "piggy in the middle" in arguments between others.

"Alright, all I’m saying is that every woman watching this will have had that moment, that leakage moment. And it’s not something that happens like it does in the ads."