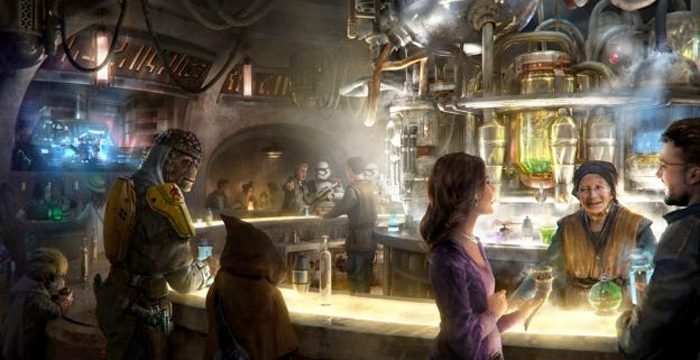 At the main entrance to Disney’s Hollywood Studios, a reproduction of L.A.’s Crossroads of the World monument has long welcomed guests into the park with the familiar sight of its Art Deco tower and Mickey Mouse globe. Now Hollywood Studios itself is at a crossroads, celebrating thirty years of operation even as its original theme of a working movie studio gives way to new lands and attractions.

My family and I were at the park on May 1, 2019, the thirtieth anniversary of its opening, and my wife and I were there on May 4 for the After Hours Star Wars Day event (where giant video screens on either side of the Chinese Theatre displayed the greeting, “May the 4th be with you.”) Since the opening of Star Tours in 1989, Star Wars has been a growing presence at Hollywood Studios, but this was actually the very last Star Wars Day before the grand opening of Star Wars: Galaxy’s Edge later this year.

That land promises to be a game-changer for Hollywood Studios. Here’s an on-the-ground look at the changing face of the park at this moment in time before it undergoes a major upheaval.

On May 1, my wife and I park-hopped into Hollywood Studios: riding the 2 p.m. Friendship Boat over from Epcot’s International Gateway, where construction continues on the upcoming Disney Skyliner gondola station. Based on their design, there’s good reason to fear that the lack of air conditioning in the gondolas could turn them into high-flying, butt-baking ovens in Florida’s sweltering summertime. However, in addition to linking several Disney hotels with Epcot and Hollywood Studios, the gondolas should provide a scenic aerial option for hopping between those two parks in the cooler months of the year.

Attraction-wise, our first half-day at Hollywood Studios was filled mostly with shows, including Muppet*Vision 3D, the Indiana Jones Epic Stunt Spectacular, Beauty and the Beast – Live on Stage, and Fantasmic! (all of which have been around for years). We saved thrill rides for the After Hours event on May 4. This was my wife’s first time in the park, and though it would mean missing the special 30th anniversary parade that morning, we wanted to avoid the huge anniversary crowds. My sister, for instance — who had ventured into the park earlier than us that day — spent about an hour and a half just waiting in line to get some 30th anniversary merchandise like T-shirts and a tumbler. She also nabbed us a couple of commemorative guidemaps.

On Hollywood Boulevard and Sunset Boulevard, Disney Photopass photographers were taking people’s pictures with 30th-anniversary signs showing the date and the words, “I was here!” We posed for one of those with the Chinese Theatre in the background. This was my first time visiting Hollywood Studios since The Great Movie Ride closed in August 2017 (read /Film’s tribute to the ride that month here), so it was a bit bittersweet walking by the Chinese Theatre and seeing its courtyard empty, with posters for the future Mickey & Minnie’s Runaway Railway attraction posted outside.

At the Indiana Jones Epic Stunt Spectacular, you can still see the remnants of the park’s original theme as a working movie studio … for now, at least. This will soon change, as the show is reportedly set to go dark from 2020 to 2021 and receive an update that eliminates the faux production element, whereby a casting director, second unit director, and Harrison Ford/Karen Allen stunt doubles come out to explain some of the behind-the-scenes work that goes into the movie magic the audience is about to see. That element is one that held more novelty thirty years ago, back before DVD featurettes and the Internet helped proliferate behind-the-scenes material, so that it’s now more common knowledge how movies are made.

While it remains to be seen how exactly Disney will reinvent the show, it doesn’t necessarily feel like it would be such a loss if they cut out some of the explanatory fluff in the Indiana Jones Epic Stunt Spectacular. One other element that it might be sad to see go, however, is the part where they recruit audience members into the show as extras. When I was young, my mom got chosen to be an extra once, and that’s a memory I never forgot. Much like the erstwhile SuperStar Television — whose theater is now inhabited by a Frozen sing-along — I imagine there are a lot of other park guests with similar memories tied to their own participation, or that of their family members or friends, in the Indiana Jones show.

In the background at the Indy amphitheater, we could see where the Disney Skyliner had begun doing test runs for the day. Most of the gondolas were covered up with white wrap, but the sight of them moving along served as a reminder of the park’s evolving transportation system. In addition to the aforementioned Friendship Boats, they’ve also still got trams running out to the parking lot and buses departing for hotels; but this trip was the first time for me to see Walt Disney World’s polka-dotted Minnie Vans (available through the Lyft app) riding around and picking up/dropping off guests.

Before we left Hollywood Studios on May 1, we also walked around in Toy Story Land during the day and enjoyed a character dinner with my parents and sister at the Hollywood & Vine restaurant. On our way out of the park, they were handing out free 30th-anniversary posters to guests.

On the evening of May 4, we entered the park with separate tickets for the special Star Wars Day After Hours event. The event actually started at 9:30 p.m., but if you don’t have regular park tickets for that day, they’ll let you through the gate at 7 p.m. for After Hours. We had some time to kill so we did the Voyage of the Little Mermaid show on standby and then ate at the ‘50s Primetime Cafe. The live-action elements of the Little Mermaid show still held up but the animated clips looked extremely dated, with the image quality being on par with a VHS transfer. This is another show that could maybe use an update, if only to give it a digital HD makeover.

As for the ‘50s Primetime Cafe, dining next to an old black-and-white television with clips of The Dick Van Dyke Show and the like still held nostalgia value for me, but the restaurant’s theming also impressed my wife, who is not from the states and doesn’t have the same Nick at Nite/TV Land frame of reference for American sitcom reruns. When Hollywood Studios first opened, people who grew up in the 1950s, like my parents, were middle-aged. Now they’re retirement age and we’re another generation removed from that time period. I found myself wondering if the ‘50s Primetime Cafe would continue to stand the test of time or if, in the future, Hollywood Studios might have something like a ‘90s-themed restaurant, with reruns of Seinfeld and Friends showing instead.

While not cheap, the After Hours event was worth it for the unimpeded movement and quick access to rides in Toy Story Land. Currently, all three rides in the new land are Tier 1 Fastpass attractions (meaning regular park guests can only book one of them as their three initial Fastpasses). Yet we were able to do all three of them in a relatively short amount of time that night. We knocked out Toy Story Mania and Alien Swirling Saucers with only about a 5-minute wait for each; the longest wait we had, at 15 minutes, was for Slinky Dog Dash (that’s the ride that, at present, usually has all of its Fastpasses booked up by hotel guests before the 30-day window for other park guests even opens).

After hours on Star Wars Day meant that Star Wars characters were out in full force (or Force, if you’ll forgive the pun). In the Animation Courtyard, there were all sorts of droids rolling around, including a mouse droid and R2-D2 himself. Rogue One’s black Death Troopers were also there and there was a black, C-3PO-esque protocol droid, possibly meant to be the character 0-0-0 from the comics. Inside Star Wars Launch Bay, the usual characters like Kylo Ren and Chewbacca were joined in new pairings at their meet-and-greet spots by Captain Phasma and Rey. Darth Vader was on hand, as well, and we got photos of a couple of rare Jawas in front of the Cantina bar counter.

Star Tours: The Adventures Continue was a walk-on that night. There were Ewoks doing character greetings under the Ewok Village, but with them boasting a 25-minute wait during a 3-hour event, we unfortunately had to skip meeting them. Inside the attraction, they had Imperial Stormtroopers directing guests to their lines. Add to this the random cosplayers and the Star Wars music playing throughout the park, and it felt we were getting an early taste of what it might be like to walk around in Star Wars: Galaxy’s Edge … minus the sure-to-be-insane crowds, of course.

As we strolled down Sunset Boulevard that night toward The Twilight Zone Tower of Terror, it was overlaid with projection-mapping of the train heist sequence from Solo: A Star Wars Story. Again, I found myself wondering about the future of this attraction, whether it might not someday be updated to reflect the new Jordan Peele Twilight Zone, or whether it might follow suit with its former cousin at Disney California Adventure and undergo a ride revamp to become Guardians of the Galaxy – Mission: Breakout!

With Aerosmith no longer ruling the radio and rock ‘n’ roll now relegated to something of a musical subculture, it wouldn’t surprise me if the adjacent Rock ‘n’ Roller Starring Aerosmith underwent a re-theme, either. After taking a quick spin on that ride and Tower of Terror, our last attraction of the night was the new Lightning McQueen’s Racing Academy in Sunset Showcase. We took in the 9:30 p.m. showing and then hit up a few gift shops on our way out of the park before catching another one of the Friendship Boats back to the nearby Dolphin hotel, where we were staying.

On a personal note, this was my first trip to Walt Disney World since I spent over a year writing /Film’s weekly Theme Park Bits column. That column is in good hands now with Josh Spiegel, who has written more about the 30-year history of Hollywood Studios here. For me, having tracked the development of things like Toy Story Land and Lightning McQueen’s Racing Academy from week to week, it was interesting to see some of that stuff up close in the park.

As it continues to be revitalized with new E-ticket rides like Millennium Falcon: Smuggler’s Run and Rise of the Resistance, Disney’s Hollywood Studios promises to be a very different place in the coming months. August 29, 2019 isn’t that far, far away, and the next time you or I visit, we may be staying at a Star Wars hotel that has its own entrance to the park.