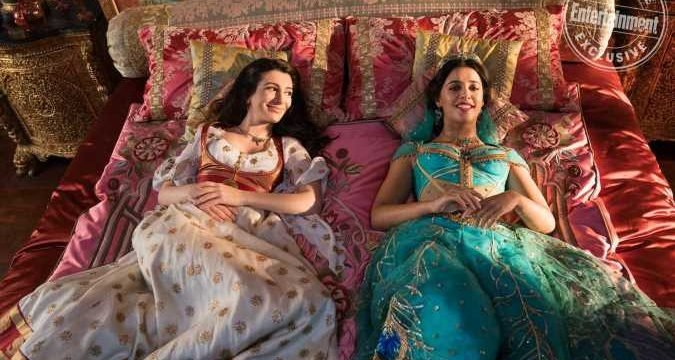 When Nasim Pedrad dressed up as Princess Jasmine in her iconic turquoise costume and sobbed over having sex with Iago (yes, Iago the parrot) in the Saturday Night Live sketch “The Real Housewives of Disney” in 2012, little did she know she would end up playing a much bigger part in the world of Aladdin.

Pedrad, 37, enters Guy Ritchie’s live-action Aladdin remake as the newly created character Dalia, a quirky, lovable handmaiden to Princess Jasmine. For the former SNL actress, who said she had been dressing up as Jasmine as a child long before her SNL days, Dalia was the role of a lifetime.

“I can’t even tell you the amount of full circle moments relating to me being in this movie,” Pedrad told EW. “I’m Iranian-American and so for me, growing up a child, there weren’t many portrayals of Middle Eastern cultures in Hollywood at the time so to see that in the animated version as an Iranian-American girl and identify with it was hugely impactful.”

Dalia has her foot in the two worlds of Agrabah, Pedrad said, living with the citizens in the city but spending most of her time at the gilded palace, where Jasmine has been long sheltered by the Sultan for her protection. As Jasmine’s confidante, Dalia is “very honest and sassy and generally terrified of Jasmine getting herself into trouble,” Pedrad said, adding that the handmaiden is like an older sister to the motherless princess.

“Aside from her pet tiger Rajah, it made sense that Jasmine would have a human girlfriend to confide in,” Pedrad explained. “I thought there was a real opportunity there to show this very loving relationship between these two women.”

And of course, you can’t bring on Pedrad and not expect a strong dose of comedy. In the 1992 animated Aladdin, the bulk of the comedy lies in Robin Williams’ Genie, but in Ritchie’s version, while Will Smith’s Genie leads the comedy, the burden of delivering the laughs is spread around a lot more, especially with Dalia. In the first palace scene where Jasmine tells Dalia about wanting to be a leader to her people and not just have to marry any old prince, it’s Dalia who delivers the “You just have to marry him, you don’t have to talk to him” gem. Shortly after, as Aladdin sneaks into the palace to return a bracelet to Jasmine, still believing that she is the handmaiden and not the princess that he met in the streets of Agrabah, Dalia has to pretend to be the princess for a moment and pulls off a wonderfully awkward scene in which she takes her leave, saying: “I have to go clean my cat now.”

“Jasmine’s really strong and in the face of tradition can be a bit of a rebel, which is where Dalia comes in and makes sure she’s keeping her out of trouble,” Pedrad said. “The new version of the movie I think just takes everything we love about the original and brings it into the modern era.”

Dalia is also part of a new storyline for Genie as his romantic interest – a pairing that results in some hilarious highlights in the film. “When you have that rapport with someone and you’re given the opportunity to open up the takes and play with the material a little, we found a lot of fun little moments that way,” Pedrad said.