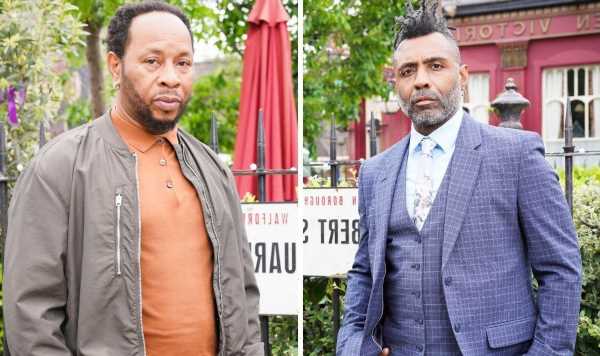 Mitch Baker (played by Roger Griffiths) has become a popular family man in EastEnders after he arrived in Walford in 2018. However, his past has remained relatively mysterious. Official spoilers for the BBC soap confirm Mitch will be confronted by some trouble from his former life though, as his brother Avery (Omar Lye-Fook) turns up on the Square. Clearly the total opposite of Mitch, some secrets are bound to spill out. Could Mitch’s estranged son also arrive?

Spoilers confirm Mitch’s brother and nephews will soon make their way to Walford.

When he arrives, it will immediately be clear Mitch’s charming older brother Avery couldn’t be more different from him.

Almost always on the verge of causing trouble, Avery will immediately cause heads to turn.

The newcomer will be joined by his two sons, Felix (Matthew Morrison)  and Finlay (Ashley Byam).

The youngest of the two brothers, larger than life Felix will throw himself into life in Albert Square, but with his quick wit and frank honesty, he’ll be sure to stir up some drama along the way.

Older half-brother Finlay has a different biological dad but was raised by Avery soon after birth.

He has sailed through life using his cheeky charm but is set to face a wake-up call as he begins life in Walford.

Could Mitch be Finlay’s biological dad? Perhaps he is hiding a dark secret from his past which meant his brother ended up raising his child.

Despite also being the complete opposite of each other, Felix and Finlay present a united front and always have each other’s backs.

While Mitch dearly loves his nephews, it’s fair to say he has a complicated relationship with his brother after not speaking to him for years and Avery’s unexpected arrival is set to cause some issues for Mitch.

Realising there must be a reason for Avery suddenly coming back into his life, Mitch is determined to get to the bottom of what’s going on and find out what secret Avery is hiding.

Could Avery be about to spill Mitch’s long-kept secret to the rest of his family?

It could be that Avery feels it’s time for Finlay to find out the truth.

Maybe Mitch walked out on his son when he was born, and Avery stepped in to help.

With Mitch clearly concerned about his brother’s sudden return, there is bound to be something he is worried about coming out.

At the moment, Mitch lives with Karen Taylor (Lorraine Stanley) and the two seem close to starting up a romance again.

Tragically, Mitch only found out recently that his daughter Chantelle Akins (Jessica Plummer) died at the hands of abusive Gray Atkins (Toby-Alexander Smith).

He also has a young daughter still living with him, Bailey Baker (Kara-Leah Fernandes).

If Finlay is also his son, the news will definitely come as a shock to the rest of the Baker family.

Karen, who has suffered her fair share at the hands of lies recently, may even kick him out of the house, unable to trust him.

If Mitch does turn out to be Finlay’s dad, what else could he be hiding?

It’s likely he has a dark past and it may all start with his secret family.

Soap bosses have indicated the new arrivals will certainly stir things up on the Square.

Chris Clenshaw, an executive producer at EastEnders, said: “The Baker Family bring a fresh, fierce, fun and exciting energy to the Square.

“Felix and Finlay are two very different firecrackers and, yes, these brothers fall out, take the mick and challenge each other, but none of that compares to their unswerving love and loyalty they have for one another.

“They may be charming young men, full of sass, swagger and strength but these brothers are Bakers and, like their father, Avery, have their own unique way of surviving.

“Omar, Matthew and Ashley all bring star quality to EastEnders and we’re excited to see them bring Avery, Felix and Finlay to life.

“The Baker family are the just the start of some new faces landing in Walford later this year – so watch this space.”

EastEnders continues on Tuesday at 7.30pm on BBC One.