In Hollywood, celebrity families are prevalent. There are tons of famous clans thriving in the spotlight — so many that it’s hard to keep count. Sometimes, the family connection is obvious, like in the case of Owen and Luke Wilson, Jake and Maggie Gyllenhaal, and Elle and Dakota Fanning. Other times, it’s hard to tell, like with Florence Pugh and Tony Sebastian, and Jonah Hill and Beanie Feldstein.

There are also instances where people think celebrities are related just because they share the same last name. Mandy Moore and Demi Moore are definitely not related, and neither are Denzel Washington and Kerry Washington. It can be tough to identify and keep track of which celebrities are part of which families. Take Stephen Amell and Robbie Amell, for example. You might recognize Stephen from the TV show “Arrow,” while Robbie has appeared on shows like “True Jackson, VP” and “The Flash.”

The two hunky actors share a last name, but are they related? Keep scrolling to find out!

Stephen and Robbie go way back 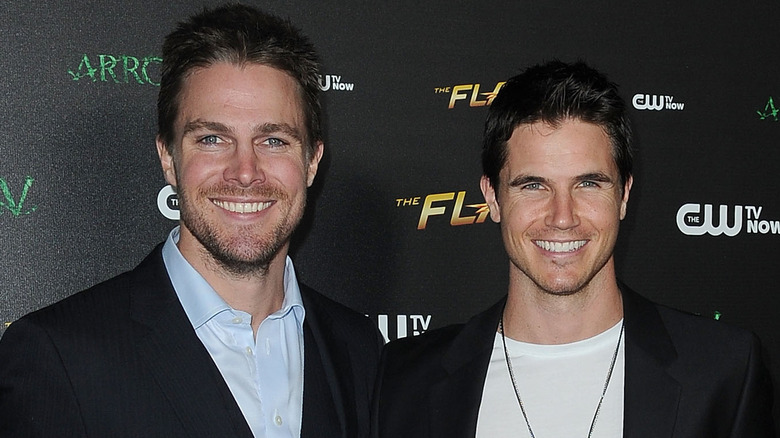 Both hailing from Canada, Stephen Amell and Robbie Amell are indeed related. Per the International Business Times, the two are paternal cousins, and they were seemingly pretty close growing up. They had such a tight relationship that Robbie used to borrow Stephen’s I.D. when he was underage in order to get into clubs.

In an interview with Lilly Singh on “A Little Late with Lilly Singh,” the Amells dished about some of their most mischievous moments in their younger years. They shared that since they resemble each other, Robbie used to pretend to be Stephen to get away with things. “We were at a family dinner and I was like, ‘Hey, do you have an I.D.?’ And he’s seven years older than me, so I was 15 pretending to be 22,” Robbie shared in the interview. “I’d hand it to a bouncer and he’d look at me, and he’d be like, scan it, it’s a real I.D., hand it back to me, let me in the bar.”

Apparently, Robbie is still possession of that I.D. to this day. “I still have it somewhere,” he added. “It’ll be worth something someday.”

Robbie encouraged Stephen to try for out for Arrow 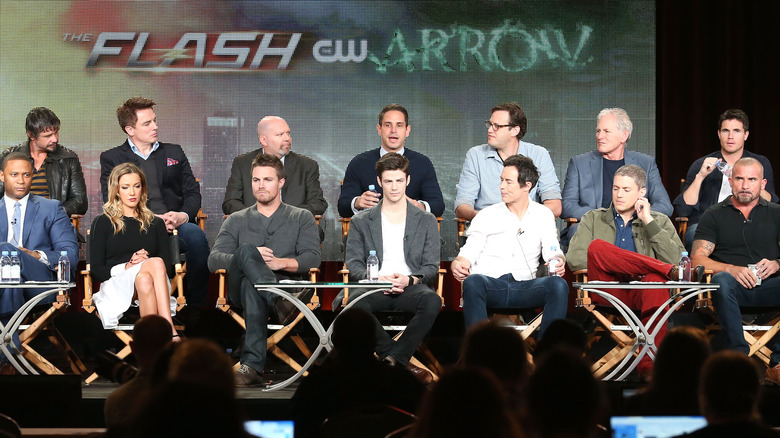 At this point, Stephen Amell is almost inextricable from his role as Oliver Queen/Green Arrow on “Arrow,” but what most people don’t know is that Robbie Amell read the script first and thought Stephen was a better fit for the role.

During a sit-down with Larry King, Robbie recalled the time his agent sent him the script for the CW show. “Steve got ‘Arrow’ first, but the interesting thing is that I read it first,” he shared. “My agent sent it to me and I read it, and you always picture yourself when you’re reading something, and I pictured Steve.”

He then pitched the idea to Stephen during a Los Angeles Kings hockey game. “I was like, ‘Hey, have you read ‘Arrow?” and he was like, ‘I don’t know what that is,” he recalled. “They sent it [the script] to him. My agents phoned me, and they were like ‘What’d you think?’ And I’m like, ‘I think my cousin’s going to get it.”” And the rest, as they say, is history.

The Amells love working together 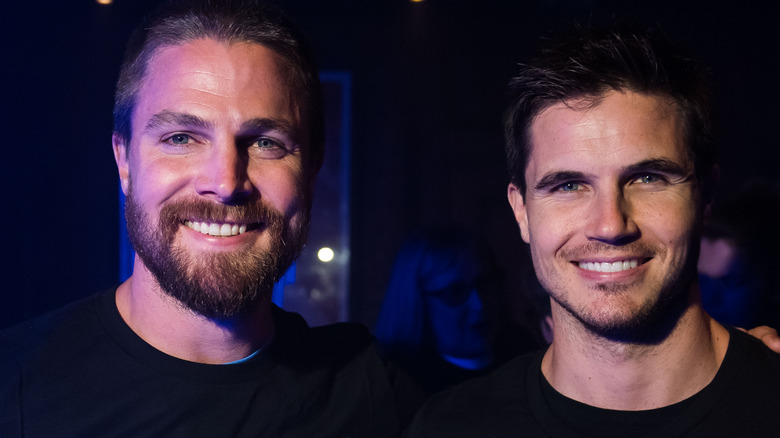 Stephen Amell and Robbie Amell don’t just love being cousins, they seem to love being co-workers, too. In June 2021, it was announced that after the success of their film “Code 8” — which just so happens to be one of the largest crowdfunded original films of all time, per Deadline — the two are teaming up for a sequel. “There’s nothing better than working with family and friends,” Robbie told the outlet. “‘Code 8’ was the embodiment of that. I can’t wait to get back to work on the sequel.”

Stephen added, “‘Code 8’ is an incredibly personal and special project for all of us.” He continued, “We built the world in the first one and now we’re ready to blow it out!”Given the success of their first joint project, we wouldn’t be surprised if the Amells work together after the “Code 8” sequel is finished. That being said, even if they never happen to work together again professionally, they’ll at least be able to catch up at the next family reunion.