Andrew Neil, 72, was on hand to host another edition of his weeknight news programme and on the agenda were a number of topics. One such conversation that arose during the latest episode of his GB News show was about British television content being disrupted across the world for the likes of the EU and the world to enjoy. However, he stipulated when it comes to broadcasting rules, the UK’s European neighbours might still be “envious” of how much the nation is able to produce and how Brexit could have an impact on broadcasting rules in the future.

The political broadcaster said to the camera: “European content must make up most of the air time on terrestrial channels. Even giant streams like Netflix are regulated.

“At least 30 per cent of their content available in Europe has to be European,” the presenter explained before addressing the relationship between Britain and the EU.

“There’s a big element of envy in all of this. The UK is by far the largest producer of TV and films in Europe.

“There are more British shows on Netflix shown in Europe than from any other country. Netflix wouldn’t be showing them if there wasn’t an appetite for European audiences.

“Too often, the default position of the EU is if we can’t compete, then let’s regulate,” the broadcaster continued. 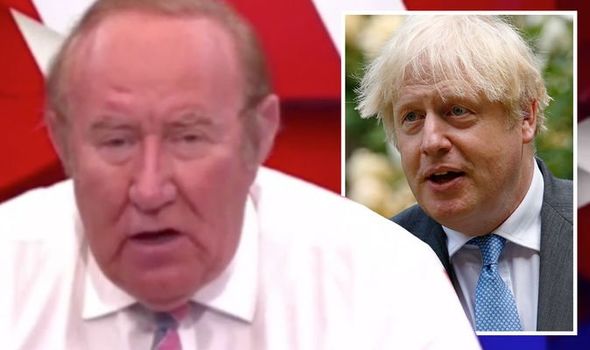 Continuing his speech, Andrew said: “The EU sees itself as a regulatory superpower, it certainly isn’t in any other sense.

“Many of the current broadcast rules across the continent are set by the council of Europe, whose membership is far wider than the EU.

“But there are EU members who want Brussels to play a bigger role and protect their own broadcasters from British competition.

“Nothing much will happen before 2024 and it may come to nothing at all. Not all the EU wants to be denied the right to British broadcasting.”

Addressing the elephant in the room that is Brexit, he added: “But you can’t help thinking we will never be forgiven for what Boris Johnson calls our friends in Europe for the temerity of voting to leave the EU in 2016.”

Taking to Twitter, viewers of the programme shared their opinions on the matter and whether they think it could add more tension to the relationship between the UK and the EU.

One wrote: “The EU wants to limit the number of British and American shows in Europe. It’s only the French-speaking nations that have an issue with this.”

“They won’t accept that English is the dominant language globally in terms of first and second language spoken #GBNews,” they continued.

Andrew also spoke about the latest developments with regards to the coronavirus pandemic and it looks like the final set of restrictions being lifted could happen next month.

With the vaccination rollout seeing all adults receiving their first jab by July 19, 2021, the political broadcaster explained that he thinks lockdown could finally be coming to an end.

The presenter said: “The vaccines continue to work their magic. They hugely reduce the chances of contracting Covid and even for the unlucky vaccinated few who do, they are 96 per cent effective at stopping severe illness and hospitalisation.”

“The link between Covid cases and high hospital admissions has effectively been broken,” he continued to explain.

Andrew added: “Almost nine out of 10 adults now have Covid anti-bodies, which is getting close to herd immunity.

“By July 19 — our new freedom day — all adults will have had their first jab. And all over 40s their second.

“So matters will have to deteriorate rapidly and substantially in the next few weeks for restrictions not to be removed on July 19.”