While it was considered a formality, the final vote endorsing Brisbane as host city of the 2032 Olympic Games came back with a convincing 75 votes in favour and five against. To have such a celebrated global sporting event come to Australia for a third time is cause to rejoice.

With the delayed Tokyo Games finally getting off to a shaky start, the International Olympic Committee must have been desperate to show that for all of its present challenges, its future is in good hands. Having already awarded Paris the Games in 2024, Los Angeles in 2028 and now Brisbane in 2032, it has done that. 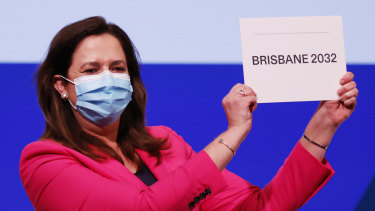 Annastacia Palaszczuk celebrates after Brisbane was announced as the 2032 Summer Olympics host city.Credit:Getty

Even before the pandemic struck, the IOC was moving towards a more sustainable long-term model. After a chaotic 2016 Games in Rioand an embarrassing selection process for the 2022 Winter Olympics – four of six bidding cities dropped out, mostly because of a lack of support at home – the IOC needed to end its expensive and, at times, corrupt process for selecting host cities.

Brisbane has become the first beneficiary of the new selection process. Two commissions made up of IOC and non-IOC members have talks with potential host cities, running feasibility studies and ensuring costs are manageable. Then they make a recommendation to the IOC executive board, which selects a preferred host. Then all the IOC members vote on it.

The new process has not been without its detractors. In what some have seen as a conflict of interest, the new system, which started in 2019, was established by sport powerbroker John Coates, an IOC vice-president and head of the Australian Olympic Committee.

In an unedifying display of his power, after Brisbane was awarded the Games Mr Coates castigated Queensland Premier Annastacia Palaszczuk for saying she was not going to attend the Tokyo 2020 opening ceremony. She soon changed her mind, telling ABC Radio Brisbane that Mr Coates was “laying down the law” and “I’m just going to do what John Coates said”. Coates said later she had been in on the “joke”.

With Brisbane handed the mantle of host city, it now faces the daunting task of making the Games happen. A feasibility study suggested Queensland could host them for a net cost of about $900 million once domestic revenue and IOC funds were taken into account. Given previous enormous cost overruns that countries have been burdened with, that would seem overly ambitious.

But Brisbane does already have many of the stadiums built and, with the Gold Coast and Sunshine Coast nearby, has an enormous supply of accommodation at hand. Some have suggested that while Brisbane could host most of the events, spreading the load among other cities could also help share the cost. Another option being floated is limiting the time athletes and auxiliary staff are at the event, opting for a fly-in, fly-out system. In a post-pandemic world, there is going to be pressure on budgets for many years to come.

After more than 18 months of watching sport with minimal live crowds, the notion of thousands of athletes entering a stadium before a throng of onlookers is hard to imagine. For organisers of this year’s Tokyo Olympics, it would be inconceivable.

Brisbane winning the bid to host the Olympics is a timely reminder that for all the challenges of COVID-19 before us, life will eventually return to normal. The Brisbane Olympics of 2032 will be a time to celebrate together, without masks or social distancing restrictions, one of the greatest sporting events on the calendar. The crowds will be there, as will the hopes of many nations.